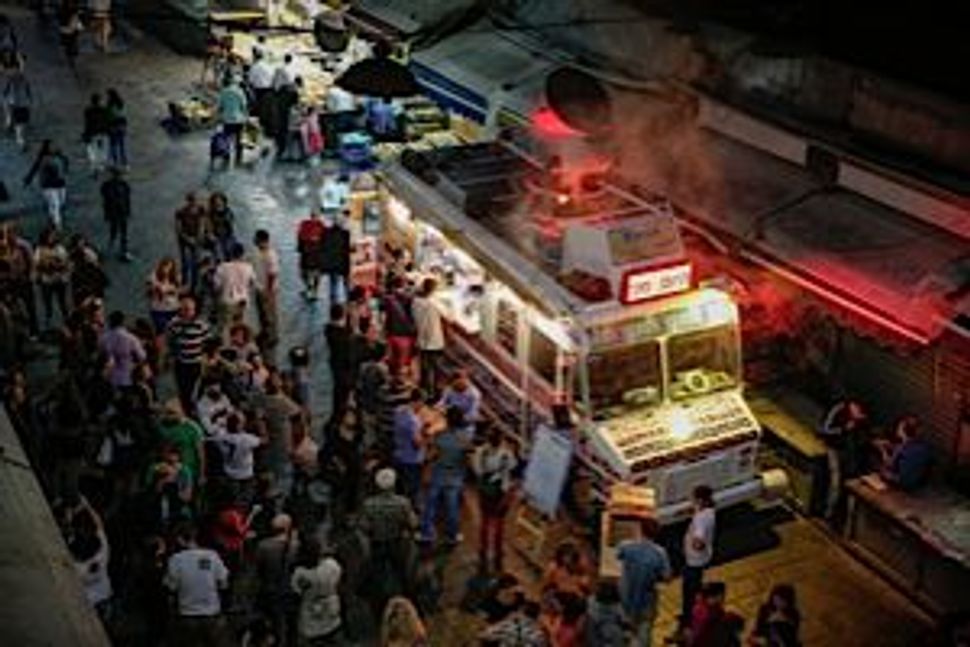 Dinner Time: AutoOchel stops at one of 25 different places around Jerusalem where locals can feast on food from chef Assaf Granit. Image by Tal Shahar

Food trucks seem to be ubiquitous these days — but not in Jerusalem. Until last week, a food truck had never rolled into the Holy City or into any city in Israel. But on July 17 a truck with a giant steaming pot sculpture on top and a chalkboard menu on its side, pulled opened its doors to feed hundreds of Jerusalemites.

Part public art and part performance the “AutoOchel” (food vehicle), which is captained by local celebrity chef Assaf Granit, is about much more than just food. For 25 days this summer (July 17-August 12), the truck will stop in a different neighborhood and serve a different dish each day. The locations and dishes are closely matched, and reflect the personal connections that 25 well-known local personalities have to the city. Each day, one of these participating celebrities will ride along with Granit and help him prepare and serve their special dish to the public.

The “AutoOchel” was conceived as a major event in the third annual Jerusalem Season of Culture, a summer showcase of Jerusalem’s flourishing arts scene and contemporary cultural treasures. Granit cooked up the idea with JSOC artistic director Itay Mautner. The two worked together closely on every aspect of this carefully choreographed “FoodTrip,” (as JSOC has translated “AutoOchel.”) 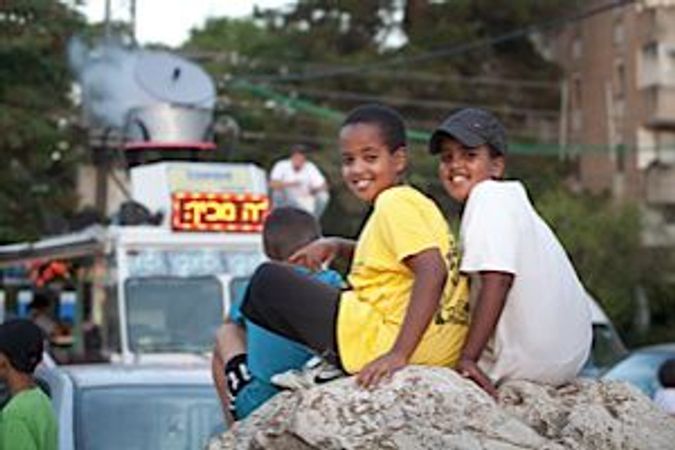 Local kids watch the scene that gathers around the AutoOchel in the Katamonim neighborhood in Jerusalem. Image by Yael Ilan

While visiting Israel, I couldn’t wait to see the truck in action. I made sure to be on hand on Sunday at 5pm as it pulled in to a parking lot on Haneviim Street in central Jerusalem, opposite Ethiopia Street. The special guest helping Granit serve customers through the truck’s window that day was Dana Weiss, a Channel 2 news presenter who grew up on Ethiopia Street. She asked Granit to prepare Gado-Gado, an Indonesian noodle, chicken and vegetable dish with a peanut sauce that her Dutch grandmother learned to cook while living in Indonesia.

When Weiss was growing up, Ethiopia Street was part of a diverse neighborhood. Smells wafting from kitchens weren’t always that of frying schnitzel. “In my childhood, I saw a lot of different people arriving to Jerusalem,” she told The FoodTrip blog. “There was a special atmosphere of multiculturalism and acceptance of others.”

Regardless of whether they were aware of Weiss’ backstory, customers were enjoying the Gado-Gado served up in Chinese takeout boxes stamped with the AutoOchel logo. “This is excellent,” said Paz Ben-Nun as she ate together with her friend Dan Eran. “This is a great way to taste new food and meet new people. I will definitely go to some of the other stops coming up.”

Meira Weiss and Michael Jacobs, who live nearby, made sure to arrive 15 minutes early. “We heard it was going to be mobbed,” Weiss said. Indeed, a line had formed before service began, and the scene in front of the truck (where some informal seating was set up) was buzzing for the two-and-a-half hours it took to serve the 300 portions Granit and staff from his Machneyuda restaurant had prepared (all of the food is kosher and halal).

Granit has been pleasantly surprised at how easy and pleasant it has been to work with the various public figures, including broadcaster and comedian Jackie Levy, Ladino singer Yasmin Levy, ex-basketball player Pepe Turgeman, noted East Jerusalem chef Kamal Hashelmon, and Women of the Wall’s Anat Hoffman. “They all have great ideas and wonderful food memories,” he told The Jew and the Carrot. He is especially glad that egos have not gotten in the way of his creating his own interpretations of their suggested dishes.

Granit has left a few recipes untouched, like Azura chef and slow food aficionado Elran Shreffler’s meatball and green bean stew with rice, which was served on July 17 in the working class Katamonim neighborhood. “But I’m doing my own interpretation of about 90% of the dishes,” Granit said. In most cases, it has a lot to do with creative presentation. He plans on serving a tomato and eggplant stew in bowls made of small challah loaves, and embellishing a traditional Russian potato quiche with a shot glass of borscht set in its center. 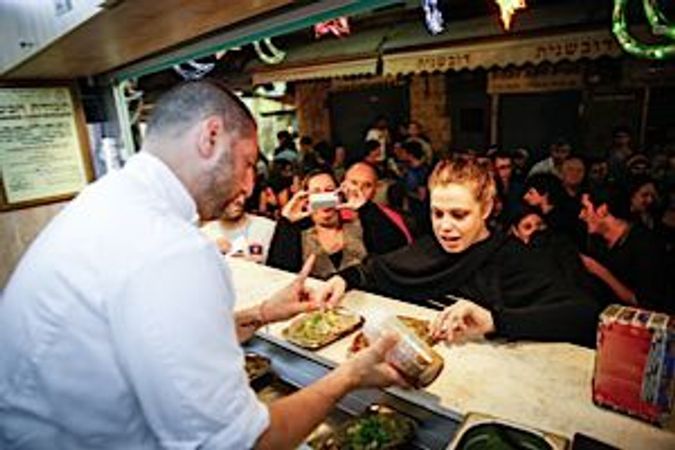 Chef Assaf Granit serves up his take on Jersualemite?s favorite foods outside of the city?s famed Machaneh Yehudah. Image by Yael Ilan

The aesthetics go beyond the presentation of the food to the truck itself. Everything from the disposable serving dishes and containers to the staff’s t-shirts to the garbage cans is decorated with the “AutoOchel” logo. And then, there’s also the huge steaming pot sculpture on the truck’s roof, festive lights framing the serving window, an LCD message board above the driver’s cab, and a blaring sound system.

The truck’s extreme pop-up nature adds to the artistic sensibility. The public finds out where the truck’s next stop will be merely a day in advance. People can either sign up to be notified by text or email, or they can check the “AutoOchel” website. It is only then that they find out not only where the truck will stop, but also who the special guest of the day will be. “The slow reveal creates a secret, a surprise. There is a hidden meaning to be uncovered,” Mautner explained, perhaps alluding to the Holy City’s many ethnic and cultural layers that give it its unique flavor.

Plans are in the works to take the journey even further — all the way to a Jerusalem cookbook, which is expected to be out around Passover 2014.