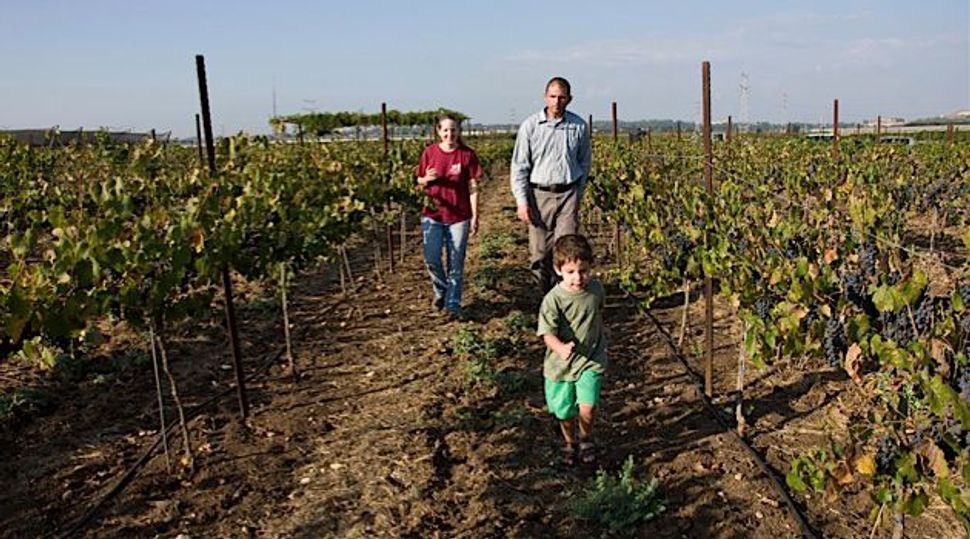 Walking Among the Vines: The only employees of Somek Winery are Barak Dahan and his wife. When the time comes to harvest the grapes, friends and volunteers gather to help out the family. Image by Kurt Aviv

Located on a small street in the picturesque village of Zichron Yaakov, a few blocks away from the town’s touristy promenade lined with cutesy stores and cafes, one finds Barak Dahan’s small house, with a sign for Somek Winery pointing toward the backyard.

Behind the home, alongside the family’s cages for pet doves and children’s toys is an old fashioned barrel press and picnic tables for visitors. The backyard operation isn’t what you would expect of a winery that produces bottles coveted by some of Israel’s top chefs.

Dahan, who is a tall, athletic-looking man in his 50s, is proud of the fact that the winery is in his backyard. He is the fifth generation of his family to tend this vineyard. His grandfather’s grandparents emigrated from Romania in 1882, settling in the area along with 51 other families in the wave of initial Jewish immigration to Palestine known as the First Aliyah. The group was the beneficiary of the patronage of wealthy Jewish aristocrat Baron Edmond de Rothschild, who founded the Carmel Winery to help the struggling settlers support themselves by growing wine grapes. For a century and a half, Dahan’s family has cultivated 40 acres of land, selling crops to Carmel and other major wineries in Israel.

Dahan grew up listening to dinner table discussions of the market value of grapes and the weather’s impact on the quality of the season’s crops. “Every time we decided to plant a new vineyard it was a big family event, because we knew it was a big decision you would live with for the next 10 to 20 years. It was like every new vineyard was a new part of our family,” he said.

Ten years ago, Dahan decided to move beyond the long-standing family farming tradition and branch out from the art of grape growing into the winemaking process itself. He embarked on the adventure with his wife, Hila Dahan, who prepared herself for the new business by studying viticulture and oenology at The University of Adelaide, in Australia.

Initially, Dahan and his family, who are the only people to work at the winery, planned to focus their winemaking on bottles they would serve at their dinner table. “Our primary goal was and is to enjoy the activity of making it and enjoy the wine,” Dahan said. “That’s all. The tastes of the wine aren’t adjusted to the preferences of the market; we make wine that suits our own personal taste and style. We make our wine like you would make a piece of art.”

A decade later, the family project has evolved into a midsized boutique winery that produces 12,000 bottles of an impressive variety of wines annually, including cabernet sauvignon, cabernet franc, merlot, syrah, malbec, grenache, mourvèdre, petit verdot, petite syrah, chardonnay and semillon.The winery has received particular attention for its carignan, a lesser-known varietal that’s a medium-bodied red with hints of black fruits and black pepper.

With no investment in advertising or publicity, strictly by word of mouth, Somek has won fans that include some of Tel Aviv and Jerusalem’s top chefs, who snap up his bottles to serve at their restaurants. The fact that the winery is small, and quantities of the wine are relatively limited, adds to its cachet.

Somek (which means “blush” in Hebrew) had a leg up on the other boutique Israeli wine “start-ups” of the past few decades because of Dahan’s family’s legacy. Dahan had the luxury of choosing what he considered the best vineyards on his family’s land to dedicate to growing the grapes for his own winery. Today, 10% of the family farm is dedicated to growing grapes for Somek and the other 90% of the vineyards continue to supply the big wineries like neighboring Carmel, which dominate the local market.

“We take care of [the Somek vineyard] in the best possible way.… We very much believe in the grapes, and less in other things that you do inside the winery afterwards. That’s why we invest the most resources in the vineyard itself,” said Dahan.

When they are ready for harvest, the Somek grapes are picked by friends, family and volunteers and are pressed in the Dahan backyard using a barrel press. Then they are moved to oak barrels for fermentation with buckets; not through tubes, as happens to the wine in large wineries.

Dividing his time between his vineyards and the winery, Dahan has long days, and he is never off duty. Sitting for this interview in the backyard operation, he is interrupted by a customer — one of his neighbors, an event planner who needs several cases of wine urgently for an upcoming party. He gets up, pulls up a trolley, loads them up and takes them to her car. He apologizes for the interruption, then smiles and says: “I can tell people a million times that I only sell wine at certain hours and they have to set up appointments, but you know Israelis — they can’t deal with that. They just come over.”

About half of his wine is sold out of his backyard storage facility to private customers: locals, like his neighbor, restaurants, and the foreign and Israeli visitors. The winery has also begun to export through an agent called Israeli Wine Direct, a dealer in the United States specializing in Israeli boutique wines.

Right now, the facility includes an indoor room for the barrels, a small office, outdoor picnic tables for tasting and a warehouse. Renovation work is under way for a reception area and an indoor tasting room, both adjacent to the family home. The new rooms will better serve the increasing flow of tourists, both Israelis and foreign, who come to Somek to get what Dahan said is “a different experience” from what they’d get at a large commercial winery. He pointed out that “here, I am the one doing the tour and the explanation. The guests get to hear it from the winemaker himself, not a hired guide.”

And that is exactly the way he likes it and wants it to stay. Unlike most small business owners, Dahan says he harbors no big dreams of growing and expanding. The whole point of his family going into winemaking in the first place, he says, was to enjoy the luxury of keeping it intimate: “It all comes from our love of wine and a desire to create a small family winery that we would enjoy operating. We wanted to work here alone and live in the place where we work, to make it a part of our life.”

Allison Kaplan Sommer is a writer living in Israel and a frequent contributor to the Forward.