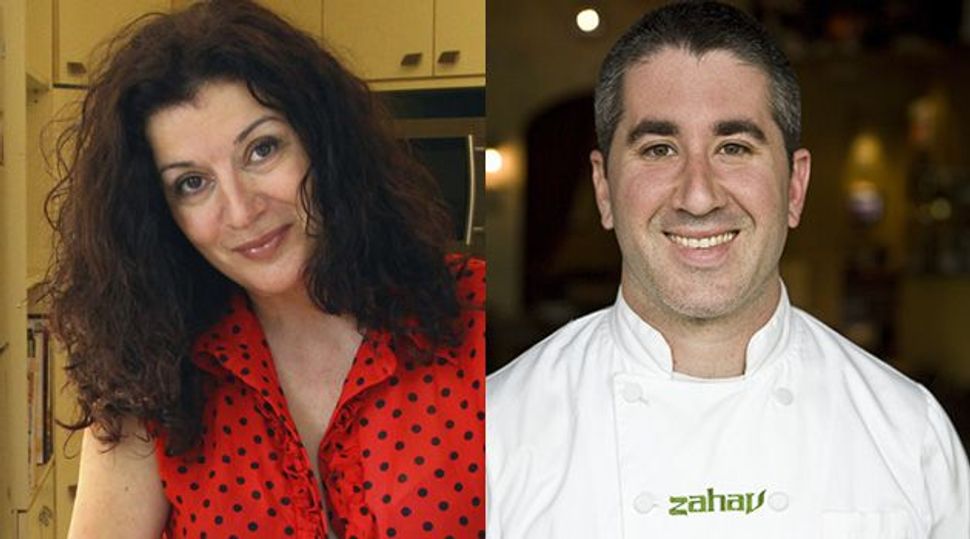 The word cuisine is typically used in conjunction with great cooking traditions that are centuries old — French, Chinese, Persian. But, increasingly the term “New Israeli Cuisine,” is appearing in newspaper articles and on food blogs. Is Israel old enough to have its own cuisine? And, with such a large immigrant population, could a single coherent palate possibly exist? I was hungry to find out. Enter Janna Gur, the editor of Israel’s leading food magazine, “Al HaShulchan” (On the Table) and Michael Solomonov, the chef and owner of Philadelphia’s acclaimed Israeli restaurant Zahav. Nearly seven thousand miles apart, Gur and Solomonov have witnessed and influenced the development of this nascent cuisine as it finds its identity. I recently spoke with them about what drew them to this food, who can claim ownership of hummus and how they would explain Israeli cuisine through a single meal.

Devra Ferst: What drew each of you to Israeli food?

Janna: This is something that happened just by accident for me. I was studying and working as a flight attendant, and became interested in food — mainly in eating it, and then I married a publisher, with whom I started food magazines, mainly professional journals for chefs working in the industry, and then I fell in love with food.

We were lucky because we started the magazine [“Al HaShulchan”] in the early ’90s, when the whole big Israeli food revolution exploded. We were very privileged to document it and, I guess, in a way influence it.

Michael: It’s pretty accidental for me, as well. I grew up in the states but was born in Israel, and I was the most difficult eater. I didn’t really get into food until I dropped out of college and ended up moving back to Israel. I got a job at a bakery, mostly because that was the only place that would hire me… and fell in love with cooking in Israel.

After that I moved to the states and went to culinary school and worked in a few restaurants in Philly. At that time my brother was killed in the military in Israel. After that I returned to Israel and cooked for his army unit in Metula, and something happened on that trip…. I struggled a lot with what I was going to do. From that moment on I started cooking food that I found in Israel. I’m not sure that it was a conscious decision.

How is Israeli food today different from the way it was when you first became interested in in it?

Michael: Instead of Israelis going out and working in Italy and France or the states and going back and cooking those cuisines, they are taking the cuisine they grew up with and now they are proud of it. That’s what’s happening; that’s what’s so exciting.

Janna: What’s interesting is that modern Israeli cooking is taking all these local traditions — it could be Arab and Palestinian, or Jewish ethnic — and mixing them all together, adding touches and twists and creating their own dishes.

What’s so cool about Israeli cuisine is that it’s not a cuisine yet; it’s so new, so in the making. We have this amazing freedom to do basically what we like, and it doesn’t always work, because when you have too much freedom it can be catastrophic. But if the chef is good, then some very exciting dishes would come out of his or her kitchen.

Are there hallmarks of contemporary Israeli cooking outside of the restaurant kitchen?

Janna: One very important thing about Israeli food culture is that people actually cook here; they have family dinners, Friday night dinners every week. All of the extended family comes.

Michael: It’s so good to hear you say this, Janna. It’s’ so important, and especially Shabbat dinner, even just family dinner, it’s multigenerational; it’s so normal to sit at a table with someone’s family with many different age groups and demographics.

Israeli food outside Israel has never been as popular as it is today. Why is that?

Janna: Mike, you are very open and proud of the fact that Zahav is an Israeli restaurant, unlike some of my restaurant friends from Israel in New York, who opened very Israeli places but they didn’t call them Israeli places. They called it North African, like Cafe Mogador in the East Village, or Eastern Mediterranean…. Now, I think — correct me if I’m wrong — it’s changing. Israeli cuisine gets a lot of attention.

I believe that one of the reasons that Israeli cuisine became so popular in the states is a book called “Jerusalem,” written by two expats living in London [Yotam Ottolenghi and Sami Tamimi], — one Israeli Jewish, the other Israeli Palestinian. Their book managed to capture people’s imaginations about Israeli food. Even though they are amazing chefs, I’m not sure what they have is truly Israeli cuisine. Because they have been living in London for years, their perspective is different. Their flavoring is different which doesn’t make it less good, but different. What I’m saying is that what ultimately got people interested in Israeli cuisine is two chefs working abroad, and maybe that’s not accidental, after all, because maybe they understood better how to communicate this cuisine globally.

Janna: When you are abroad you feel a greater need to define yourself and identify yourself.

Janna, what’s the most exciting thing going on in Israeli kitchens? Are there any new really exciting dining spots in Tel Aviv or elsewhere?

Janna: There were no very, very important restaurant openings in the last year. I think we are in the middle of a process: There is a change of generations… the culinary revolution started here in the late ’80s and early ’90s. And chefs that started out then, they are all in their early 50s.

But now there is a new generation of people who are in their late 20s, and they grew up with the revolution. They are less into gourmet cuisine, fine dining, expensive and exotic ingredients, but more into truly local cuisines, not only influences from Palestinian cooking or Jewish ethnic cooking, but traditions that were born here.

Okay, so then here is another question for you: What is the relationship between Israeli food and Palestinian food and food from other Arab communities. Is hummus Israeli?

Janna: Hummus is Israeli and it’s of Palestinian origin, and that’s not a contradiction. It’s Israeli because it’s in Israel and Israelis love it and they even export it now, but I don’t think there is a single Israeli in his right mind that would claim that it’s anything but Arabic. And I would say not just Arabic, I would modify it and say it’s Palestinian.

It’s interesting, in the ‘70s we didn’t even have the term “Arabic restaurants”; we called it “misaada mizrahit” which is kind of Oriental. What you had there was basically shish kebabs, French fries and hummus. This was not even close to what Palestinians actually cook. The next step was restaurants that, in addition to the shish kebab, served more authentic dishes, like stuffed lamb neck or green wheat, and these introduced the Israeli public to more local cooking. This was very influential on Israeli chefs.

Now, there are the first attempts to try and create something which is kind of the equivalent of new Israeli cuisine: new Palestinian cuisine, where they take iconic local dishes like maqluba and try to modernize them, make them kind of more sophisticated, and we are seeing some of this, as well, and it’s really interesting.

If you had to explain current Israeli food to somebody, not through words but through a meal, what would you serve the person?

Michael: I think the home is probably the easiest way to do it, and I’d use my father’s house in Kochav Yair as an example just because there are so many different things happening there: Romanian and Bulgarian kebabs; stuffed eggplant and chopped salads; sometimes mango, because they have it in the backyard. They go to the neighboring Arab village and get incredible shawarma and chicken with sumac and great hummus and pitas in addition to the sourdough bread that we also have because we are serving Balkan food with chopped liver, and then my half-brother-in-law makes the best rice, crunchy rice. It’s so good, and he cooks it with dill and black-eyed peas and he puts some turmeric in there, as well, and then he makes gondi [Persian dumplings] with chicken, huge gondi, and then he will stew beef with saffron or sweet things. And they also make the rice with the prunes and the dates.

At the end of the meal, my father’s girlfriend takes lemongrass from her backyard and she makes tea, and that to me is kind of the Israeli cuisine. My great-uncle is always playing Shesh Besh and there are pastries lying around and to me that’s how you explain it, so many different things happening at once in one place, with tradition, and there is this sort of real-time generational thing. You see history happening not only with culture, but also with food in front of your eyes, and it’s a beautiful thing. I think its pretty unique.

Janna: I must say that this meal that you just described is extravagant, even by Israeli standards. I would love to come over for dinner. It sounds incredible.

Janna: Thank you. Well, I thought about something much simpler but iconic in a way. The first thing that came to mind when you said “an Israeli meal” was breakfast, because this is the most Israeli meal for me, and if I were to choose one dish that epitomizes the Israeli food culture it would be salad, because we are such huge salad eaters and vegetable eaters.… I would have this meal in one of the seaside cafes in Tel Aviv, and there you would have this amazing salad which is actually Arabic salad, which was elevated to its current position through the kibbutz dining halls. There would also be** shakshuka, on the side some white cheese, gvina levana,which is very simple and humble, and a glass of fresh orange juice.

And then amazing bread, because Israelis are bread lovers and we had this amazing bread revolution. That, for me, is the quintessential Israeli meal: very simple; very vegetable based; eaten in the morning, near the beach, and then you have enough room in your stomach to go have dinner at Michael’s house!

This interview has been edited for content and length.