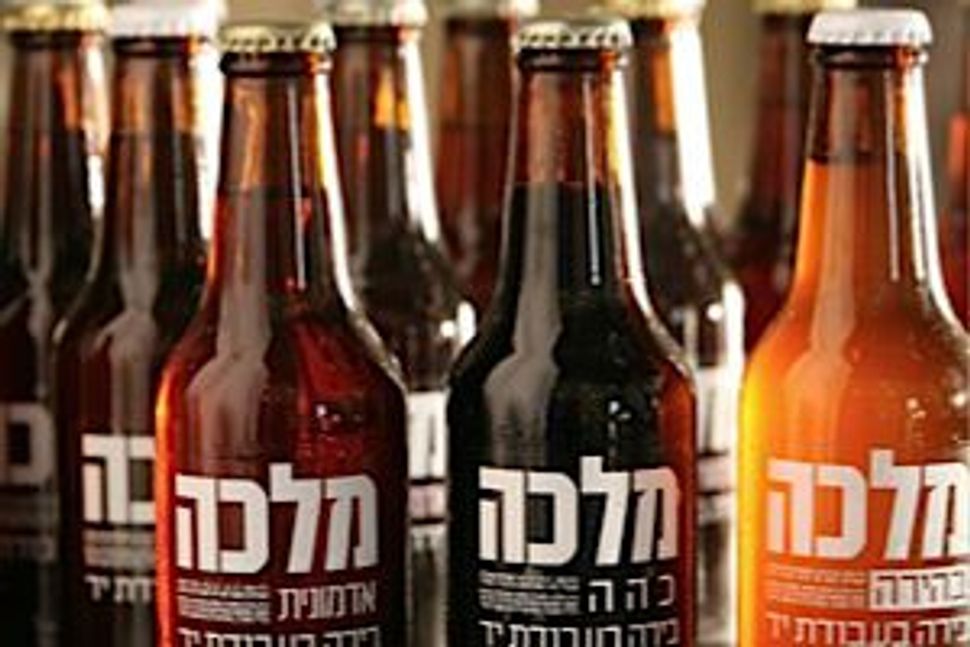 Image by courtesy of malka beer

Israel’s beer culture has developed considerably over the past few years, with dozens of small boutique brewers appearing and the first beer expo being held in 2011. Malka Brewery, located at Kibbutz Yehiam in the western Galilee, was one of the first boutique breweries.

Brewer Assaf Lavi and his brother Dan founded Malka in 2006 when Lavi left Tel Aviv for northern Israel. In Tel Aviv, the two brothers had run bars which have since closed. Outside the city, Lavi wondered what he would do next, and his brother suggested he make beer, Lavi recalls. By 2008 the brewery was manufacturing beer commercially. Assaf Lavi makes the beer, and Dan Lavi, still based in Tel Aviv, is responsible for Malka’s sales. Now, that beer will be sold in the United States via

The brewery has four beers — a blonde ale, a pale ale, a stout and a wheat beer. For now, only the first three are being imported to the United States. The importer, Sublime Imports, plans to launch the wheat beer next year.

Israel is not particularly known for its beers. Like many people in Israel’s small local brewing scene, Lavi has a tie to a country where the drink is more popular: He spent five years living in London. “I learned to drink there,” he recalled.

Speaking while 10,000 liters of his beer were on a ship making its way across the Atlantic, Lavi cited a few reasons as to why he’s interested in taking his beer abroad.

“The market in Israel is very small. Here people drink 14 liters per person a year. It’s very little,” he noted, quoting a figure often cited by industry members. But Lavi also mentions Israel’s high taxes on beer, which he says make it hard to be competitive locally. In other countries, that’s less of an issue.

Malka is partnering with Sublime Imports, a small company based in Dallas, Texas that focuses on beers from the Mediterranean region. Sublime, which launched in 2012, also represents two Spanish breweries and currently distributes about 10,000 liters a month, said owner Mike Hammond. Malka is the importer’s third brewery.

Sublime found Malka after Hammond’s business partner, Austin Clar, tried the beer while living in Israel for a year. The timing worked out, as Malka’s Lavi was also looking to partner with someone to bring his beers beyond Israel’s borders.

Hammond says initial sales of Malka to bars and restaurants won’t be too difficult due to the novelty of an Israeli craft beer. Currently, the only Israeli beers he’s seen in the United States are mass-market Macabee and Goldstar.

“People in the U.S. are highly intrigued by craft beer and Israeli craft is something the vast majority of people have never tried or even knew existed,” said Hammond.

As an importer of boutique brews from a region not known for its beers, Hammond isn’t concerned that Malka will have trouble competing against the thousands of beers available to U.S. consumers.

“One of the best things about the American consumer in general is their willingness and desire to try new things, especially new beers, and Israeli craft beer will be new and incredibly interesting,” he said. “We as a boutique importer believe that we will compete at first on the uniqueness and quality of the beer and its origin and then, over time, developing a consistent and steady following of the brand.

“Malka Blonde, for example, is unique with complex flavors and a little higher than usual alcohol by volume for the style, but it is well hidden, which is a sign of a well-brewed beer,” said Hammond.

Both Hammond and Lavi acknowledge that American Jews are a natural target audience for the Israeli brand, which still has a good amount of Hebrew left on its U.S. labels. But both say they hope people will ultimately buy the beers for their quality and flavor.

“We don’t filter, we make sure it’s very much as was once made. Everything is made naturally,” Lavi said. Like other Israeli beers, Malka is made with imported hops and barley; the Israeli character comes from the local water and brewing.

Hammond is planning to launch Malka beer on the East Coast this month. If all goes as planned, the beers will be available on the West coast by next year.

Hammond says it’s too early to say which stores will sell the beer. But several have already expressed interest and his company’s beers typically are sold in stores including Whole Foods.