He’Brew’s Finally Brewing Its Own Brews 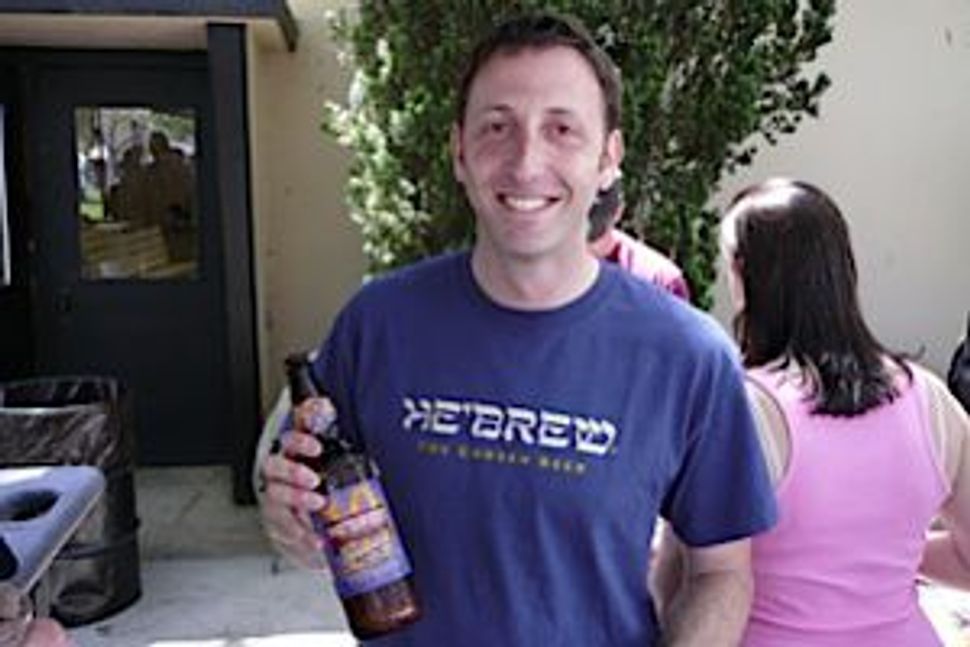 After 17-years of contracting out their beer brewing, Shmaltz Brewing Company, known for its award-winning HE’BREW craft beers, has finally moved in to its own brewery in Upstate New York. With the new space, there’s a lot of new developments on tap.

In honor of the new facility’s opening this summer, Shmaltz’s sole proprietor Jeremy Cowan and consulting brewmaster Paul McErlean came up with the company’s first-ever Black India Pale Ale. “Huge, rich, roast-y…a lot of chocolate. We wanted to make the malt profile extremely forward…an incredibly complex black malty beer that was hopped as much as we could possibly get in there,” is how Cowan described the brew’s flavor in a [3] shot at the brewery’s grand opening celebration.

Fittingly, the brew was called “Death of a Contract Brewer,” and it holds to a shiva (the seven-day Jewish mourning ritual) theme, with seven malts, seven hops, and seven percent alcohol by volume.

Cowan, 44, promises that he will continue to employ his Jewish sense of humor, but he is serious when it comes to the reasons for opening his own brewery after so many years of championing contract brewing. “It’s about being in control of my destiny,” Cowan recently told the Jew and the Carrot. “I now have the opportunity to pay close, personal attention to the details, like the consistency of recipes and the exact science that goes in to making the same brew twice.”

Truth be told, it’s not Cowan who is “sweating like crazy, running up and down the tanks.” That is the job of his brewers, but Cowan is still very invovled. “I was an English major, so my ability to learn chemistry is limited at this point, but I’m good at drinking beer,” Cowan quipped. “I can say if it needs to be richer, more chocolate-y, more piney or more bitter.”

Cowan admits that opening his own brew house has been a big challenge. “I didn’t know all the questions to ask. There’s all this stuff like compressed air, steam, water, filters,” he said. “It’s not like ordering a new toaster on Amazon, where all you have to do is take it out of the box and plug it in.”

“It was never my intention to open my own brewery. There was no need so long as the quality and the supply of the beer were secure,” he explained. “But about two years there were problems getting enough beer, and I decided it was time.”

Cowan’s new facility has the capacity to brew 10,000 barrels, or 125,000 cases annually. He now also has the ability to introduce new and exciting flavors and to feature special yeasts. Having sold off the Coney Island Craft Lagers label, Shmaltz is focusing more on its HE’BREW beers.

This fall, there will be the limited-edition release of St. Lenny’s: The Immaculate Collaboration from Shmaltz and Missouri’s Cathedral Square Brewing Company. This will be a Belgian Style Double Rye India Pale Ale. A second collaboration, this one with Terrapin Beer Company, will result in Reunion ’13, a Dark Imperial Brown Ale brewed with cocoa nibs, vanilla, cinnamon and coffee.

As always, all HE’BREW beers are certified kosher. “The rabbi has been up to the brewery twice already,” said Cowan. The owner sent him home with some six-packs.

“He wanted free beer, just like the rest of us.”

Tours of the brewery and tastings in its on-site tasting room are available Wednesday-Friday 4-8 pm and weekends 12-6 pm.

He’Brew’s Finally Brewing Its Own Brews