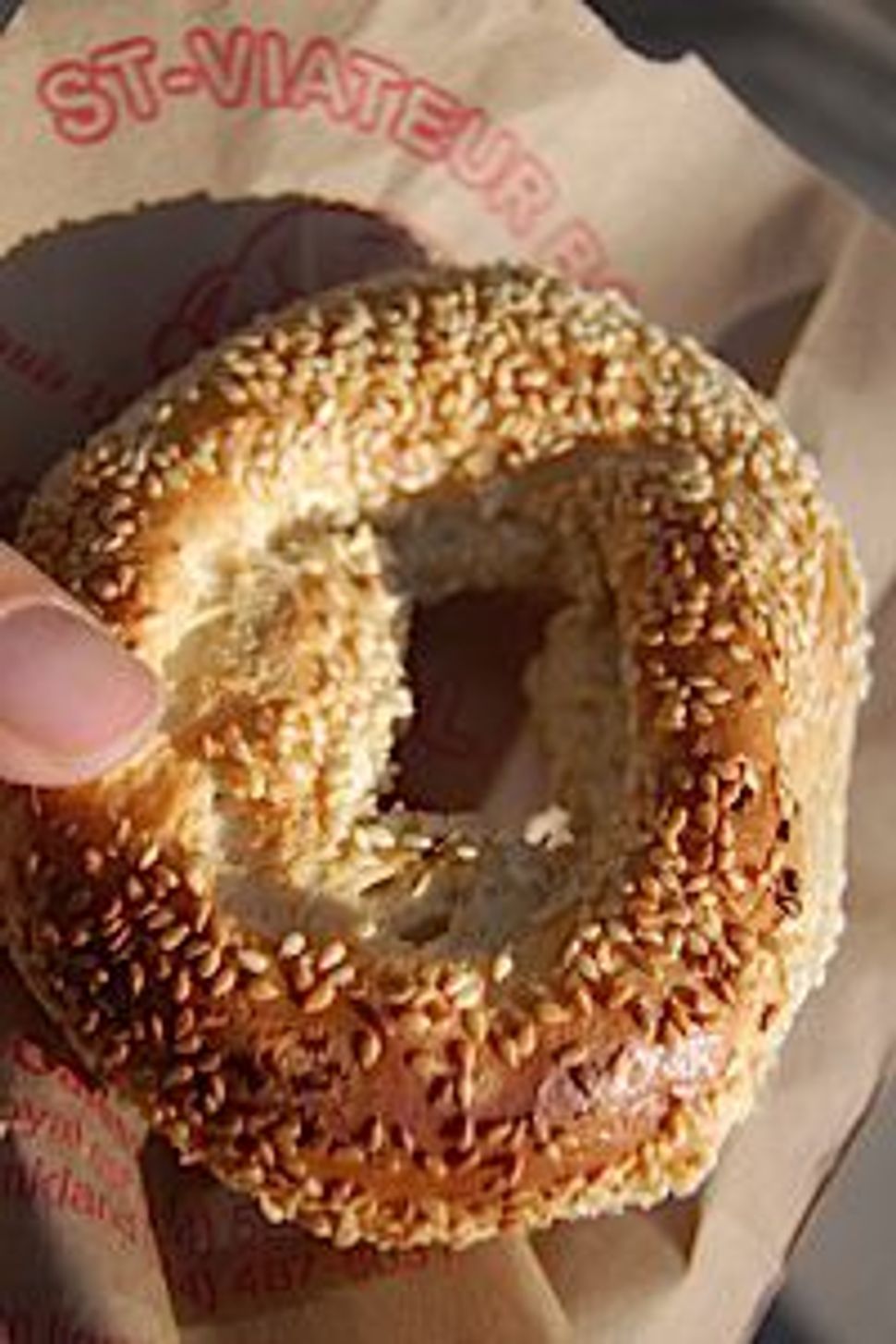 Under the Morena family, its owners since 1994, St-Viateur has ballooned to six retail outlets, a thriving wholesale operation, and a fast-growing delivery business to rabid bagel fans in the United States.

Now, St-Viateur’s taking its wares on the road – literally. The iconic bakery has launched its first food truck, and the only rolling kitchen in Montreal’s nascent food-truck scene dedicated to bagels. The sleek yellow van, emblazoned with the bakery’s familiar dancing-bagel logo, made its debut this summer, and this week unveiled a full schedule for Montreal’s downtown business district.

On the menu: A simple bagel & butter ($2.25CDN); classic bagel and cream cheese ($3.75); “The Traditional”, a bagel with smoked salmon, cream cheese, onion, tomatoes, capers, and lemon ($9) ; and perhaps the ultimate Montreal mash-up, a bagel with smoked meat and mustard ($9). An egg-bagel sandwich with bacon and cheddar cheese – definitely not an item from Myer Lewkowicz’s day – comes with filtered coffee for $7. Smoothies, coffee drinks, and fresh-squeezed orange juice round out the menu.

It’s hard to overstate the importance of St-Viateur in Montreal’s culinary and cultural landscape. Hand-rolled, boiled in honey-flavored water, and wood-fired, St-Viateur’s chewy old-fashioned bagels have become a staple for locals, and a huge draw for tourists; a rivalry between St-Viateur and neighbor Fairmount Bagel even got play on the BBC as “Montreal’s bagel war”. When Brooklyn uber-deli Mile End began importing Montreal bagels, owner Noah Bernamoff – a former Montrealer- chose St-Viateur, as the Forward has reported.

While a novelty for Canada’s second-largest city, bagel food trucks have been popping up around the world. Philadelphia’s new Schmear It made a splash last month with a bright-red truck dispending fourteen bagel varieties and customizable schmears like peanut butter and banana. RoundTheWay dispenses bagel burgers and sandwiches from a truck in Ballarat, Australia. And in Queretaro, Mexico, of all places, ME Bagel serves up “Bagels hechos Creaciones Unicas” (“unique creations made with bagels”).

Food trucks themselves are new to Montreal, where city law prohibited street-food vending for 66 years. A pilot project to relax the laws was proposed by then-Mayor Michael Applebaum, who later resigned under a cloud of corruption charges.

A 2012 study by San Francisco-based Emergent Research predicted massive growth in the number of food truck in the United States. It said food trucks could account for more than 3% of total restaurant sales — about $2.7-billion — by 2017, according to Canada’s National Post.