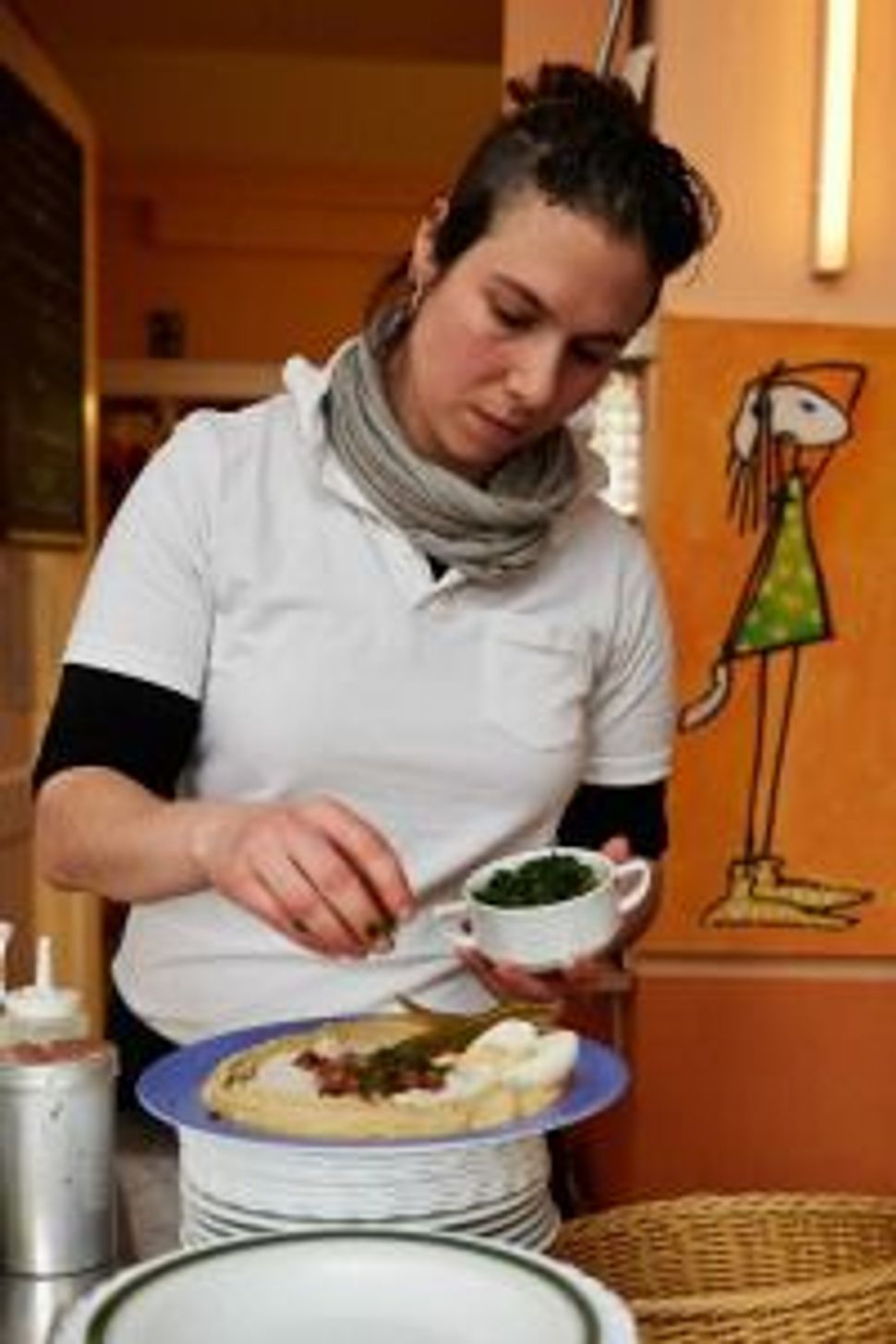 Image by Courtesy of Keren Shahar-Karbe

It could be just another store renovation in Berlin’s thriving Mitte-district. But Keren Shahar-Karbe is beaming as she walks through the empty rooms of a former art gallery. Some walls have holes and cables stick out of them. “So much has already changed,” Shahar-Karbe said, visibly excited.

In September, the 34-year-old Israeli started renovating the retail space with the two large windows and a door that opens to tree-lined Torstrasse, a street filled with cafés and shops. A few weeks from now, Shahar-Karbe, who currently runs the kosher catering service Keren’s Jewish Kitchen together with her husband, will be opening her own kosher Israeli café and bistro in this space. It aims to be a place for Berlin’s growing Israeli community as well as lovers of Israeli food and culture to connect and hang out.

The house belonged to a Jewish family until they were dispossessed by the Nazis. In the early ’90s, it was used as a squatter camp for anarchists. Now it is back in the possession of the original owners, who live in Israel. Shahar-Karbe plans to put up a plaque commemorating its history — right next to the library of Hebrew books and gallery of Jewish art for which she has dedicated the backroom.

Shahar-Karbe, a Jerusalem native, is a gastronomy veteran. “I did the whole circle around the kitchen work,” she says. She started working next to her studies during high school, and has since worked as a dishwasher, waitress, cook and baker. From early on, she would help her grandmothers in the kitchen, where she learnt to prepare typical dishes of the Mizrahi cuisine — some of which are still her favorites today: kibbeh (stuffed croquette), jachnun (rolled pastry) and bourekas (filled pastry).

It wasn’t until she moved to Berlin five years ago — “for pragmatic reasons”, she points out — that she turned her passion into full-time profession. “I tried all sorts of directions in my life,” said Shahar-Karbe, who also worked with children, as a mortgage consultant and in a bike shop, just to name a few. “But always the kitchen somehow came back,” she added. “And finally I had to say, well, that’s where I am.”

In Berlin, Shahar-Karbe, who never went to cooking school but acquired her skills by watching others, helping out and trying herself, started her own catering service together with her husband, who is also from Israel. They offer vegetarian, kosher cuisine. “When I keep the kashrut laws it elevates my work,” said Shahar-Karbe, a traditional and believing Jew. “I can dedicate it to the creator that gave me that abundance.” Cooking is also way for Shahar to remember her grandmothers and connect to her roots.

And there’s another way in which Shahar-Karbe combines spirit and food. Doing nothing else but cooking wasn’t enough for her. So she came up with an idea to organize regular Israeli Sunday brunches in Berlin, where she served food along with cultural activities, such as Klezmer concerts and book readings. It was their success and the highly diverse crowd she was able to draw — ranging from Israelis and Jewish expats to locals — that inspired her to dedicate an entire room in her new bistro to “cultural adventures”, as she calls them.

With her radiant smile, Shahar-Karbe, who has long black hair with a sidecut and wears a shiny vegan-leather coat, exudes confidence about her project: “I believe it’s a calculated risk,” she said. “I hope we know what we’re doing and we get help from the One that can help.” Surrounded by a diverse and relatively affluent neighborhood, which was traditionally Jewish – the Neue Synagoge is only two blocks away — and still features many Jewish businesses and a growing Israeli community of approximately 10,000 to 15,000 people to cater to, Shahar-Karbe’s adventure seems to be set for a good start.