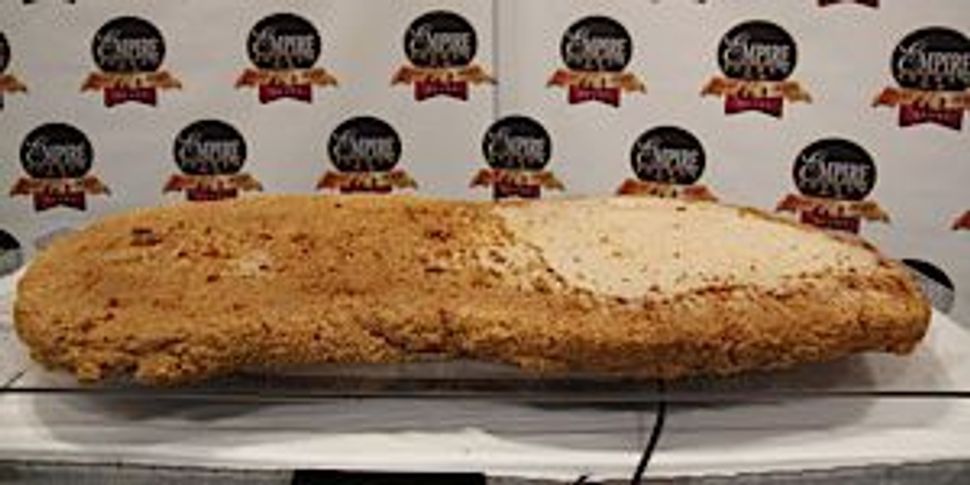 Not that any shellfish — jumbo or otherwise — will come anywhere near Empire’s record-setting nugget, which will be displayed at the Kosherfest trade show.

The 25th-annual, two-day kosher food expo kicks off in Secaucus, N.J., tomorrow and is expected to draw more than 6,000 people, all of them ready to nosh.

In addition to the 40-plus-pound nugget, Kosherfest will feature products from over 300 companies and more than 20 countries.

For the first — and perhaps last — time, the expo will also include a kosher supervisory agency run by a non-Orthodox rabbi. Rabbi Jason Miller’s Kosher Michigan certifies more than 50 businesses and is one of only a handful of non-Orthodox supervising agencies in North America. In an email interview, Menachem Lubinsky, Kosherfest’s founder and co-producer, said that Kosher Michigan is “the first non-Orthodox agency that has even attempted to exhibit at the show” and that it “fell between the cracks.”

“The sales people did not realize that Michigan Kosher was not an Orthodox agency,” he said. “The show is under the kosher supervision of the Association of Kashrus Organizations (AKO) and there will be signs posted throughout the show that AKO takes responsibility only for those booths that are either AKO members or offer products that meet AKO standards. He is clearly not a member and his products do not meet AKO standards. Show management will take steps to assure that only AKO approved exhibitors participate in the show in 2014.”

Interviewed by phone, Miller, who is based in suburban Detroit and certifies over 50 companies, most of them in the Midwest, emphasized that he had not hidden his Conservative identity; in fact, Kosher Michigan’s exhibitor blurb, which he said has been on the Kosherfest website for months, states in the first sentence that the agency was founded in 2008 by a Conservative rabbi.

“Certainly the ultra-Orthodox do not want to believe a non-Orthodox rabbi is able to run a successful kosher certification agency, but the facts on the ground are that that’s what’s happening,” he said. “The marketplace — the consumers — have the loudest voice in this industry so the market will dictate which certification agencies are authentic and which are not … My goal has always been to increase the number of kosher options without increasing the cost.”

He emphasized that he uses the same standards as Orthodox supervisors. “If you look in the Torah or Talmud, nothing says a certifying agent has to have Orthodox smicha,” he said.

While there may not be room for both Orthodox and Conservative at Kosherfest, the overall kosher industry itself seems boundless: According to Lubinsky, it’s a $12 billion market.