Behind the Scenes of ‘The Search for Israeli Cuisine’ 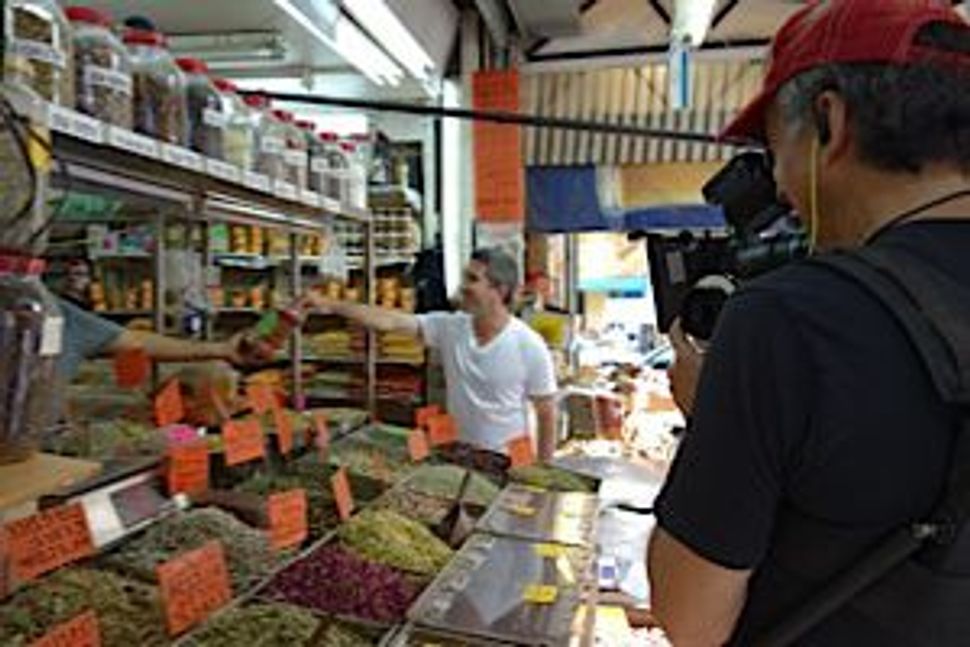 It was an overcast Monday afternoon in Tel Aviv’s beleaguered Hatikva neighborhood, and Chef Michael Solomonov was gamely accepting dish after dish at Bosi, a small-family owned restaurant, surrounded by cameras and sound men. Facing skewers of meat, a mounting stack of fresh flatbreads and a dozen salads including beet, several eggplant dishes, coleslaws and hummus, he rattled off descriptions for the camera. Using the salads to illustrate the Israeli melting pot, he attempted to name the origin of each one — one is probably Yemenite, another looks Palestinian — and turned around to feed a bite of kebab to his cameraman, documentary filmmaker Roger Sherman, who was towering over him.

Solomonov is partnered with Sherman, a two-time Academy Award nominee, to film an upcoming PBS documentary on Israeli food, “The Search for Israeli Cuisine.” They have traveled the country up and down, from Metullah to Mitzpeh Ramon, in search of what Solomonov termed “grassroots” food experiences. Along the way, they visited vintners, farmers, cheesemakers. Solomonov also stopped in the homes of talented cooks and attended a poyke dinner after dark in the desert. The list of sites was pulled together by Solomonov, Sherman. producer Karen Shakerdge, who is half Israeli, and Avichai Tsabari, a local tour guide and sommelier. All in all, the trip was the result of one and a half years’ worth of planning and fundraising to date, to be packaged into four half-hour episodes scheduled to air next year.

“Everybody’s passion is what made this a special project, that meeting of the minds,” said Shakerdge.

After all that eating day in and day out, it was amazing that each experience was unique, commented Solomonov while standing before the spread of food large enough to feed a medium-sized camera crew. Yet after eating all day, no one was hungry.

The restaurant was nearly empty, and the bakery next door also had no customers at that hour. Passersby, out for a walk between the intermittent downpours, stopped to stare at the camera crew.

“What are they filming?” asked a boy to no one in particular. “They’ve come to Hatikva, but I just want to leave,” commented one middle-aged neighborhood resident.

The team had finished shooting more quickly than they planned, so they headed into the Hatikva Market. Hatikva is the lesser known of Tel Aviv’s two produce markets, attracting far fewer tourists than the popular Carmel Market. As darkness fell, the camera crew shot panoramas of the market as well as close-ups of produce such as miniature eggplants, and then jetted off to a well-known neighborhood joint selling sabich – fried eggplant in pita – in the Tel Aviv suburb of Givatayim.

Filming has been great, but eating so many meals a day for the camera is exhausting, commented Solomonov, who griped that he’s been gaining weight in the process. Soon, it’ll be back to Philly and to the daily routine.

Behind the Scenes of ‘The Search for Israeli Cuisine’