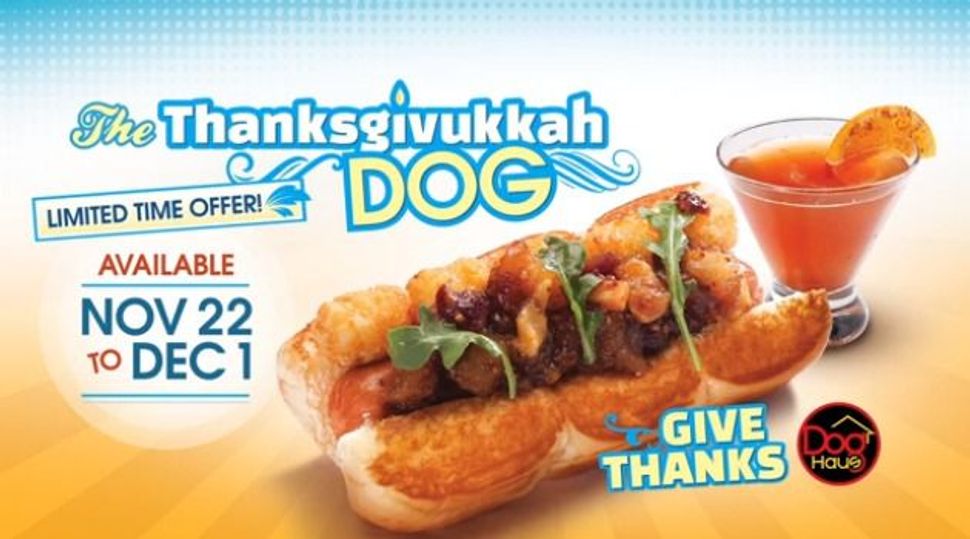 A once in a lifetime holiday that combines two of the most tasty holidays is a really serious event. Latkes, presents, lighting the menorah, making stuffing, and a turkey on the same night? Talk about a lot of pressure. We’d totally understand if you’re just not feeling up for making pumpkin sufganiyot. And we think you’ll family will understand too once they see some of your other options.

Restaurants aren’t taking Thanksgivukkah lightly. They’re bringing out the big guns in the form of challah stuffing, burnt marshmallow challah donuts, sweet potato latkes, and more. With delectable options like these, it’s a shame we won’t see them again for 79,000 years.

The Doghaus is serving a special “Thanksgivukkah dog,” a smoked turkey sausage mixed with bits of whiskey-soaked cranberries and brown sugar sweet potatoes, then topped with tater tots, which represent latkes, and drizzled in apple-raspberry compote.

Kutsher’s Tribeca has a slew of Thanksgivukkah options on their prix fixe menu that include pumpkin shlishkas (complete with Amaretto Matzo), a choice of turkey or brisket, and family style sides like challah chestnut stuffing and cheesy spaetzle kugel. Cranberry-raspberry sufganiyot with chocolate gelt sauce end the evening on a sweet note.

Zaftig’s Delicatessen is offering a catering menu to host a delicious Thanksgivukkah feast at home. Matzo balls are offered alongside butternut squash soup, sweet potato pancakes are an option as well as regular potato pancakes, and of course a whole turkey is available starting at $45.

The General Muir has two pre-set menus ($450 for ten servings)– one for Thanksgiving and one for Hannukah. They’re identical except for dessert: an apple spice cake for Thanksgiving, olive oil lemon cake and blue & white cookies for Hannukah. Other courses include duck sausage, fennel, and apple stuffing, and whipped sweet potatoes with pecans and brown butter.

Mile End, NY
Mile End will be hosting a special dinner on the first night of Hanukkah ($45 per person, reservations can be made by calling 212-529-2990) that includes some Thanksgiving flare: sweet potato latkes with turkey rillettes and cranberry, and Brussels sprouts with pear, poppy seed, and chevre noir. Red wine braised brisket, sunchoke kugel, concord grape sufganiyot will round out the meal. A special catering menu will also be available Nov. 27-December 5 so you can order goodies for any night of Hannukah. Mile End will also be serving Hanukkah specials throughout the eight days.

The Organic Grill will be serving a vegetarian four-course prix fixe menu ($29.99 PP, call (212) 477 7177 for reservations) with leek and fennel latkes, sweet potato souffle, and entree options like maple baked seitan with gluten free cornbread stuffing and lentil and mushroom shepherd’s pie. Warm up after you eat with a pumpkin latte.

The Red Door will be hosting a family-style feast ($35 pp) that includes brussels sprouts with lamb bacon, pumpkin brioche stuffing, latkes, and brisket.

Throughout Hanukkah, DGS is serving their Thanksgiving inspired latkes, which include a carrot cumin variety and a golden beet-horseradish one. They’ll also give the option of ordering a sweet potato latke topped with roasted turkey, gravy, and cranberry sauce. DGS’s dessert options will include nutella and grape sufganiyot.