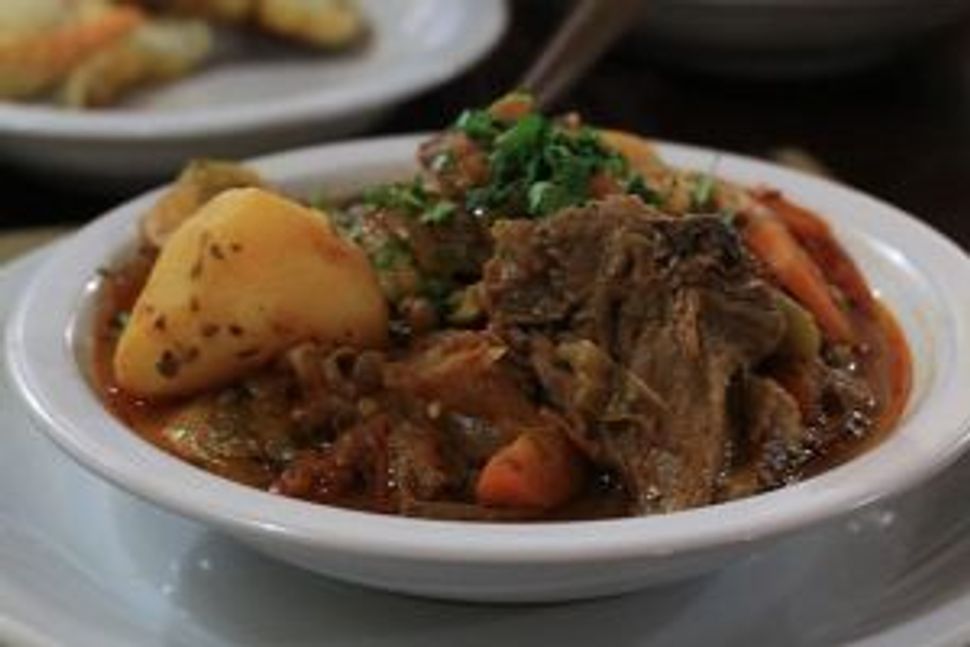 My family gets together regularly with a group of dedicated carnivore friends for a feast including some combination of roast beef, schnitzel, sausages, and sometimes a roast goose. My contributions tend toward accessories like wine, vegetables and desserts, important but less glamorous. So I was excited when friends at the Isabella Freedman Jewish Retreat Center recently offered me a quarter of a sustainably raised and humanely slaughtered goat: rib cage and a foreleg, in two large, bony pieces – a new food for me, and an adventure in ambitious meat eating.

Friends who had acquired goat quarters in earlier years had told me heroic tales of three-hour struggles to butcher and bone their prizes. This was out of the question for me. I didn’t mind long periods of unattended marinating or baking, but I couldn’t commit that much active time to a single one of the many tasty things I was going to serve that shabbat. But that struggle also seemed completely unnecessary. I own an awesome meat cleaver and I know how to use it. But I also knew that my oven would make even the toughest meat come off those bones all on its own – and put the goodness of the bones into my finished dish at the same time. So from the first I planned an on-the-bone oven braise.

The two categories of goat recipes I found online were Caribbean-inspired stews (hot peppers and coconut) and Indian-inspired stews (hot peppers and yogurt). Everybody seemed to agree that the meat was strong-enough flavored to want spice, and tough enough in texture to want both tomato or other tenderizing acids, and long, slow heat. Yogurt was out in my kosher kitchen. But coconut would be tasty, and go nicely with the tenderizing qualities of ginger and cider vinegar.

So my recipe took shape. On Wednesday night before bed, I pureed generous quantities of garlic and ginger in the blender with a little coconut milk, oil, and a splash of cider vinegar, and rubbed the resulting mush all over my goat, which went into a giant ziploc bag to marinate peacefully in the refrigerator.

Thursday night, I combined the rest of the coconut milk, some chopped tomato and leek, and an assortment of ‘warm’ spices in a bowl. I piled the goat pieces with their marinade into my big turkey-roasting pan, poured the rest of the sauce over and mixed it around, covered the whole thing tightly with foil, and tucked it into a low oven overnight – around 8 hours baking time, but no need for precision.

Friday morning I took my pan out of the oven and put it aside to cool. By the time I returned, the coconut milk had picked up all the other fats in the dish and solidified on top, where it was easy to lift off with a spoon and discard. Then I picked up each section of bone and used my fingers to pick off the chunks of completely tender, deep brown meat, which I set aside in a storage bowl. I discarded the bones and occasional odd unappealing bits, and poured the remaining picked-over sauce over the bowl of meat – a rich, spicy (but not super-hot), very delicious stew to reheat and serve over rice on Shabbat.

Next time I will reduce the proportion of tomato to meat a little – mine was even saucier than I hoped. But for a total of about 45 minutes active work-time, my first goat turned out easy, sustainable, and delicious.

1) In a blender, puree garlic, ginger, vinegar, oil, and a quarter of the coconut milk (plus salt if your kosher goat isn’t already salty enough). Pour over goat and use hands to spread all over until well coated. Enclose in a 2-gallon zipper bag, so that marinade touches meat all over (or pile into roasting pan and cover tightly) and refrigerate 24 hours.

2) Next evening, put goat and its marinade in a roasting pan. In a bowl, combine the rest of the coconut milk with all the other ingredients and mix well; pour over goat in pan, and distribute the sauce so that all meat and bones are coated.

4) In the morning, remove pan from oven. Set aside to cool to room temperature, at least 2 hours.

5) When pan is completely cooled, uncover and lift off solidified fat with a spoon and discard. Lift bones out of sauce and use fingers to remove the tender meat; discard bones and any tendons or other nasty-looking bits and put meat into a storage bowl. Pour picked-over sauce over the picked-over meat and refrigerate.

6) Before serving, reheat covered in low oven; serve over rice or noodles or with a lot of bread.

Elisheva Urbas is the director of Makom Hadash, Hazon’s non-profits community in New York City, and a freelance editor, with 25 years of working in and around New York publishing. She lives with her husband and their three teenaged daughters, all of whom are good hands to have in a kitchen.