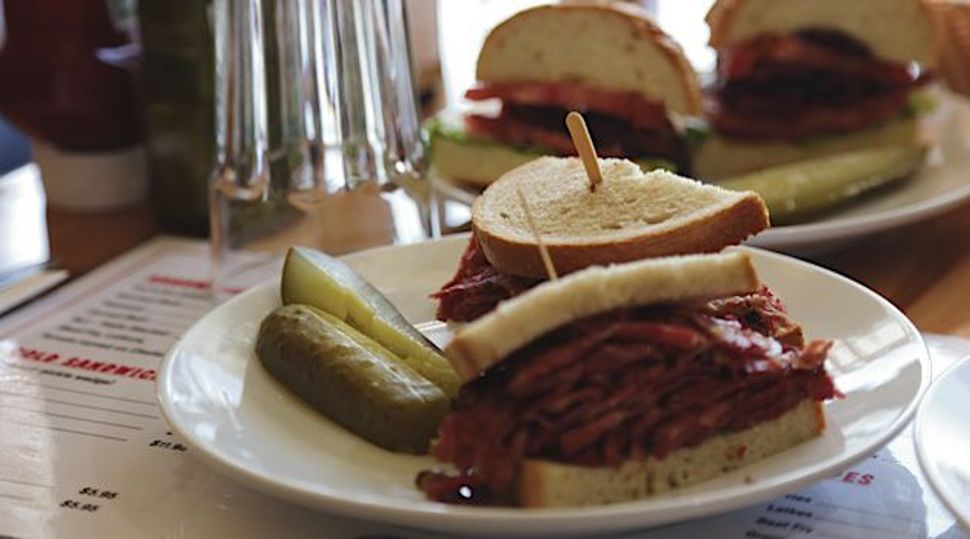 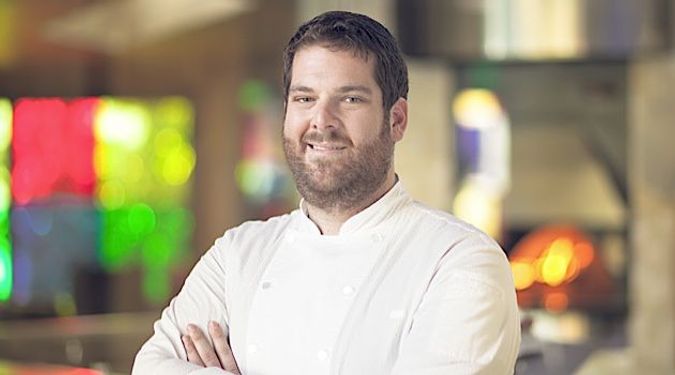 Outside the kitchen, Micah Wexler is friendly, funny and never without a 5 o’clock shadow. He’s the Seth Rogen of chefs — the kind of guy you wish you could grab a beer with. But in the kitchen he’s all business. Music during dinner prep? That’s fine. But come dinner service, it’s time for him and his staff to be quiet, put down their heads and cook.

Wexler, 31, made his culinary name as one of the few chefs in the country to specialize in upscale Israeli fare. Dishes like flatbread topped with cauliflower, feta, olives and golden raisins, and pink snapper served with fava beans, sugar snap peas and Persian mint, won his Los Angeles-based restaurant, Mezze, praise from Food &Wine, Los Angeles magazine and diners.

This spring, Wexler will trade in his tahini, za’atar and flatbread for spicy brown mustard, marbled rye, pastrami and a 10-seat counter called Wexler’s Deli, in L.A.’s Grand Central Market.

When Grand Central Market first opened, in 1917, it was a hub for the city’s residents: Home to fish and cheesemongers, fruit and vegetable vendors, flower shops and soda fountains, it captured the essence of early 20th-century shopping and eating in L.A. Nearly a century later, the 30,000-square-foot outdoor arcade is in the midst of a renaissance, with a wood-fired pizzeria, a Thai street-food stall and, this March, Wexler’s nouveau delicatessen.

Home to several iconic, old-school delicatessens, most notably Langer’s and Canter’s, L.A. hasn’t exactly caught up with the deli revolution that is currently playing out in other cities. Wexler plans to change that.

An L.A. native, he grew up eating at Langer’s and developed a lifelong craving for cured meats and pickles. “There was this whole routine with the same waitress every time, the same comfort foods and this sense of greatness to the deli,” Wexler said. “I did not realize it as a kid, but growing up around this food really shaped me.” So did his grandmothers’ cooking, a degree from Cornell University’s School of Hotel Administration, and a string of jobs in high-profile kitchens across Europe and America. 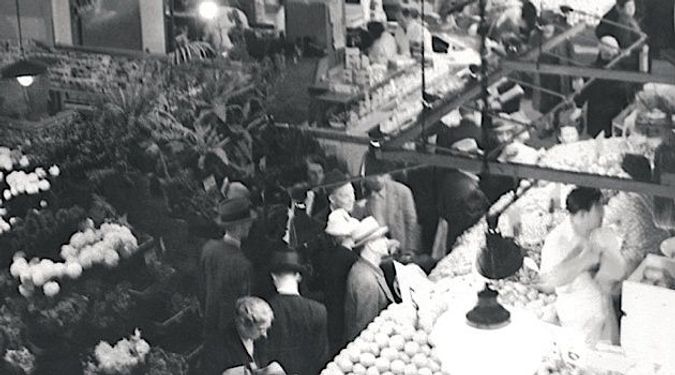 In his late 20s, Wexler opened Mezze in Central L.A. Despite the restaurant’s decidedly Middle Eastern focus, Wexler’s affinity for Ashkenazi food popped up occasionally on the menu — in a cocktail made from gin, pickle juice and mustard seed, or on Sunday nights, when the restaurant featured deli standards like knishes and matzo ball soup. Sadly, Mezze shut its doors in 2012 after only a year in businesses, following a battle with a neighboring construction site.

Not long after this, the owners at Grand Central Market approached Wexler about opening a deli. He accepted, eager to change his focus and to cook Ashkenazi fare. “When you have a restaurant as specific as Mezze, people start to look at you and think, ‘Oh, that’s the dude who does modern Middle Eastern,’” he said. “But that is just not where I am at right now.”

Where he is, is deep in the pastrami zone. “Early on, my thought process was, ‘How can I geek out on this food for six months until I get it right?’” Like any good Jewish day school graduate, he started with the texts. Wikipedia, websites, cookbooks, history books — all were fair game as he sorted through the slush pile of cured meat lore. “I kind of fell down the rabbit hole as I read through everything and tried to pick out the best pieces of each one,” he said.

He emerged on the other side with a recipe that turned out to be triumphant beyond his expectations. “It was one of those rare occasions in the kitchen when you try something the very first time and say, “Wow, this is perfect.’”

Like the other nouveau delis that have opened in recent years, he is obsessively focused on quality. His restaurant will turn out pastrami, corned beef, dry-brined Scottish lox and sturgeon, all cured and smoked within the 350-square foot space of his new deli. For bread, he is partnering with a local artisanal purveyor, Etxea Bakery, to develop bagels and rye that are, as Wexler described it, “crusty on the outside and spongy inside, just like in my taste memory.”

Unlike some of his contemporaries, however, Wexler’s menu will focus on tradition rather than interpretation. “Our space is tiny, so the menu can’t be all things at once,” he said. “You are not going to find smoked tofu pastrami or duck matzo ball soup.”

You also will not find the gargantuan, toppling sandwiches made popular at old-school delicatessens. “Good cooking is a game of ratios, particularly with sandwiches,” he said. “If you are at one of those delis and your first instinct is to remove half of the meat, then something is wrong.” He plans to serve a short list of core sandwiches made with unctuous, hand-sliced meat, along with a rotating weekly special like latkes or chopped liver.

Eventually he hopes to open up a larger version of the shop, with a more expansive menu. But when it comes to the deli, he believes that customers ultimately crave the same comfort and familiarity that he does. “There is something about pastrami here in Los Angeles. You see all walks of life at the delicatessen because people know and love it,” he said. “We want our food to speak to them.”