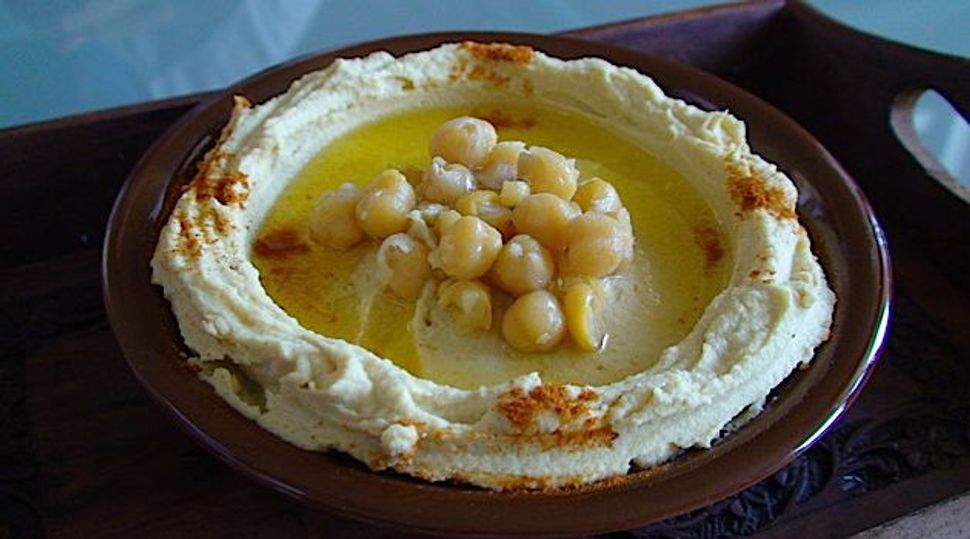 It’s a sunny January day in West Hollywood, Calif., and I’m breaking pita with Australian filmmaker Trevor Graham at the Lebanese restaurant Pi on Sunset, over a table laden with Middle Eastern classics: Falafel crunchy on the outside, soft in the middle; grape leaves stuffed with rice, tomatoes and parsley; labneh with Kaffir cheese, garlic and mint; and tabouleh. Being an Aussie, Graham washes down the Mediterranean meal down with a bottle of beer, and with a flourish he swirls a slice of pita into the just-made hummus and devours it. “The thing with hummus,” he says, “is that really you’re meant to do it all together, everyone at the same table, from the same bowl.” Hummus eating is a communal experience, muses Graham, who has come to town for the West Coast premiere of his documentary, “Make Hummus Not War,” at the Santa Barbara International Film Festival.

For two and a half months, Graham filmed his globetrotting quest from Sydney to Israel, Lebanon to New York and beyond, to discover where the best hummus is served and where it really comes from.

Not surprisingly, like much else in the Middle East there’s a difference in opinion as to where the repast of mashed chickpeas was created. In the movie, Dr. Hanan Ashrawi, a representative of the Palestine Liberation Organization, insists that the Palestinians invented hummus, while Lebanon’s minister of tourism, Fadi Abboud, claims the Lebanese did. Israeli novelist Meir Shalev asserts that there’s a passage in the Old Testament that definitively proves Hebrews invented the dip.

‘Love, sex and hummus go together like hand and glove.’

Graham’s documentary is leavened with wit, as he cleverly intercuts the talking heads with some Monty Python-esque animation. The film opens with a graphic of a scroll bearing a quote from Matthew 5:9: “Blessed are the peacemakers, for they shall be the children of God.” An animated hand wielding a quill crosses out “peace,” replacing it with the word “hummus.” There are some good-natured jokes about “hummus-sexuals,” and American comedian Elon Gold makes wisecracks about confused Gazans mistakenly voting for Hamas because they thought the terrorist organization was actually — you guessed it — hummus (a joke that wasn’t lost on Sacha Baron Cohen’s character Bruno).

Graham made his name in filmmaking by working on projects about Polynesian women, Yiddish writers unions and land rights activists. So what’s a nice Anglo Australian boy from Melbourne doing directing a documentary about hummus? When I asked, Graham said, “Love, sex and hummus go together like hand and glove.” When he was 16 he fell in love with a Jewish girl “We used to buy hummus, pita bread with falafel, at a place in Melbourne called Lebanese House. That’s where my very intimate connection between hummus, making love, Jewish girls, all came together, literally,” Graham confessed.

But the roots of his hummus love, Graham said, go back to his father: “He served in what was then the British Mandate of Palestine during the Second World War. I grew up on stories about the wonderful food he ate in Jerusalem, the Old City…. Those things were part of my DNA growing up in Melbourne, even though I came from a very Anglo family and at home we were into roast beef and overcooked carrots, peas and potatoes.”

Today, hummus is an integral part of Graham’s home life. He and his wife, Rose, make it often, using their special recipe: “We use lots of freshly ground black pepper, so it’s spicy and hot, a little bit like Sephardic tradition….It’s very, very difficult to make by hand to get an incredibly smooth paste. At home I put it in a blender” with his secret ingredient: pomegranate concentrate. “It’s very, very sticky; just use a little bit of it. It adds to the tartness.”

The chickpea connoisseur’s preferred hummus is Lebanese, because of “the flavor. Israelis like to have more tahini in their hummus; the Palestinians tend to like it more lemony. So it’s about the balance…. In Lebanon you get lots of topping on your hummus — barbecued beef, lamb, fish and sometimes vegetables — which makes it very flavorsome. In Beirut I had 10 different types of toppings; it’s very experimental how the Lebanese use hummus as a base.”

Still, each group claims to have invented the dip. In the documentary there’s a filmic food fight as Palestinians, Lebanese and Israelis all claim they invented and make the best hummus, while competing for their share of the growing $400 million export market of the United States. Graham visits a Massachusetts factory where, in contrast to the modest eateries he visited in the Middle East, hummus is mass manufactured in vast vats. And, putting on his Woodward and Bernstein yarmulke, Graham exposes the fact that Lebanon’s minister, Abboud, is himself locally making and marketing hummus, which he seeks to export. Graham never quite gets to the bottom of the mystery of which people “own” hummus.

More important in the Hummus Gospel according to Graham is, “Hummus has the recipe for peace.” The filmmaker waxed poetic: “Eating hummus is very much a social thing, sharing the same plate. That’s why it’s such a metaphor for bringing all the different sides of the Middle East conflict together.”

The World’s Best Bowls of Hummus