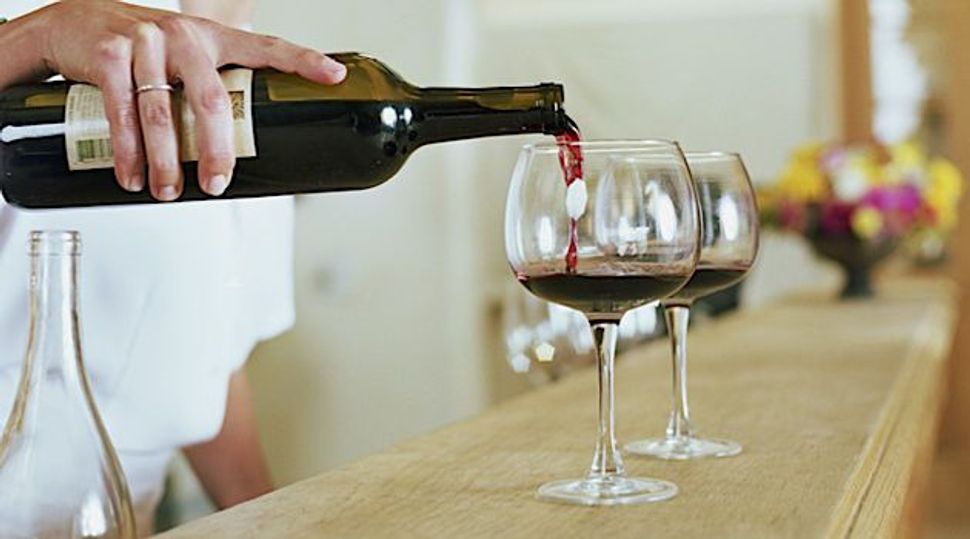 I wondered, as I crossed the stone-flagged patio of the International Convention Center in Jerusalem, if it was worth visiting the Second Wine Jerusalem Festival. I’d made the rounds of the larger Sommelier wine exhibition in Tel Aviv just a few weeks earlier. There probably won’t be much new to see or taste, I thought.

I was wrong. True, there were fewer stands at the Wine Jerusalem event. But, as a kosher-keeper, it was nice to know that I could drink whatever I liked here. I could taste confidently at every stand; a change from the hard stares and snobbish answers I’ve gotten at some non-kosher displays at other wine tastings. The crowd was a fair mix of secular and observant people, with a noticeable number of women swirling wine, inhaling the bouquet, and thoughtfully swallowing, like me. I felt comfortable.

Some wineries represented began without kosher supervision but changed over in the past few years. For example, the Tulip Winery became kosher in 2011. The secular owner admits to a certain frustration in not being able to handle his own wines, but also said that their sales have doubled since going kosher. The religious crowd has gotten hip to quality wines. And they don’t buy just one bottle each time; they buy a lot. Standing at the cashier’s desk with my modest two bottles, I watched a young haredi man load three boxes into his shopping cart. He was talking loudly into his phone at the same time, and saying, “Mom, I just spent a lot of money. OK? I’m bringing a lot of wine home.”

I wish I could have, too.

Adir Winery: A. wine from the Kerem Ben Zimra vineyard is 60% shiraz, 35% cabernet sauvignon and 5% cabernet franc. The grapes for A were gently pressed, not crushed, to obtain a fresher tasting wine. It has herbal, vanilla and tobacco notes, feels silky going down, with a medium body and long finish. Enjoy it with mild cheeses, garlicky roast chicken and barbequed foods.

Tura Winery: Mountain Peak wine is a blend of 56% cabernet sauvignon, 32% merlot, 7% cabernet franc and 5% petit verdot. A full-bodied wine with notes of black pepper, berries, plums and cacao. Serve it with strong-flavored cheeses, steak and pastas with tomato sauce. All Tura wines are aged at least 20 months in new French oak barrels, and two years in the bottle. Tura also grows organic apples for their very good alcoholic cider, which, like the wines, is kosher for Passover.

Golan Heights Winery: 2T is a blend of Touriga Nacional and Tinta Cão grapes, aged 18 months in French oak barrels. You taste black plums, cherries, and a subtle floral note. It has a most pleasant, lingering finish. It’s unusual for an Israeli wine, due to the blend of traditional Portuguese grape varieties that in Israel, only the Golan Heights winery grows. Serve with duck, beef, and hearty poultry dishes like roast turkey.

I’m not a fan of dessert wines, but Golan Heights Yarden Muscat made a deliciously sweet impression. It’s fortified with oak-aged brandy, but the sweetness comes naturally from the grapes, not added sugar. This makes it light and sweet enough to accompany dessert, without danger of becoming cloying. It aged 24 months in the barrel and has 18% abv. Serve it with fruit pies and cheesecake, and chocolate mousse if you enjoy a sugar rush.

Odem Mountain Winery: Alfasi 2008 This is the winery’s only blend (cabernet sauvignon and merlot). It’s an elegant, dominant wine, with new flavors opening up every half-second, among which are minerals, forest berries and black plums. Enjoy the long, strong finish. Serve with strong cheeses, beef, and lamb.

Tulip Winery: White Franc. This is one of my favorite white wines. With its unusual bronze color and light tingle, it’s a refreshing, summery wine with notes of citrus flowers and red apples. Great for an aperitif or to take on picnics. However, the Black Tulip is probably the best wine that I tasted at the event. Black Tulip, the flagship wine, is a blend of 60% cabernet sauvignon, 20% merlot, 13% cabernet franc, and 7% petit verdot. Rich and complex, with strong fruit notes and a little lingering off-sweetness, like roses, in the finish. Black Tulip can easily accompany beef stews and rich pastas, fruit-studded lamb dishes, and good-quality sausages in sauce.

Arakino. This was an amusing surprise, a bottled blend of arak mixed with soda water and individually flavored with lime, pineapple, grapefruit or moscato grapes. Stopped with a champagne cork and sealed with foil, Arakino is pop arak, or maybe, the poor man’s champagne. The stand attracted men who seemed to be less interested in tasting wine than getting a quick fix. Perhaps the brochure, which boasts 18.5% alcohol, lured them to the stand. Arakino has no Web site, but can be ordered locally at 08-8531542.

All the above-mentioned wineries have distributors in the U.S. Check their websites for details.