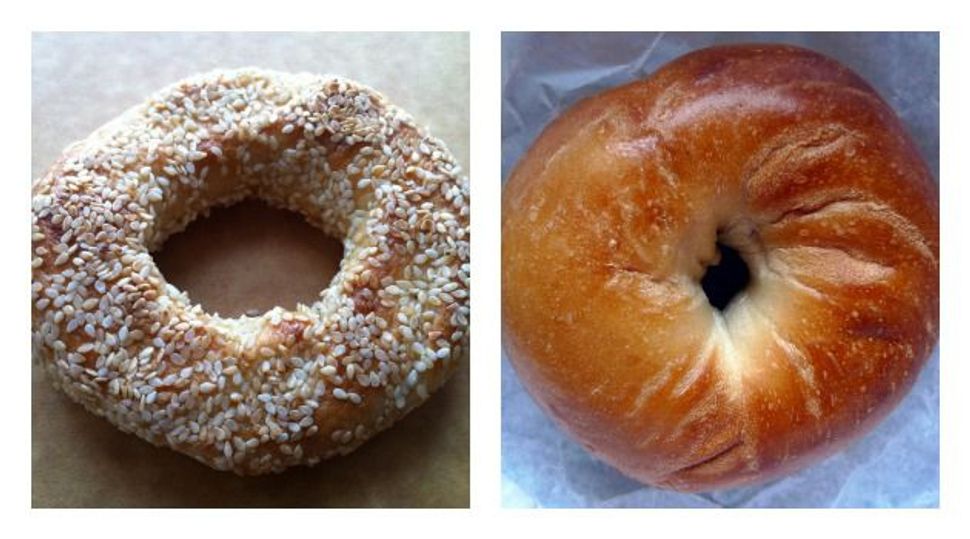 Montreal and New York bagels have long been in a standoff. Will Black Seed, a new bagelry that plans to combine the two recipes end the feud? Photos courtesy of Mile End and Flickr

When Mile End opened in Brooklyn four years ago, the Montreal-inspired deli made a name for itself by trucking bagels weekly direct from the mothership — the hallowed St. Viateur Bagel in the eatery’s namesake neighborhood.

Black Seed’s opening is part of a wave of sit-down bagel and appetizing shops coming to Manhattan and Brooklyn this spring. Lower East Side mainstay Russ & Daughters is expected to open a full-service café shortly, and seating at a new location of Brooklyn smoked-fish emporium Shelsky’s is slated to debut after Passover.

“We’re not trying to reinvent the wheel,” Bernamoff told the Forward. “It’s been reinvented a few too many times in the wrong direction. We’re trying to take it in reverse, to a more essential place. It’s not about introducing new and groundbreaking concepts into the canon of bagel-making. It’s just about trying to bake an amazing bagel.”

Black Seed’s bagels may surprise fans of Mile End, which has built a rabid following by rebooting Montreal classics like smoked-meat sandwiches and poutine. While boiling bagels in honey and baking them in a wood-burning oven a la Montreal, Black Seed will unveil a hybrid that draws on both Montreal and New York bagels.

“Boiling our bagels in honey will add that real hint of sweetness I really like. But I also like the saltiness of New York bagels, so ours will have both. The wood-fired oven will also add the uneven finish that I love about Montreal bagels,” Bernamoff said.

He and Kliegman are still experimenting with dough, though the final product will also be “glutinous, like the dough in New York bagels. A lot of New York bagels get very soft, and we’ll have that’s an element. And I love the snap of a NY bagel on exterior.”

Why not go with straight-up Montreal bagels, which routinely sold out when Mile End imported them? “We think that might be polarizing,” Bernamoff said. “There’s a love for Montreal bagels, but it’s not universal. New Yorkers understand it as a bagel that’s different from a New York bagel. But outside New York, Montreal bagels might as well be some Szechuan dish that no one’s familiar with.”

Black Seed will also offer “more aggressive seeding” than bagel-lovers are used to seeing at Gotham’s bagelries. “I’m always dismayed when you order a New York bagel and there’s, like, 12 sesame seeds on it,” Bernamoff said. “Montreal bagels are covered in sesame seeds. That element is something we plan to introduce with our bagels.”

House-made cream cheeses and salads will round out the menu at the 11-seat Black Seed. “It’s very classic stuff. Our homemade cream cheese will be used as base for a limited variety of flavored cream cheeses. Not chipotle and chocolate chip, but scallion, horseradish, dill,” Bernamoff said. “And we’ll have fish spreads that are cream-cheese based, like smoked bluefish, smoked mackerel, and belly lox. There’ll also be sliced fish like smoked salmon, sable, and sturgeon.” Bagels will be baked on-site in a wood-burning oven built in, and shipped from, Seattle.

Ultimately, said Bernamoff, he and Kliegman hope to expand Black Seed across New York, and possibly further. “There are much better prospects for expansion than Mile End,” he said. “This might be the thing that sends my kids to summer camp.” Black Seed is expected to open at the end of March at 170 Elizabeth Street in Nolita.