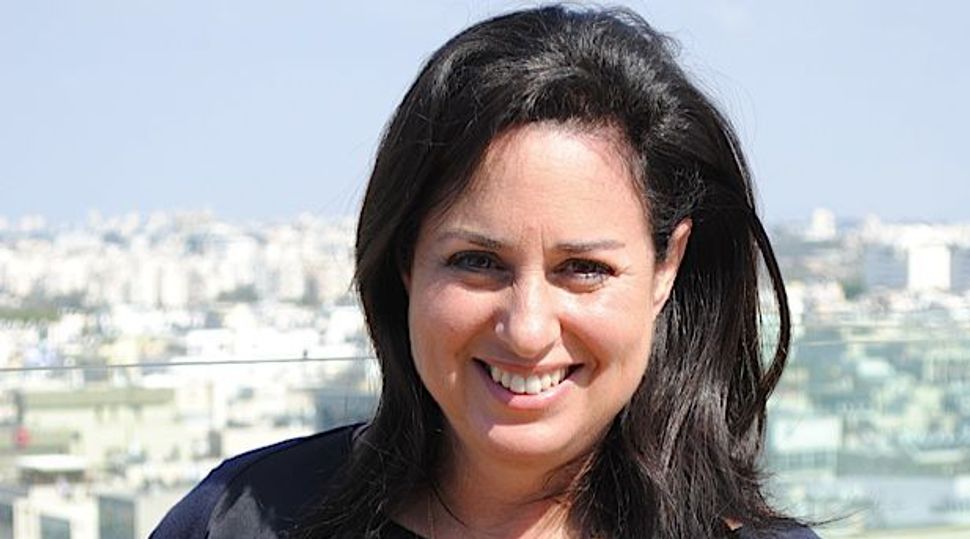 If you have a lot of money and time to spend in the holy land, you would be lucky to find yourself on one of kosher cookbook author Susie Fishbein’s tours. She recently led a group of 34 from the Negev to Sfat to Tel Aviv — with stops at the artisanal Lachma Baker, a chocolate workshop, the Carmel winery and a Yemenite garden meal in a grove with 120 exotic trees — all while offering cooking demos on a moving bus.

I caught up with her group early in the tour, at the Carlton Hotel in Tel Aviv. The ladies (only four men tagged along) were learning how to stuff ravioli at the hotel’s restaurant, Blue Sky. The hotel sous-chefs had prepared the pasta and rolled it out in advance, so that all the participants needed to do was cut out pasta circles, squeeze a prepared filling of ricotta and spinach over them, then top them with other pasta circles. The ravioli found their way to the lunch table. It reminded me a bit of the challah my daughters used to bring home from school, where the teacher had prepared the dough and the girls only braided and egg-washed the little loaves.

Still, Fishbein said that the trip was transformative for her, introducing her to the flavors of modern Israeli cuisine, which she hopes to incorporate into her upcoming work. When I caught up with her a week later she was just unloading groceries for her next cooking show. “I’m demonstrating butternut squash farrotto, beet soup with pumpernickel croutons, and pistachio-crusted salmon over smashed sweet potatoes with a vanilla-rum butter sauce.”

The menu was radically different from her previous style of cooking — a sort of semi homemade take on Jewish food — lots of sweet ingredients and puff pastry. Now she says, her kosher readers are catching up to a broader healthier trend.

She chatted with me about her best meal in Israel, culinary innovations in the cuisine and a spa that I’d kill to be at right now.

Did you notice any culinary innovations this time in Israel, compared to previous visits?

Without a question, both in technique and presentation. You can clearly see the influences of chefs who studied abroad, but then came home with their Israeli sensibilities – their ethnic interpretations. There’s a European feel, but definitely an Israeli pride about things like techinah, silan, and eggplants, with modern twists.

What impressed you most on your tour?

The food at the spas was of a caliber I never would have imagined. What the chefs are doing with layering sauces and flavors, colors and textures on a plate – it impressed and surprised me. There’s nothing like those kosher spas in America, so it was the first time I’d experienced it first-hand. Those kosher kitchens rivaled what I’ve seen in non-kosher restaurant kitchens. Kosher cooking is really cutting-edge in Israel.

Did you find a common thread running through the new Israeli cuisine?

Yes, always this way of eating healthy, interesting, layered food, and being aware of how the plate is going to end up looking.

Do you think your readership is ready to adopt the Israeli way of eating?

We were in the hands of 5-star chefs all along the tour, and what’s served in restaurants isn’t what people cook at home. When you go to a restaurant and order something recognizable, it’s always different from how it tastes when you cook it yourself. Today there are unbelievable kosher restaurants raising the bar. That reverberates down to the home, and raises the bar of what kosher people are aiming for in their kitchens. Still, nobody is going to go home and make five different sauces for gnocchi, like we had at the Carmel Spa.

What culinary experiences in Israel did you not have, that you wish you could have fitted in?

I’d like to experience cooking in a Druze kitchen, and a halva workshop, and one where we make falafel. I wish we could have made it to the fish market, early one morning. There are lots of new boutique breweries in Israel – I’d like to visit some next time.

Are you planning a book about your Israeli tour?

No, I don’t see a book coming out of that one trip. So many of the dishes – even the vegetarian – are very time-consuming and fussy. My audience wants that look and taste, but they’re just not going to spend three hours over a pot of simmering tomatoes. As much as I feel enriched from my travels, I don’t have book material for my particular audience from them.

What was your favorite part of the week spent eating in Israel?

It was a sensational week. I don’t know if I can single out any one experience, but being at the Bereishit Spa at the Ramon Crater was unique. The place has an atmosphere like no other. Another really special event was the Yemenite lunch and botanical walk at the Bachatzer shel Orah (on Moshav Maimon, northern Negev).