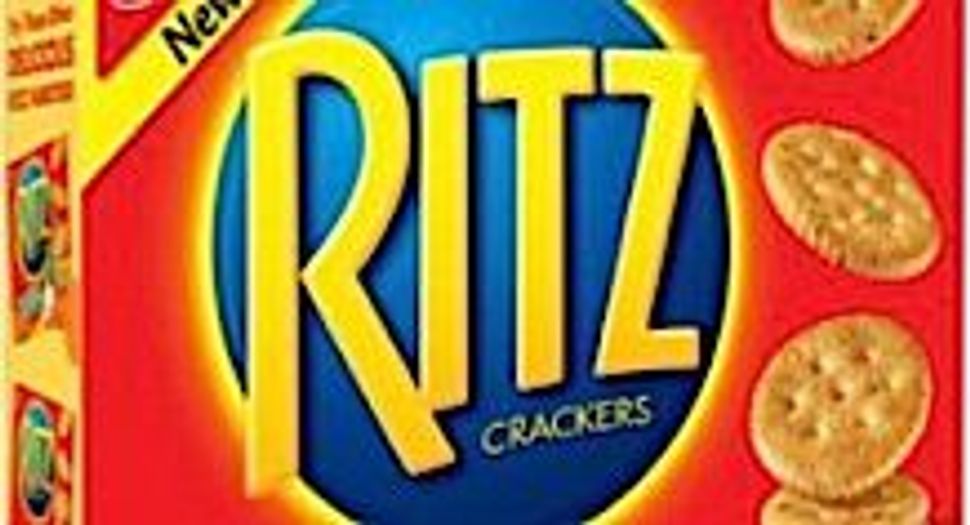 But unlike most things bacon-related, this Nabisco product bears a kosher symbol.

“There was much discussion over the decision about this product,” said Rabbi Moshe Elefant, COO of the Orthodox Union Kashrut Department.

The box for the new Ritz cracker has the signature O.U.-Dairy certification symbol.

“The reality is there’s nothing close to bacon in this product,” Elefant said. “There are artificial bacon flavorings that give the ‘bacon flavor.’”

“Nobody’s going to think this is actual bacon,” he added, noting the packaging, which has the words “Artificially Flavored” in large type right below the word “Bacon.”

At least one reviewer, however, says the cracker tastes like the real thing.

“These actually taste too much like bacon,” commented Rina Raphael, style editor for NBC’s “Today” show, who sampled the Ritz crackers before they hit shelves.

That’s not the sort of claim the people at the kosher certification agency can verify.

“We’re not in any way saying that it tastes like the real thing,” Elefant said. “That’s not at all what our certification represents.”

Elefant vaguely recalled another bacon-flavored product that nearly lost its O.U. certification for not printing the words “imitation” or “artificial” sufficiently prominently on the packaging. Ultimately, though, the manufacturer addressed the O.U.’s concerns.

Jeffrey Yoskowitz, a non-pork-eater who runs the website Pork Memoirs, pointed to beef fry, a postwar pork alternative, and Bac-Os Bits, certified kosher in the 1990s.

He also cited the J&D product line of bacon-flavored mayonnaise and salt. These items also bear an O.U. symbol.

“There seems to be a whole industry of kosher-certified bacon flavors,” Yoskowitz said.

But Yoskowitz says he won’t be sampling the new crackers.

“This is a particular type of American item I don’t want to be a part of, specifically because of the artificial flavoring,” he explained. “I’d rather have beef bacon or lamb bacon on a cracker.”

He also has a specifically Jewish objection.

“To see a Jew eating kosher bacon-flavored crackers is just as confusing as a Jew walking into a non-kosher restaurant,” Yoskowitz said.

Elefant acknowledged that some Jews will feel uncomfortable with the product.

“I’m not saying I wouldn’t eat it. But I could understand someone not eating it,” he said.

Still, the rabbi sees no problem with issuing certification in this instance.

“Kosher law is kosher law,” he said. “If proper law, supervision and certification are followed, the law is the law; no law that says you can’t have artificial-flavored bacon.”