Is Schnitzel the New Falafel? 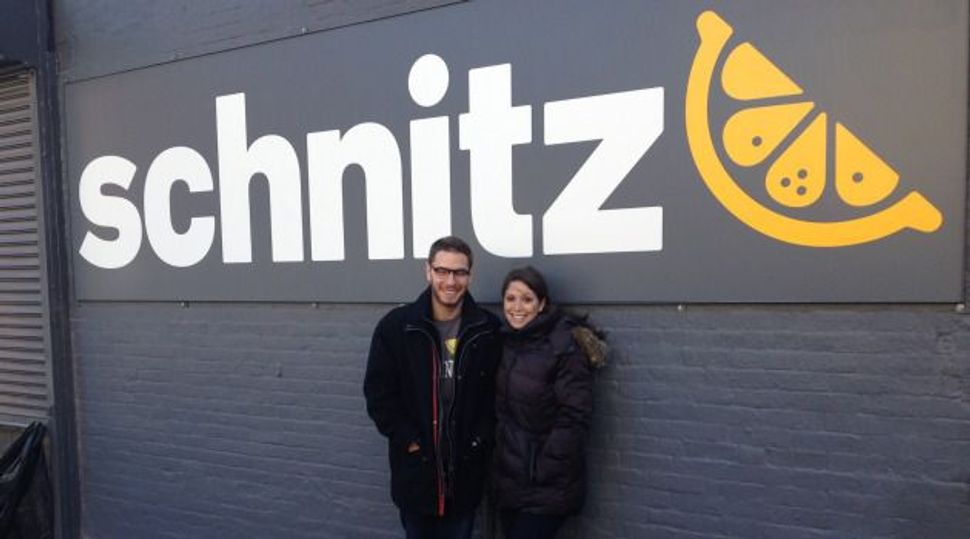 After three years of slinging their creative takes on Israeli schnitzel at Brooklyn food fair Smorgasburg, SchnitzNYC has finally gone brick and mortar. The owners and siblings Donna and Yoni Erlich, are offering new twists on the classic scnitzel at their new spot in the East Village.

Their Israeli schnitzel, which is slightly thicker than its Austrian counterpart, will continue to be showcased in original hits like the Bamberg sandwich (chicken schnitzel with pickled veggies and caramelized onion dijon) and the Sweet Onion sandwich (chicken schnitzel with roasted beet tzatziki). New comers that weren’t practical for their Smorgasburg location will also be making their debut. Ingredients like shrimp that takes days to make and pork belly that has to be cured for three days were developed specially for the storefront with culinary consultant Stephanie Alleyne. Pork and shrimp, you read those right— so while it’s not a Kosher eatery, vegetarians have the option of a butternut squash and corn schnitzel that’s topped off with honey-sriracha mayo. They’re also currently working on recipes for schnitzel and waffles, a fish schnitzel, a cheese schnitzel, and an apple crisp dessert schnitzel.

The schnitzel loving trio and first time restaurant owners had a relatively smooth opening. “There are always going to be bumps, but I’m mostly surprised with how few there were… I don’t remember ever being in a panic mode, and that’s what comes with Smorgasburg and the years of organization,” said Donna, who helped open Mark Burger in 2009 and is currently working there as the general manager in addition to working at Schnitz. “[At Smorgasburg] we all had time to practice and get to know our customers and work out the kinks,” she added. The team will continue to with their Smorgasburg locations this season.

So what does this new schnitzel heaven look like? “We wanted to make it industrial-slash-homey-slash able to convey a brand. We don’t want to look like Starbucks but we don’t want to look like a hole-in-the-wall… we want to make it duplicable but we gave it character,” said Donna. Their wallpaper is made to look like a newspaper with articles from their fascinating and informative blog that has charted their business ventures from the beginning, and the overall vibe of the place is simple, fun, and bright.

Adding more locations is one goal for the owners, but ultimately, “our goal is to turn schnitzel into the next falafel, the next household thing,” said Donna. With their beautifully fried schnitzels topped with things like a sunny side up eggs or lemongrass mayo and sandwiched into a squishy Tom Cat Bakery pretzel roll, that really can’t happen soon enough.

Is Schnitzel the New Falafel?