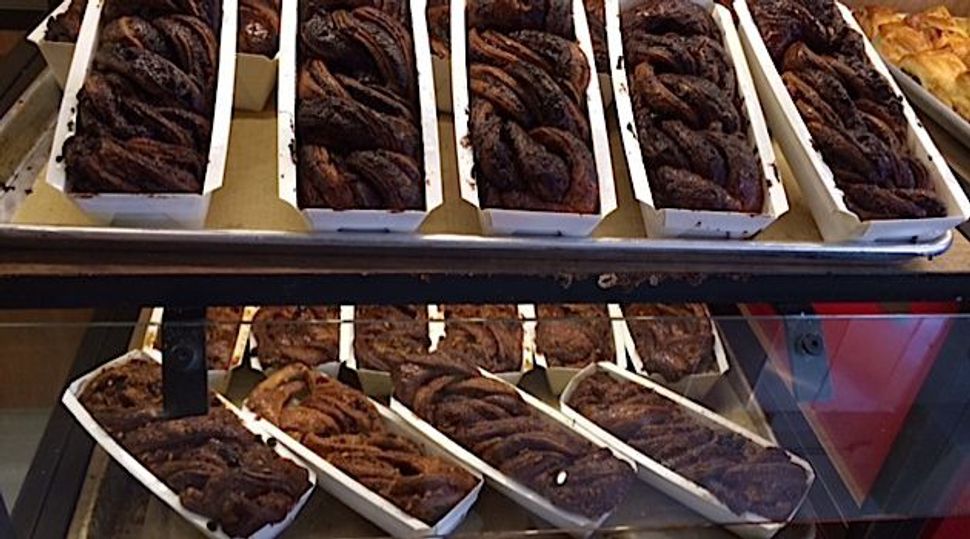 I’m just going to say it: I love bread. If it were socially acceptable, there’d be a baguette sticking out of my purse at all times. A bagel with cream cheese and nova is on my last meal short list and bread pudding makes my knees go weak. I’m a fan of all of bread’s close relatives, too — pastas, cakes, cookies, anything that has the kind of white flour that everyone tells you not to eat. Needless to say, Passover is a hard time of year for me.

Before the holiday settles in, I decided to go on one last bread bender, a tour of the best chametz I could find in New York City. Here’s what I found:

Barney Greengrass
There’s no better place to start a bread binge than the classic, Upper West Side temple of bagels and smoked fish. And my bagel with cream cheese and nova, expertly prepared by Alex behind the counter, tasted like manna. I can barely think about it without running to get another one. While at the store, one of the waiters, Julian, told me that Barney Greengrass stayed open during Hurricane Sandy and that when they ran out of bagels, they broke out the matzo and served sandwiches on it. It’s good to know that there’s no need to forgo your white fish or sturgeon during Passover.
541 Amsterdam Ave, New York, NY 10024 / 212-724-4707 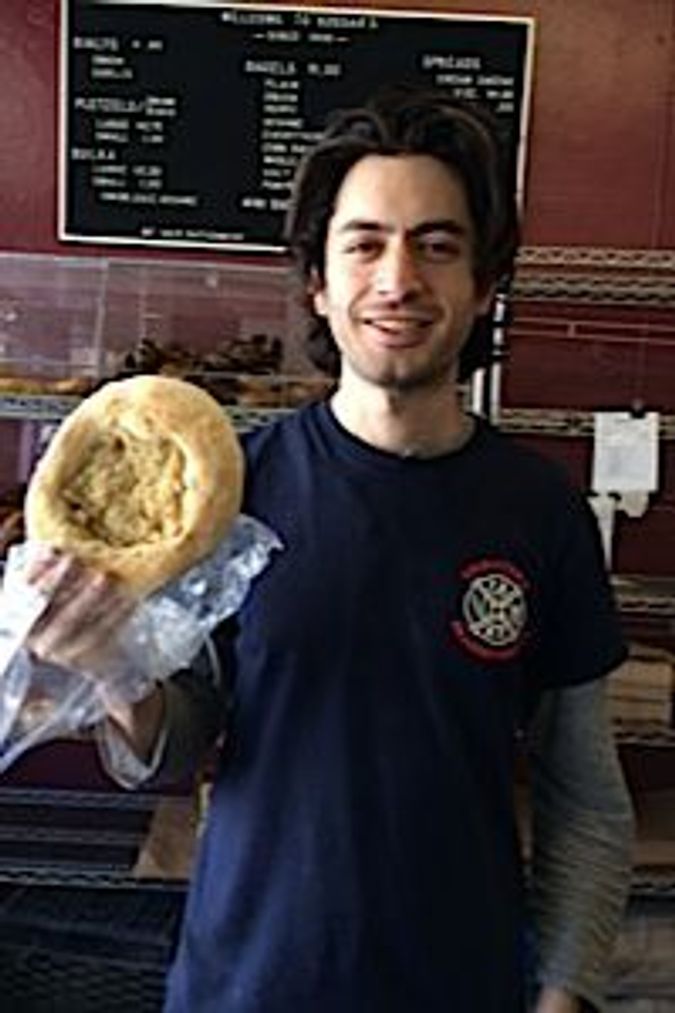 When my husband (who accompanied me on a few legs of my tour) and I arrived, we were told by Hesh at the register that they had just sold out of bialys. Quelle Horreur! Just as I was about to walk out and find somewhere to quietly sob, I heard Hesh say, “But we do have some giant bialys left.” Giant bialys!?!? I never knew such a delicacy existed. It had all the wonderful oniony chewiness of a bialy, only more of it. We also sampled a Kossar’s bagel, which was nicely firm on the outside and doughy on the inside. As we noshed, Hesh explained to us that bagels were created as teething devices for infants in Eastern Europe. Breaducational and delicious.
367 Grand Street, New York, NY 10002 / 212-253-2138

Taim
The first time I went to summer camp, I asked my parents to Fed Ex me pita from our local middle eastern restaurant — my love for this pocketed bread runs deep. The pita on my falafel sandwich was light and fluffy, spongy enough to absorb some of the hummus, tahini sauce and the dressing on the Israeli salad, but sturdy enough not to turn to mush. The pickled cabbage gave the sandwich a nice tang.
222 Waverly Place, New York 10014 / 212-691-1287; 45 Spring St, New York 10012 / 212-219-0600

Some people might think it’s unreasonable to travel an hour by subway for kugel, but this kugel is worth the trek. I arrived at Hungarian Kosher Cuisine on a Friday afternoon. The store was packed with customers ordering their Shabbat meals. I desperately wanted to sample every kind of kugel they had (from apple to broccoli), but I restrained myself and just ordered a slice of the salt and pepper and a container of the sweet kugel for dessert. The salt and pepper was superbly savory and had just the right amount of oil to melt in your mouth. Needless to say, it did not survive my walk back to the subway. The sweet kugel had a perfectly crunchy crust, wasn’t too sweet, and the mix of broad and thin noodles gave it an almost airy quality. It too was gone long before I returned to the Upper West Side.
5009 16th Ave, Brooklyn, NY, 11204 / 718-851-0400 Note: The store only makes kugel on Thursdays and Fridays.

Eating the chocolate babka at Breads Bakery is a life altering experience. They had just put out a fresh batch when my husband and I entered the store and the smell was positively intoxicating. We purchased a loaf, went immediately to the seating counter and started shoveling the still piping hot dough smothered in rich chocolate into our mouths like savages.
18 East 16th Street, New York, NY 10003 / 212-633-2253

Sander’s Bakery
The rugelach and hamentaschen practically overflowed from the shelves at this Hasidic bakery in South Williamsburg. I finally settled on a piece of the house-made marble pound cake. Never one for math and numbers, when the woman behind the counter asked me how much I wanted, I said “Oh, I don’t know, a pound?” This turned out to be more cake than I could safely consume in one sitting, even eating for two as I am expecting, but I managed to polish it off over a few days, hacking off a slice every time I wandered into my kitchen.
159 Lee Avenue, Brooklyn, NY 11211 / 718-387-7411 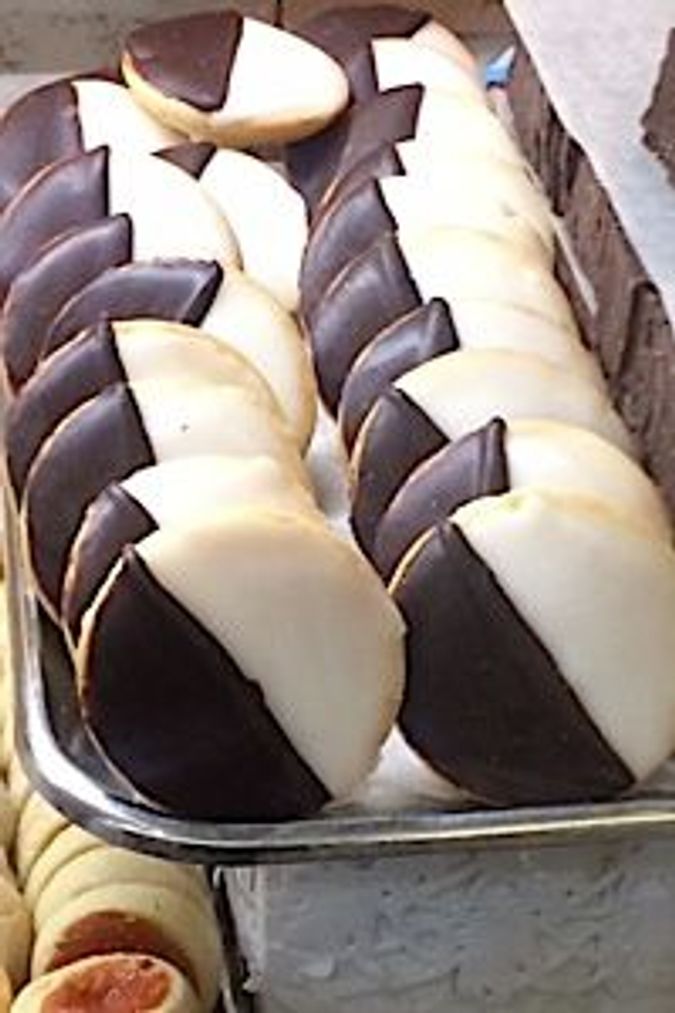 I couldn’t let my tour end without some cookies. And for those, I headed to Orwashers, the jewel box Upper East Side bakery that’s been around since 1916. The black-and-white cookies, which come in large and mini varieties, are sinfully delicious. The cookie itself is cake-like without being too dense, and the icing is just the right amount of sweet. The hamentaschen are so light and delicate that it’s perfectly okay to eat three in a row. I’m not usually the biggest fan of rugelach, but the ones at Orwashers, not overly jam-y. Their croissant-like quality could convert me. Orwashers also has a peanut butter-and-jelly bar and hand-filled donuts. I know exactly where I’m headed when Passover is over.
308 East 78th Street, New York, NY 10075 / 212-288-6569

All photos by Leigh McMullan Abramson.