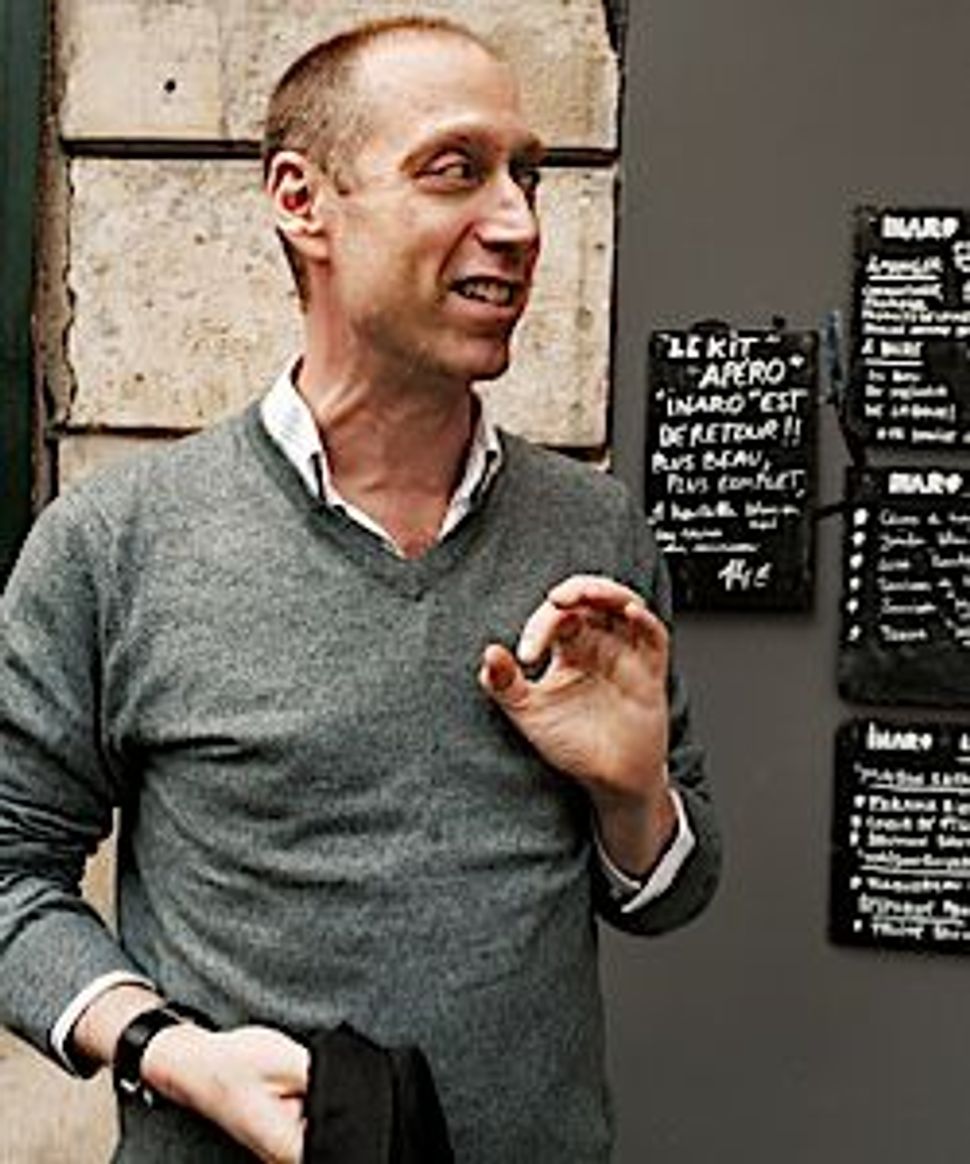 Cookbook author and writer David Lebovitz is known for many things but mostly for his devotion to all things sweet. He spent 13 years refining his pastry skills at Alice Waters’ restaurant Chez Panisse, authored a book dedicated entirely to ice cream (“The Perfect Scoop”) and he regularly documents Paris’s best patisseries on his blog “David Lebovitz: Living the Sweet Life in Paris.”

In his newest book “My Paris Kitchen: Recipes and Stories” (April 8, Ten Speed Press), Lebovitz shares the recipes both sweet and savory that he cooks for his friends (and himself) in his Paris apartment.

The book opens with almost 30 pages of Lebovitz discussing his most-used ingredients — like anchovies, butter (in France, he says, there are two kinds, the good kind and the great kind), herbs, mustard, etc. — and equipment. Each recipe is preceded by a full page essay, for example, his tapenade recipe follows a story about his relationship with his neighborhood olive seller, who tends toward the grouchy side. While some may find him overly chatty, fans of food blogs will not. These anecdotes, in fact, give the reader a greater sense of his life in Paris, which is, after all, part of the appeal of the book.

The book features recipes for French classics like pissaladière (onion tart) and coq au vin (chicken in wine sauce) but Middle Eastern ingredients like dukkah, pomegranate molasses and harissa are all to be found as well. And it wouldn’t be a Lebovitz book without a mouth-watering dessert section including a chocolate terrine with fresh ginger crème anglaise and duck fat cookies.

Alix Wall Skyped with him recently to talk about his new book, his childhood food memories and the best spots in Paris for Jewish fare.

Did you have a food-centric family?

I was very fortunate that my mother and my grandmother were very good cooks. It was only when I went to college that I realized people had mothers who were bad cooks. I’m mixed ethnically and religiously. On my mother’s side, my grandfather was Syrian and my grandmother was Scandinavian, and on my father’s side, both grandparents were Romanian Jews. This was good because we had our pick of all the best holidays. We could all be “Jewish light” and not have to worry about some of the other stuff.

What are some of your earliest food memories?

My grandmother often made a chicken with rice and apricots, and desserts with pistachios. On my father’s side, we had a lot of family get-togethers, and I mostly remember the sweets, cakes with almonds, coconut macaroons and chewy sweets with honey.

Did you always want to work in restaurants?

I worked my way through college in New York in restaurants. After college, I didn’t know what I wanted to do. I spent a year traveling through Europe, and met a woman in my travels who lived in San Francisco. She invited me to visit her when I got home, and I went there, and fell in love with it. This was the height of California cuisine in the 80s. I had the Chez Panisse cookbook, and felt “This is me, this is everything I believe about food.” I had been living in a small town in upstate New York, buying everything from farmers before it was chic.

You were at Chez Panisse for 13 years. That’s a really long time to be in one restaurant, most chefs move around more frequently. Why did you stay so long?

Working at Chez Panisse is a problem, but a good problem to have. Once you’ve worked there, it’s hard to go somewhere else. Alice Waters insisted on using the best ingredients. Money is no object. You’re always working with the best ingredients surrounded by people who are equally interested in cooking, not who are just trying to make their way through college, but who are dedicated, strong cooks. It’s an amazing environment, and it’s hard to leave. But once I was 40, I felt a little too old to be cooking in a restaurant. I had done it a long time and I loved it, but it can be very stressful. I left and started writing books.

You started your blog before food blogging became such a “thing.” Did you have any idea it would take off in that way?

No, everyone told me I was wasting my time. As a writer you spend a lot of time alone, just writing. When I started in 2004, it was just a web site, no one even knew what a blog was, and then maybe five or six years ago, blogging really took off. At that time, there were maybe six or seven food bloggers. We used to get together for dinner. Now it’s incredible, people are becoming huge stars from their blogs, and you can find blogs about anything you want, like a blog about raising chickens in your backyard in Oakland.

You have a lot of Middle Eastern dishes in your new cookbook.

I love Middle Eastern food. I was a vegetarian in college, and ate at lot of hummus and baba ganoush. People who don’t live here don’t think about it, but there are a lot of Middle Eastern restaurants in Paris and that’s how I like to eat. I have been to Lebanon and Israel, and I love that kind of food, with a focus on fresh vegetables and olive oil. Mediterranean food has so much cross over. A lot of southern French food is Arabic inspired, and a lot of Mediterranean dishes work well as a first course, like beet hummus.

Speaking of Israel, can you talk about what happened on your blog during your trip there? You wrote: “The food was more fresh and exciting than I could have imagined, and I was excited to share everything I had eaten on my blog. Within minutes of posting, messages came flooding in accusing me of everything from being an international spy to attempting to redefine geographical borders, which I was apparently doing while sitting in front of my laptop in my pajamas, uploading photos of chickpea dip…Every time I wrote about a dish, I was informed that, no — that dish isn’t Israeli — it’s Lebanese or Syrian or Iranian.”

I felt like an idiot. Of course I knew I was going into this politically charged situation, but I was just meeting people and going to farms, and eating shakshuka and hummus. The whole Middle East is very contentious, a friend who’s Lebanese told me “You don’t understand, this is just what we do, we fight, we just fight. We’ve been doing it thousands of years. Even without Israel, we’d fight.”

There was a lot about it I loved. It’s a really dynamic and enterprising place. Israelis are exciting and excited. It’s a really special place, I would love to go back. But yes, I was surprised at the backlash, as I didn’t even write about anything political. I’m not a political writer, I don’t have the knowledge to discuss it and debate it. I’m a cookie baker, so anyone who thinks what I say is that important should probably be searching for journalists who know more than I do.

Despite all of this, we had a standout meal at Haj Kahil an Arabic restaurant in Jaffa. I was so excited about it I posted about it right away, with lots of photos. When we went back, the chef gave me the hugest hug, it really moved me.

How has living in Paris influenced your cooking?

Well, I’ve really slowed down. It’s not like in America where you get everything in one fell swoop. You take your time to find things, and I’m really particular about what I buy. I get butter at one place, flour at the health food store, since I can get organic. The French have simple tastes, they don’t like a lot of fireworks, so now I tend to work on singular flavors rather than a whole bunch of stuff going on. It’s definitely simplified the way I cook, and I’ve toned things down for that palate. However, when I cook Mexican and Korean food, I keep it spicy and don’t change it for the French. But I’ve really learned the beauty of singular flavors.

Any recommendations on the Jewish food scene in Paris?

I love Maoz, I think it’s an Israeli chain. They have falafel with about four kinds of hot sauce and so many salads, and you can help yourself to toppings, and very good French fries. Believe it or not, it’s really hard to get good fries here. Most of them are not cooked enough. One of my favorite Middle Eastern pastry shops is called Bague de Kenza, they have the most extraordinary North African pastries.