An Italian Love Story Turns Into Journey into the Passover Kitchen 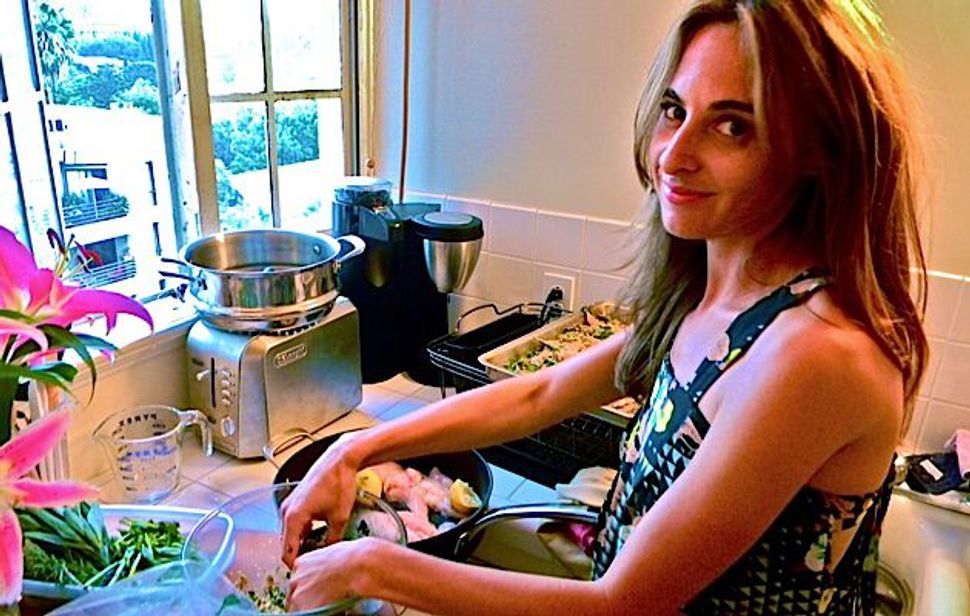 Image by Courtesy of Rachel Shelasky

A year ago, I came to Rome to work on my next book, take a break from New York, and enjoy la dolce vita ? decidedly alone.

The day I arrived in the city, lost and bedraggled, I asked a stranger on a motorbike for directions. He was wearing beat-up jeans and had a devilish stare. Over coffee I learned that the mysterious stranger, with his hand-rolled cigarettes and arrogant charm was also? Jewish. David was an ?Anav? ? one of the oldest Jewish families in Rome.

I grew up in a strong Jewish home in Massachusetts, but my connection to my Jewishness had faded. After 18 years in New York, chasing excitement and success, I lost touch with my religious identity. I was always proud to be Jewish, but it all felt rather irrelevant.

And yet, when the Anav family graciously took me in, opening the majestic double doors to their beautiful Piazza Bologna apartment that first Shabbat and making me feel ever so warm and welcomed, suddenly it all felt very relevant.

Roman Jews are neither Sephardim nor Ashkenazim. They are Roman. Their Hebrew is almost unascertainable. It is belted out loud and fast, with thick Italian accents, and at the end of Kiddush they happily shout, ?Hazak!? (Hebrew for ?strong.?)

They don?t know Yiddish, although meshuga, has made it into a conversation or two. They don?t eat ? and some have never heard of ? bagels, and the name ?Larry David? doesn?t ring a bell. Their services are impassioned and amplified (a wild assembly of gossiping and davening).

Jewish life in Rome centers on the historic ghetto ? a neighborhood that is equal parts familiar and fascinating to me. The big synagogue emanates an upbeat message of Jewish solidarity. It was there that David?s mamma and I first spent time alone. It was Yom Kippur, and I arrived wearing all black while everyone else was dressed in white. I felt uncomfortable and anxious. When I found Edith sitting in the balcony of the ?old-school? synagogue, she had saved me a seat, and waved me over without any hesitation. Our stomachs growled as we prayed side by side.

Like many of Rome?s Jews, Edith came from Libya after the Six Day War. At first I wasn?t sure if she would like me. I was a 35-year old, fiercely independent writer and wanderer with a lotus tattoo, a liberal upbringing and a lusty memoir about it all. She was a reserved Tripolitania immigrant who first struck me as a prettier Meryl Streep.

She came to Rome as a young girl to live a traditional, proper and private life. She?s also a wonderful cook with a meticulous home, and her children adore her and, of course, her food. (Imagine the culinary sovereignty of an Italian and Jewish mother combined!). Anyone would be intimidated.

But she and her dolce husband, Aldo, invited me into their home for each Shabbat and Jewish holiday over the past year. Over plates of the community?s signature dish, fried artichokes, Aldo shared poignant stories about how his family survived the Nazi invasion ? they were hidden and protected by their non-Jewish neighbors ? and we grew closer.

By Purim, I felt more relaxed around Edith. But I still hadn?t dared to step into her kitchen. I asked her if she could teach me to make a traditional Roman Passover dish. She agreed, but she warned that with her recently broken foot, the cooking session ?may not be so fun.?

Nonetheless, I showed up at her apartment, ready to make pizzarelle con miele ? a popular Roman Passover cookie that is really more like a fritter, involving cacao, pine nuts and honey. Aldo?s nonna made them for him when he was a boy.

As a gesture of gratitude, I always try to bring Edith and Aldo Jewish desserts from my Ashkenazi heritage. I?ve brought them my mother?s famous rugelach, honey cake from Zabar?s and this time, because it was around Purim, some homemade hamantaschen. They hadn?t heard of ?hummies,? as my family calls them, because they are not part of the Roman Jewish tradition. She thanked me, compared them to crostata and politely put them aside.

I was jumpy and clumsy baking in front of Edith. It?s awkward invading somebody else?s kitchen, let alone that of a highly refined woman whose son you are dating. Her kitchen is dauntingly spacious and clean. It?s all white, flooded with natural light and punctuated with fine china and silver platters. I immediately thought how my mother and sister, futzing around in their artsy Brooklyn lofts, would kill for that counter space. Then I concentrated on not making a mess.

While I combined the ingredients, careful not to spill or splatter on Edith?s pristine prep area, she wistfully recalled how Libyan Seders were all about tradition, anticipation and weeks of preparation, whereas the Roman Seders are ? surprise ? all about the food. Of course, they read from the Hebrew-and-Italian haggadah, and it?s as long and laborious as Seders should be, but the focus is the feast. Many of the dishes come from Italian Shabbat meals: polpette con riso, or little meatballs with rice, brisket with gravy and also something that sounds like a matzo lasagna made with meat and vegetables.

As I gathered ingredients, I asked about haroset, one of my favorite Jewish foods. She said the Roman Jewish haroset is thick and dense, made with figs and dates, and used on matzo like a flavorful Mediterranean spread.

When all my pizzarelle ingredients were mixed together, I placed my lumpy and misshapen cookies into a frying pan. Edith watched from the table, looking aristocratic even while injured.

But I burned the honey. It was almost black. Edith asked for her crutches. (Oy!)

Hovering over the sticky pot, she sighed, ?Mamma mia, it?s supposed to look like gold.? I tried to pull off the light-hearted-American ? oh well. She shrugged her shoulders, but in a nice way.

In the end, the pizzarelle were what you might call a beautiful ruin. I kissed Edith goodbye, grabbed the extra pignoli and made my own exodus.

Alyssa Shelasky is the author of ?Apron Anxiety: My Messy Affairs in and out of the Kitchen.?

An Italian Love Story Turns Into Journey into the Passover Kitchen