Manischewitz: Now Brought to You by Bain Capital 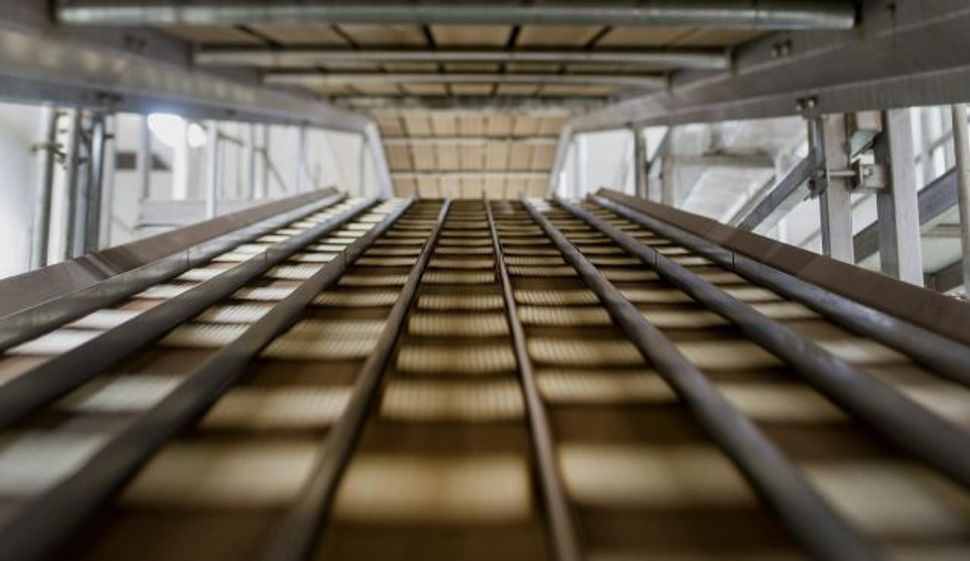 Matzot on a cooling conveyor Manischewitz factory in Newark, New Jersey. Photo by Bloomberg via Haaretz

Kosher food giant Manischewitz, whose matzot are known to generations of Jews in the United States and elsewhere, is expected to announce on Tuesday that it has been purchased by Sankaty Advisors, an arm of the private equity giant Bain Capital.

The deal, which comes just a few days before Passover, is expected to help the 126-year-old company expand beyond the kosher aisle, the New York Times reported.

Under its new owner, a firm with expertise in revamping corporate strategy, the company is expected to promote “kosher” as a quality-control designation, rather than a simply religious one.

Though private equity tends to conjure images of stripping companies, Sankaty plans to act as “stewards of the brand,” said a person briefed on the deal who was not authorized to speak publicly about it before the announcement.

“It’s a pretty powerful certification to be kosher, because it means you are holding your product to a very high standard,” said Mark Weinsten, the newly appointed interim chief executive of Manischewitz, who is also a senior managing director at FTI Consulting. “Why is that not applicable to people who don’t keep kosher?”

“There is, I believe, a consensus among American consumers that the more supervision the better,” Rabbi Yaakov Y. Horowitz, the company’s chief rabbi, said in an interview. “There was always a good feeling in American culture about kosher.”

The company estimates that roughly 60 percent of its products are now sold in kosher aisles of supermarkets. But by introducing new products and relying on more mainstream foods like sardines and soup, it hopes to shift that balance.

Manischewitz is also trying to stay abreast of the latest in food trends, including by offering gluten-free items. Mr. Weinsten said his daughters would be enjoying gluten-free Manischewitz fare at their family’s Seder next week.

Founded in 1888 as a small matzo bakery in Cincinnati, Manischewitz grew into a kosher food empire, controlling 80 percent of the United States matzo market by 1990. That year, after many decades of family ownership, the company was sold by a grandson of the founder to Kohlberg & Company, a private equity firm.

Eight years later, it changed hands again and took a new name: the R.A.B. Food Group. In 2008, after a new investment from Philip A. Falcone’s hedge fund, Harbinger Capital Partners, the company that was founded by Rabbi Dov Behr Manischewitz reclaimed the family name.

Sankaty, which had been a lender to Manischewitz, now owns all of the company’s equity. The deal’s price was undisclosed.

How to Make 31,000 Boxes of Manischewitz Matzo from Jewish Daily Forward on Vimeo.

Manischewitz: Now Brought to You by Bain Capital