For Moroccan Jews, Passover Has a Sweet Ending 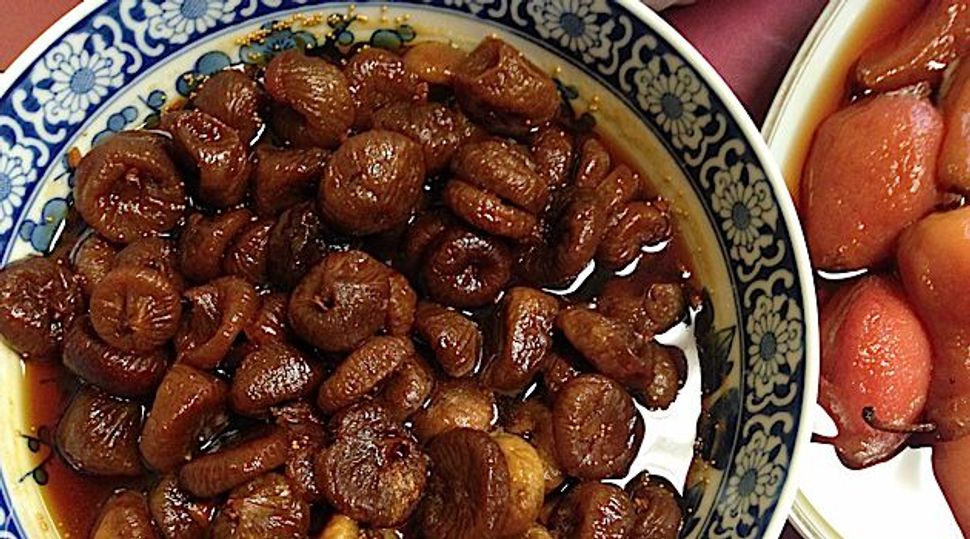 For Moroccan Jews like Elmaleh, the end of Passover marks the start of the Jewish-Moroccan festival Mimouna — a night of open house parties complete with a feast of traditional sweets that honors the Exodus story.

This year, Elmaleh has prepared platters that glisten with sugary glazes: slivers of candied orange peels, fat eggplants in sweetened ginger syrup, poached Bosch pears in a Cointreau-based syrup and figs cooked in syrup with white wine and vanilla.

Observing Mimouna is “a beautiful thing,” Elmaleh told me in early April while taking a break from cooking tagine and couscous at his cozy restaurant Simon’s Café in Los Angeles. In Montreal young Jews gather for Mimouna hops and in Israel, Moroccan Jews welcome their Ashkenazi neighbors. “The welcoming — that’s the big thing,” explained Elmaleh.

Growing up in Morocco, his family would leave their door open for the night, welcoming friends and neighbors to a party where men would don elegant fez hats, while women wore gold jewelry and shone in bright caftans adorned with gold stitching. Guests would sing and dance until dawn to Moroccan party music on the stereo while sipping mint tea, yogurt drinks and coffee.

Elmaleh’s mother would spend entire days during Passover preparing sweets for the family and their guests. The centerpiece of Mimouna in their home was always mufleta, a thin pancake made with dough and lightly fried, meant to be topped with butter, honey, jam or chocolate. As a kid, Elmaleh would help his mother make coconut macaroons, stuffed dates, marzipan, jams and preserves.

They would visit the busy souks, or marketplaces where vendors would hawk dates and walnuts, yelling at the tops of their voices, “Hey, this is for the Mimouna!”

When his family moved to Israel when he was 12, they brought their Mimouna along. Later, Elmaleh carried it with him to Japan where he worked as a chef for nearly two decades. And now, his family’s Mimouna has found its way to Los Angeles.

Elmaleh knows only a few other Jewish Moroccan families here, so the festivities are considerably smaller than what he remembers growing up.

But, he still cooks his mother’s syrupy figs and sugar-soaked pears saying, “even if only a few friends come, that’s good too.”

For Moroccan Jews, Passover Has a Sweet Ending