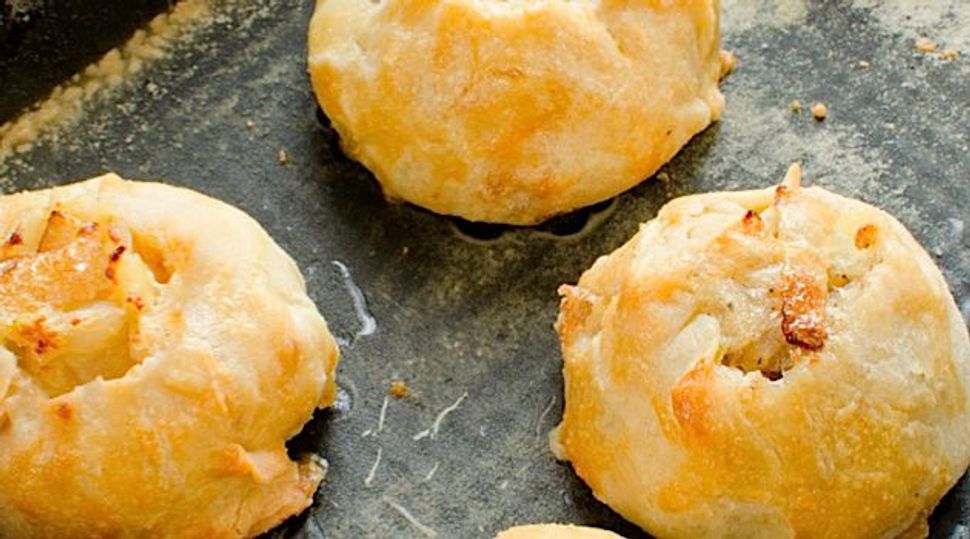 If you live outside of a knish capital, try making the potato dumplings at home with the recipe from Brooklyn’s legendary knishery Mrs. Stahl’s. Image by Thinkstock

Fannie Stahl’s granddaughters summoned recovered memories to bring this recipe to life. Toby Engelberg, who sold her knishes in the Bay Area for a while, enlisted the help of her elder cousin from New York, Sara Spatz, who, as a young woman, worked in her grandmother’s shop in Brighton Beach. I was there to learn. What struck me most was the aroma. It filled the kitchen as soon the skins were peeled from the first onions, and lingered long after the last tray of knishes had cooled.

Turn on oven on low until dough is ready. Mix flour, sugar, and salt. Add oil and water. Mix with a spoon until the dough pulls together, or use a food processor or stand mixer (with a dough hook).

Turn out the dough on board and knead it, incorporating all pieces. Knead until dough is one piece, smooth and glossy. Turn off the oven. Oil the dough and place it in oiled, covered bowl. Place in oven until you are ready to use it. Let the dough rest at least 2 hours; the dough should barely rise, if at all. Keeping the dough overnight in the refrigerator is fine. Bring it back to room temperature before use.

Scrub potatoes and peel them, unless the new potatoes have very thin, unblemished skins. Boil potatoes for about 20 minutes until knife tender, then drain. Mash with a potato masher. Add oil, salt, and pepper to taste. Mix. Stir in the onion.

Assembling and baking
Vegetable oil and flour as needed

Preheat oven to 450 degrees. Roll out about half the dough on a lightly floured counter or tabletop. Roll with handle-less rod-style rolling pin out from the center until dough is thin enough to see through, about 1 ⁄ 16 -inch thick.

Oil top edge of dough with a pastry brush. Place a 2-inch-diameter line of filling about 2 inches from the top edge of the dough. Pick up top edge and drape over filling. Brush oil on dough in a 2-inch strip on the bottom edge of the filling. Pick up the dough with filling and roll again onto the oiled dough, compressing the filled dough as you turn it. Repeat until the dough covers the filling three to four times, being sure always to brush oil on the dough first.

Use a knife to separate the filled potato knish log from the remaining dough.

Cut off edges of filled dough. Cut the filled roll into pieces about 6 inches long and coil each piece like a snail. Tuck the remaining end into the bottom of the coil.

Alternatively, place stuffed roll of dough onto ungreased cookie sheet and slash with a knife crosswise every 2 inches. Leave an inch of space between each roll or coil of dough.

Bake 20–25 minutes until the knish skin is browned and knishes are cooked through. Start knishes on lowest rack of the over and raise them to top rack after about 10–12 minutes. Let the knishes cool on pan. If you cooked the knishes in long rolls, cut them into individual pieces.

Knishes can be reheated in the oven or in a skillet on the stove top.

Excerpt from KNISH: In Search of the Jewish Soul Food by Laura Silver, published by Brandeis University Press/University Press of New England. This recipe first appeared on J. Weekly.