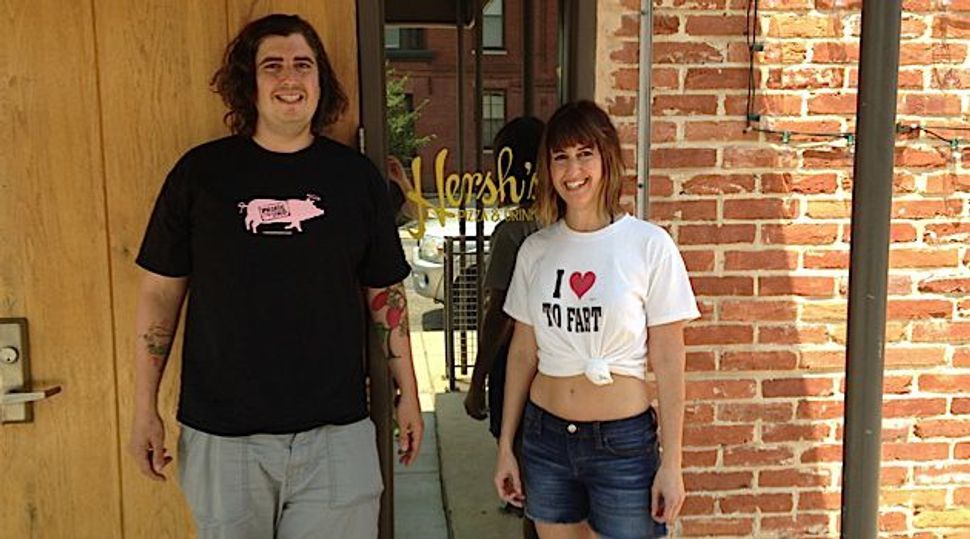 It must be a first for Baltimore: An Asian-Jewish culinary mashup, courtesy of an Italian joint and a hip local coffee shop.

Siblings Stephanie and Josh Hershkovitz, who own Hersh’s pizzeria in downtown Baltimore, are teaming with Phil Han, the Korean-American owner of sleek new cafe Dooby’s, on a June 19 Jew-sian Mashup pairing Han’s Korean barbecue with Hersh’s potato latkes. “It’s what happens when two Jews and a Japanese-influenced Korean walk into a bar,” enthuses Hersh’s web site.

“We started talking to Phil when he ate at our restaurant one night, and the idea was born,” said Stephanie Hershkovitz, a former lawyer who switched gears to food after decamping to her hometown from Brooklyn. “Phil’s place serves coffee, but with Asian influences. My brother and I are Jewish. And it just sounded like fun to put his Korean barbecue on our latkes,” which Hersh’s usually serves over Hanukkah.

All of it will get washed down with brews from Union Craft Brewing, a Baltimore brand whose creators are Josh’s old Hebrew-school friends. Stephanie said she expects to sell all 40 seats for the event. “We have a fair amount of regular customers on the guest list, and I’d say most of them are not Jewish,” she said.

Hersh’s itself is a mashup of sorts. Josh Hershkovitz cooked in A-list Baltimore kitchens like Petit Louis and Charleston before working for his father, Avi, at The Market at Highlandtown, the family’s downtown supermarket. Stephanie, meanwhile, had tired of her legal work – and of New York. “Nobody wants to be a lawyer,” she joked.

The pair was set on opening their own business, but a concept proved elusive.

“Baltimore’s developing as a food town, but it’s not as advanced as New York,” Stephanie told the Forward. “My brother and I love pizza, and people already know what it is. So rather than introduce a completely new kind of food, we went with something familiar.”

The difference, she said, is that “everything is made by hand. We make our own pasta, sausage, and mozzarella. It’s a vocabulary people are already familiar with, but done with an Italian ethos — simple and clean. We always aim for one fewer ingredient in everything.” Hersh’s pizzas — like one topped with kale and pistachio with fontina cheese ($12) — come to the table uncut, Neapolitan-style.

What’s next for the pair? “We love Asian food from all over, so that’s a possibility. And we might do a shipudei” – the ubiquitous Israeli meat restaurants that serve salads and grilled skewers.

The first annual “Jew-Sian Mashup” costs “$35 for grub, $55 with all-you-can-drink Union brews, and $65 for an early-access cocktail hour with a flight of libations by our rockin’ barmaid,” according to Hersh’s web site.