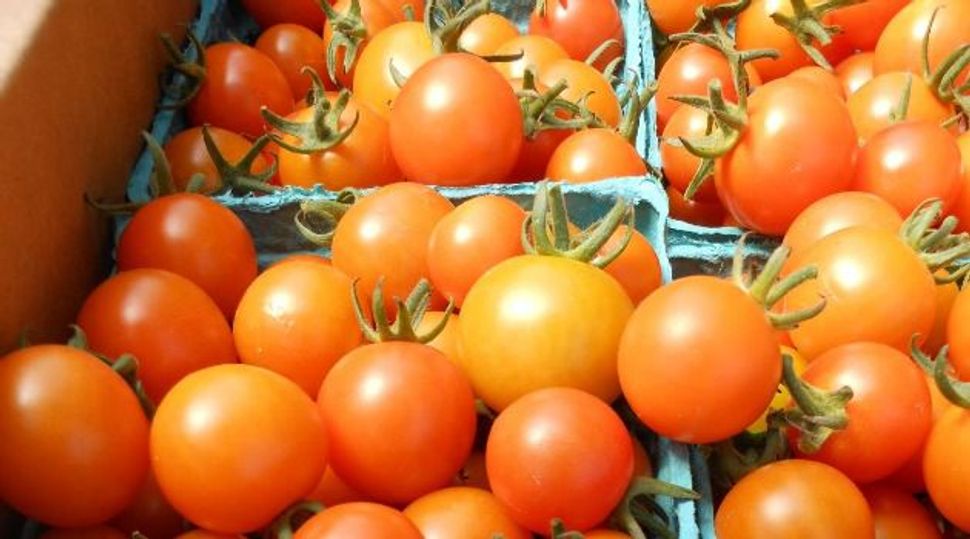 (JTA) – I will now share a cardinal truth of the life agrarian: If you give them tomatoes, all else is forgiven.

OK, the truth may only be trivial. It might not even be true. But some conviction along those lines must have lain behind my decision to plant 1,000 — yes, 1,000 — tomato plants this year. How this came to be is something that unfolded in typical fashion: I seeded a couple hundred plants in drill trays in early spring, looked at them after germination and — freaking out that they wouldn’t be nearly enough — ran to the computer to rush order more seeds that I plunged into soil immediately upon arrival, hoping they would catch up.

They did. In fact, I had hundreds extra, a predicament born partly of the local farmers market informing me after the second week I was no longer permitted to sell potted plants. Thus began a frantic effort to give away these suffering tomatoes, suffocating slowly in their pitifully inadequate four-inch pots. That endeavor was only partially successful. Earlier this week, a few dozen plants, some throwing pathetic little fruits in a last ditch attempt to pass on their genetic material, wound up in the compost pile. (It wasn’t necessarily a bad fate; there they were greeted by several hundred pounds of rotting carrots and cucumbers.)

The vast tomato planting also raised the question of where to store all those fruits between harvest and market. The answer presented itself in the form of a 14-foot box truck that hadn’t moved in months from its parking spot at the auction house across the street. Its owner was more than willing to me let me stash the truck in the shade and use the box as a ripening area, but the engine wouldn’t start when we tried to jump it. So my neighbor — a man I will write more of later, as he has quickly become as indispensable to our success this season as Fred — threw a chain under the body and towed the thing over to the farm.

All this chaos led last week to a milestone of sorts: The first appearance of tomatoes in our CSA boxes. To me, this is the real beginning of summer, the moment when the northeast’s signature warm-season crop makes its debut. If all goes well, our plants will produce a swarm of fruit over the next eight weeks. With a little luck, many will go even longer. The inaugural tomato variety is the one I consider the finest I’ve ever tasted: The sungold. The product of the breeding genius of a Japanese seed company, this cherry tomato has a deep yellow-orange color and a flavor that is more than just sweet. With their addictive syrupy tang that bursts in your mouth, sungolds are a reliable sellout at the market. On average, I eat one for about every 10 that I harvest.

I had never encountered a sungold before 2010, when I wandered into the greenhouse of the farm I was working on in Vermont, plucked one off the vine and was transformed. Now, no self-respecting small farmer is without them. I’ve seen half pints of these things selling for as much as $4.50 at the farmers market. That’s about a quarter per cherry. Not too shabby.

The onset of the tomato harvest — now a daily task on the farm — is an opportunity to test just how eternal the truth of abundant tomato giving actually is. Not that we have anything to be forgiven for. Our boxes these last weeks have been teeming with seasonal goodness. Squash, kale, beets and basil have all made regular appearances. But the sight of all those plants weighted down with fruit, one or two of which begin to blush red each week, has removed some weight from these shoulders, now starting to stoop with the fatigue of high season. If all else fails, there will still be tomatoes. And for that, I rest a little easier.