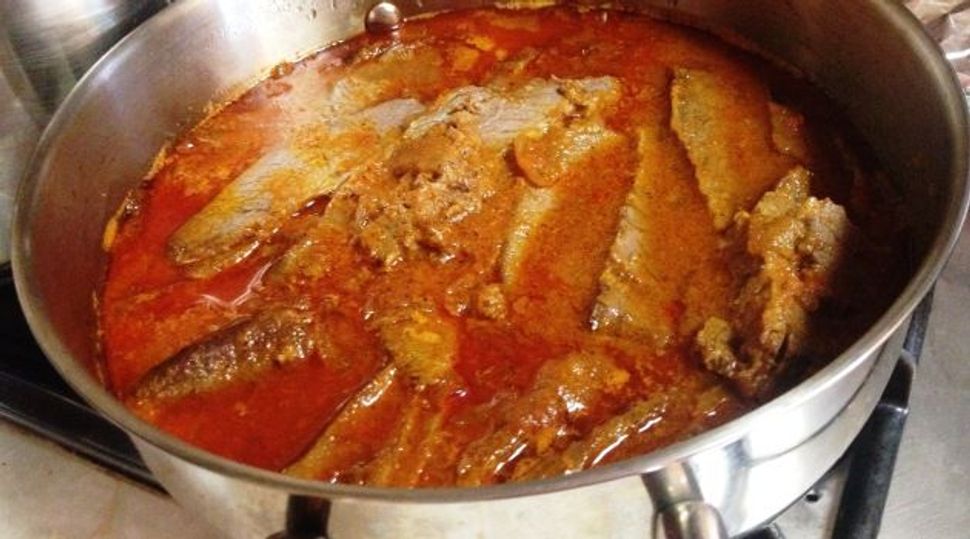 I decided to become a vegetarian when I was 12 years old, much to my mother’s dismay, and maintained my meat-free diet for almost 15 years, during which time I never missed poultry or beef for even a moment. I decided to start eating meat again when my husband and I began dating seriously. The decision arose partially out of a sudden low-grade gluten intolerance that forced me to reevaluate my diet, and partially out of solidarity for my husband’s meat-eating ways.

See, my husband loves meat, so much so that his idea of a great sandwich is a corned beef-pastrami combo wrapped in turkey rather than bread. Give him a plate full of nothing but steak, and he’ll scarf it down. At barbecues, my husband has been known to devour enough hot dogs to rival those who compete at Coney Island. And when he needs an afternoon pick-me-up, he’ll comb through the fridge in search of leftover chicken rather than opt for the more-accessible items out on the counter.

I realized early on that if I was planning to live with this man, I’d need to be willing to compromise when it came to eating meat – especially because my husband is a fabulous cook and would get (somewhat understandably) insulted when I’d refuse his offerings in the form of all things fleishig. At first it was hard, not because eating meat disturbed me morally, but because I really just didn’t like it. But I got over it, quickly, because in my husband’s eyes, eating together meant actually sharing in the same foods at the same time, regardless of who prepared them.

Fast forward almost eight years, and my meat eating is still sporadic at best, reserved mostly for occasions such as Shabbat meals (as in, ones where we actually have people over) and holidays like Rosh Hashanah and Thanksgiving. But that seems to work for both of us.

These days I do most of the cooking in my household since my husband’s job is more time-consuming than mine, and that means catering to his carnivorous ways. My strategy is often to prepare meals where meat isn’t the star but can be easily integrated. In the winter, I’ll whip up a host of vegetable and grain-based stews, any of which could serve as a hearty meal on its own or become a welcoming base for some meat on top. During the summer, we’ll opt for lighter fare such as salad, but I’ll make sure to have cooked chicken on hand that my husband can simply mix in.

For the most part, this system works, but there are meals for which it doesn’t. Since we keep our house kosher, any recipe featuring cheese by default must be vegetarian. And on the flip side, if I’m making spaghetti and meatballs, omitting the meatballs means I’m basically left to dine on spaghetti, which, sans meatballs, doesn’t offer very much in the way of nutrition. But just as I’ve learned to live with and even enjoy eating meat, so too has my husband come to realize that meat-free meals can be filling, satisfying, and downright delicious.

Incidentally, our toddler seems to be independently leaning toward the vegetarian camp. He’ll often reject poultry, and he much prefers plain tofu to just about any animal-based protein.

The other day, I surprised myself: When I placed a bowl of vegetables in front of my son and asked what he wanted on top, I was secretly hoping he’d opt for the turkey. Clearly I’ve strayed far, far away from my vegetarian roots, but actually, I think I’m in a much better place than I was eight years ago. Whereas I used to regard meat as something I felt forced to eat, I’ve realized that although it’s not usually my preference, meat can, in fact, be delicious. (Case in point: my husband’s meatballs are some of the yummiest things I’ve ever put in my mouth). And if eating meat lends itself to a happy husband and home, I’m more than willing to take one for the team.

Instructions
1) Sauté onion in oil until golden
2) Add garlic, cumin, turmeric, cinnamon, and nutmeg; sauté one additional minute
3) Stir in squash, beans, lentils, and kale
4) Pour in tomato puree, then add water to just cover the mixture
5) Bring mixture to a boil and then reduce heat to medium-low
6) Cook covered for 1.5-2 hours, stirring occasionally
7) Season with salt and pepper
8) Serve as a vegetarian stew, or top with meatballs (turkey/beef) or diced chicken

Maurie Backman is a writer and editor who loves to feed others and share her recipes with the world. You can check out some of her sweet concoctions at busybakingmama.com.