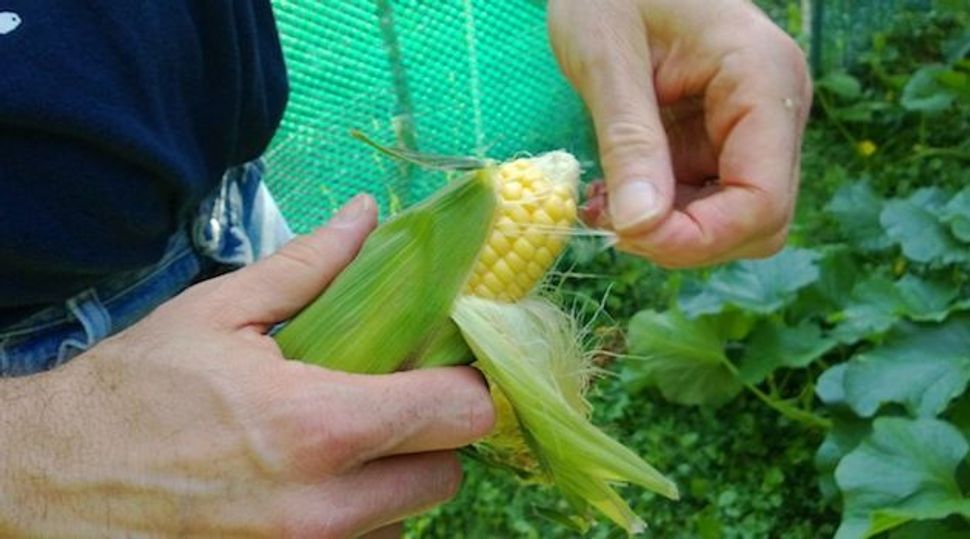 As far as we are concerned, the corn we get from our share is by far the best corn we can get–and we take our corn very seriously indeed. It is literally picked the day before and we’ve learned to cook it that very night (Saturday) for the best taste. We don’t even need to put any butter on it at all. It is that sweet.

The sweetness of the corn is actually the reason we are members of the CSA program in the first place. We had shopped at the Herrcastle Farm booth for years at the Glenside Farmers‘ Market. Over time, we noticed that we really, really liked the corn. We would even be sure to get to the booth before the corn sold out, usually before 11:00 am. At the same time, we were noticing how fresh and tasty all of Herrcastle’s other vegetables were. We became friends with Ed and Judy (and their son, Matt) and had numerous conversations with them over the years about how they grew their produce. We also noticed that the crowd around the Herrcastle booth was the largest at the market. So they were obviously doing something right.

We knew about their CSA, but we were afraid of it because we thought it would be too much food for just two people. One year we decided to ask how much food it was. The answer was “good for two people for a week”. THAT we could do. We now look forward not only to the CSA in the summertime, but even to the annual letter in February which means that the CSA is on the horizon, and that the winter will end–eventually. The winter of 2014 needed a lot of encouragement to end. Maybe sending the CSA check helped spring supplant winter a little sooner.

But the winter did end, and our CSA season is now in full swing. We really enjoy the vegetables. Our CSA is essentially a subscription service, where we go to the market and pick up our bag of veggies (plus a fruit and an herb). Some weeks the bag is pre-packed; other weeks we can select 8 veggies, a fruit, and an herb. If we buy anything extra, we get 10% off. We can also bypass the usual long regular line for a special CSA area. This is a significant benefit because the farm we buy from almost always has the longest line at the market, so the special CSA area saves us lots of time.

One big element of the CSA is the element of surprise. In the beginning, this took more than a little getting used to. Not getting a CSA share until Saturday means that it is very difficult to pre-plan meals for Saturday night and beyond–especially for a vegetarian house. Plus there is the distinct possibility that we will get a vegetable that we have no idea what to do with. This happened the first time we got kale.

With corn, on the contrary, we have always known what to do with it. This year, our son had a new idea of what to do with corn–grow it. I dutifully cleaned some space in the garden for his corn (he thinks he owns it). He was thrilled that we have been able to harvest our first corn.. We are lucky to now have our own fresh corn, because the corn from the CSA share rarely lasts more than 24 hours. For the weeks that we do not get Mr. Matt’s corn in the CSA share, we can now go to the garden for the corn we need to make our Saturday dinners complete.

Len Zangwill is a blogger keenly interested in good fresh food and different aspects of sustainability, He blogs at www.sustainablewritings.com. He lives in the Philadelphia area with his wife and son.