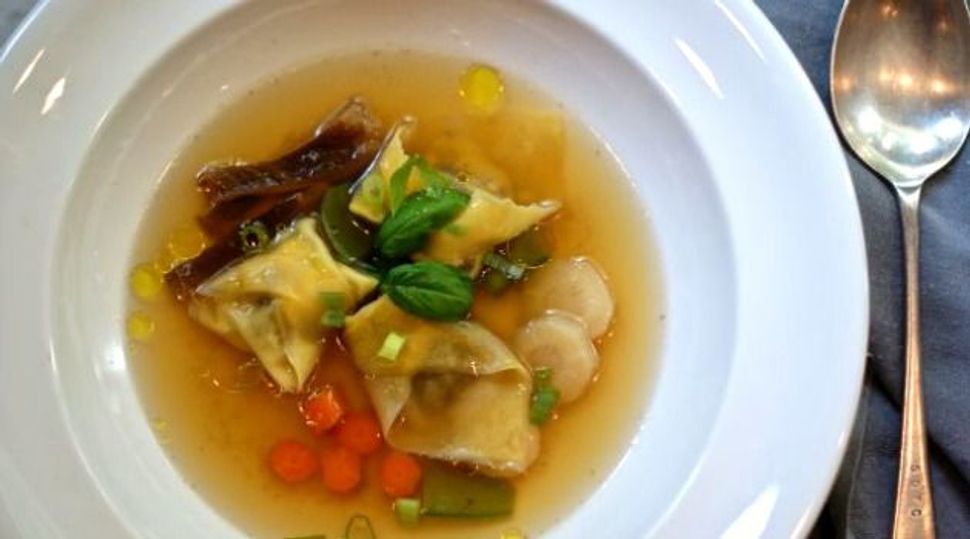 You could always tell the time of year by looking at my Polish grandmother Rachel’s chicken soup: If it was served with bubelach (egg pancakes) or home made lokshen (she used to fry dozens of thin omelets and slice them, very very slowly, to thin lokshen) you knew it was Passover. Kneidlach were served on just any Shabbat, and kreplach, chicken liver filled dumplings, were saved for the high holidays.

Kreplach involve a lot of work, kneading and rolling the dough, making the stuffing and shaping each dumpling. My grandmother did not believe in short-cuts and the kreplach were served only a few times a year. “We’ve been waiting for this a whole year!” she used to say in her almost perfect Hebrew.

But I’m lazy. I do make kibbeh soups, but kreplach seemed too much. Then I found the wonton wrappers, which are available in every Asian grocery store across the U.S. These come in a square or round shape, just the right size for kreplach. They’re easy to fold, fill and shape, and the wrappers are thin and let the filling take the lead.

To match the Chinese theme of the kreplach-dumplings I made a pho-inspired chicken soup. Pho is a wonderful aromatic Vietnamese soup; it is beef-based and spiced with star anise and cinnamon. The version below is a nod to the Vietnamese soup and the Polish tradition.

You can make the soup up to three days in advance, and the dumplings a day in advance.

Wonton wrappers (dumpling wrappers) are available in the fridge or freezers of any Asian supermarket.

For the dried mushroom you can use any variety, including those found in the Asian markets (do not use porcini though, their strong flavor will overpower the soup).

Star anise is available in some health supermarkets, and in any Asian market.

To kasher the chicken livers use one of the methods described here.