Rose Levy Beranbaum Is Back With a New ‘Bible’ 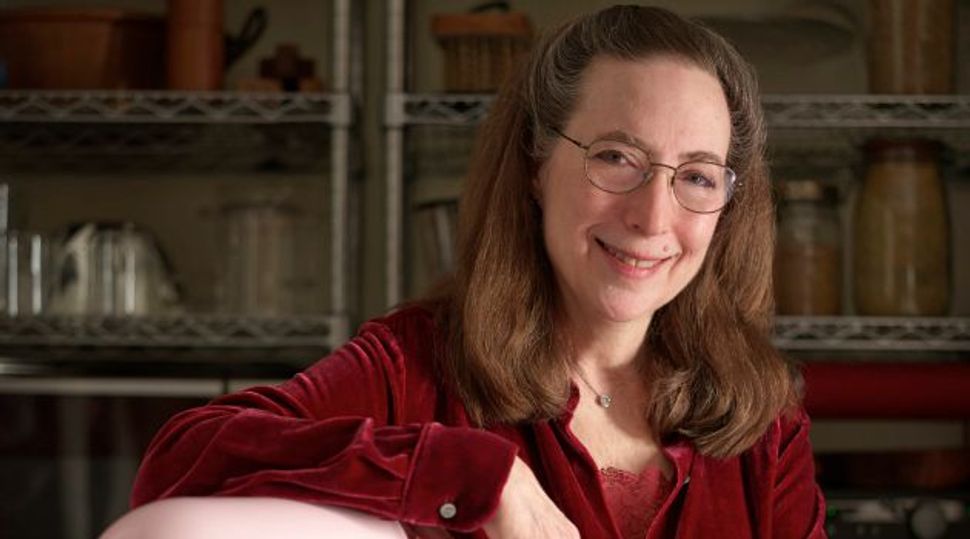 The first time I met the magnificent baker and cookbook author Rose Levy Beranbaum, she brought me a baggie of bread. It wasn’t long after 9/11, and Beranbaum was baking like mad, developing recipes for “The Bread Bible,” which would be published in the fall of 2003. I remember sitting together in a rather formal Midtown Manhattan restaurant, both of us rattled by recent events, and how immediately warm and funny Beranbaum was, opening the plastic bag and handing me slices to taste. I interviewed her at length for the article I was writing, and by the end of our meal I felt like we were old friends. I imagine most people come away feeling that way when they meet her.

Beranbaum’s books are a different story. They’re utterly exacting, relentlessly precise. Her recipes work because she leaves nothing to the reader’s imagination. And this has been a recipe for success. This fall, Houghton Mifflin Harcourt is publishing Beranbaum’s 10th cookbook, “The Baking Bible.” The author already won the International Association of Culinary Professionals Cookbook of the Year awards for both “The Cake Bible” and “Rose’s Heavenly Cakes,” and a James Beard Foundation Award for “Rose’s Christmas Cookies” — which, by the way, includes a fabulous rugelach recipe. “The Bread Bible” was a Publishers Weekly top ten book of the year.

Liza Schoenfein: We first met during a dark period in history, and you were madly baking bread. It’s so good to talk to you a lucky 13 years later, almost to the day.

Rose Levy Beranbaum: “The Bread Bible” was born on the date 9/11, in 2003, and it made me feel better about that horrible number. I was in the process of working on it when we met for lunch. I remember I had a lot of flour and I went through all of it, because baking was the only thing that made me feel better. And baking bread masked the horrible smell. We lived near the Twin Towers site. I remember there was no flour in the stores.

LS: The new book, “The Baking Bible,” feels like such a major undertaking. Not a cake bible, not a pie and pastry bible, but the whole shebang. What made you decide to take this wider approach?

RLB: Well, it was really inevitable, because I had done each subject as completely as I could, there were five or six years between each book, and in that time I traveled and I came up with new ideas, new ways of doing things. So for each different subject — cakes, pies, pastries, breads — I had a lot of new things to share. And people said they wanted a book with the different subjects under one cover. So I thought I would do something called Rose’s Heavenly Baking, and the publisher said no, it really should be “The Baking Bible.” Publishers have a dread of unwieldy, expensive-to-produce books, but since they were confident that this would sell and that it would be a classic, they agreed. When you open it, it lies flat because it’s stitched, so it won’t fall apart and so it’s easier to work with. The paper stock is heavy, so you don’t see through it. It’s gorgeous, but it’s not a coffee table book, it’s a workbook.

LS: Your books are extraordinarily detailed guides. You leave almost nothing to chance. When you say, “scrape down the sides of the cake pan,” you also say what type of knife to use and at what angle the blade should start out. Why don’t all baking books do that? I feel very safe baking with your books, because my questions are answered before I even have them. Is that the intention?

RLB: That’s the center of my heart. That’s exactly who I am; how I feel. But believe it or not, I still get questions from readers.

LS: Why do you offer both weight and volume measures and both standard and metric measures?

RLB: I bake by grams myself. If you bake by ounces, you have to round the numbers. So you would have to use the nearest quarter-ounce. You can imagine how precise you can be with grams. I always weigh my ingredients, but the thing is that I like volume, too, because when I get the measuring cup I want to know what size cup I need. So I don’t want to get out something too big or too small. I didn’t grow up using weight. (In fact, I didn’t grow up baking at all.) So I think it’s useful to give volume. I’d like people to step gracefully and quickly into weighing.

LS: Why “Bible”? What are you conveying with that title? Is there any religious implication at all? How did you originally decide that this would be the name? 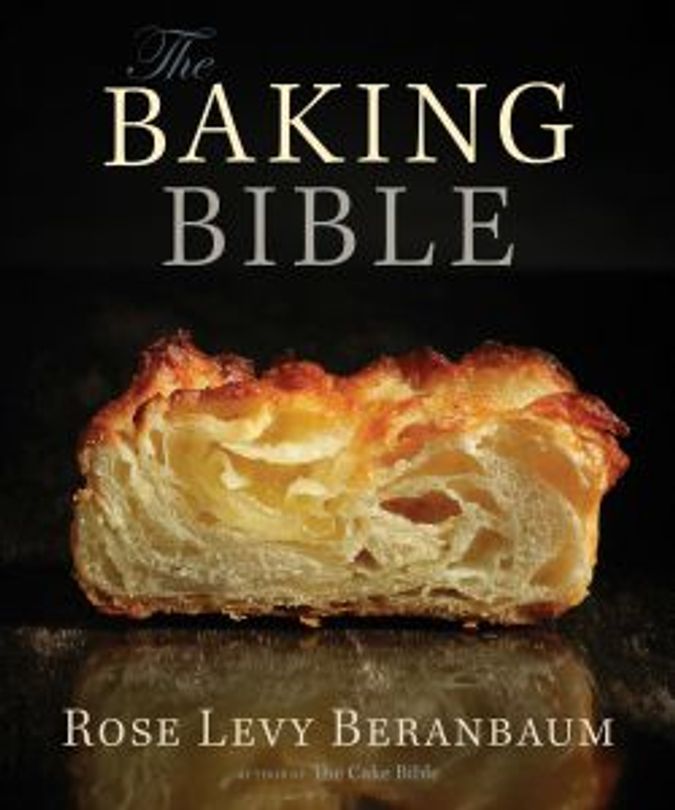 RLB: I originally thought, what a wonderful idea to call a book “The Baking Bible,” because I was being so thorough and complete. Then I thought, I can’t call it the Bible, but my mentor, Bert Greene — he was a food writer who started the first takeout store in Amagansett, New York — called me one day and said, “I have the perfect name for your book: Beranbaum’s Baking Bible!” I wasn’t sure, but my editor said, “Don’t throw out the Bible!” She said she noticed that when she carried this mockup cover with “Bible” on it and people saw it, they stood up a little straighter.

LS: You’ve given us a terrific honey cake recipe. It’s your adaptation of a much-revered recipe by Marcy Goldman, whose books include “A Treasury of Jewish Holiday Baking” (Whitecap Books, 2009). You don’t seem to have been worried about highlighting a fellow baker’s recipe. What was the thought process about the honey cake?

RLB: I don’t love honey cake normally, but when Marcy told me she had one that everyone loved, I said, okay, I’ll give it a try. I made it for my family a few years ago, and everybody wanted to take some home. I find most things too sweet for me, so we made it less sweet. We did special things, like using two stacked baking sheets so it wouldn’t burn, because honey browns more quickly than sugar does.

LS: Let’s talk about honey cake in general. Why is it usually less successful? What is it about this one?

*RLB: It’s the balance of ingredients. It’s having the coffee in it that cuts the sweetness, the whiskey or rye, and my innovation of using some muscovado sugar. The cloves are very intense, so there’s just a tiny little bit.

LS: You have a rugelach recipe in the new book, and you say in the introduction, “If there were just one sweet treat in the world, would that it were rugelach.” Why?

RLB: It has everything going for it. It’s the flaky, delicious crust, it has the tang of the apricot and the raisins, and the butter. I’ll tell you a funny story: When I did the Christmas cookie book and I went to Washington, D.C., for an event in a bookstore there, they had someone at a local bakery make the cookies from the book, and I sat there before people arrived, and without realizing what I was doing I ate almost all of the rugelach.

LS: Are there other specifically Jewish recipes in the book?

RLB: Hamentaschen. People who think they don’t like hamentaschen are just blown away. The problem is that when you buy poppy seeds, they’re almost always rancid. That’s why I give instructions on how to find poppy seeds. People think they’re bitter, but they’re not! And they have to be ground.

LS: We’ll have to print that recipe at Purim. Meanwhile, how about a little history: You said you didn’t grow up baking.

RLB: Not at all. My mother was a dentist. Having grown up without anything that was homemade, I didn’t like eating because she didn’t like cooking. I always had a strongly developed sense of taste, and if I didn’t like something, it was like death having to eat it. I would just rather not eat, and she didn’t force me, but they tried everything. One day my grandmother made an apple pie. And when she made that pie I said, “This I’ll eat.” She knew how to make bread; she grew up in the Old Country in Russia, where she had to. But not when she got to the new world.
When I got to college I tasted my first cake mix. I’d had birthday cakes, but I wasn’t very impressed. I thought, what would be great would be to have cake with the texture of that box mix, but with a more buttery flavor and not so sweet. And that’s what I ultimately achieved with The Cake Bible.

LS: And the rest is biblical baking history.

Rose Levy Beranbaum Is Back With a New ‘Bible’