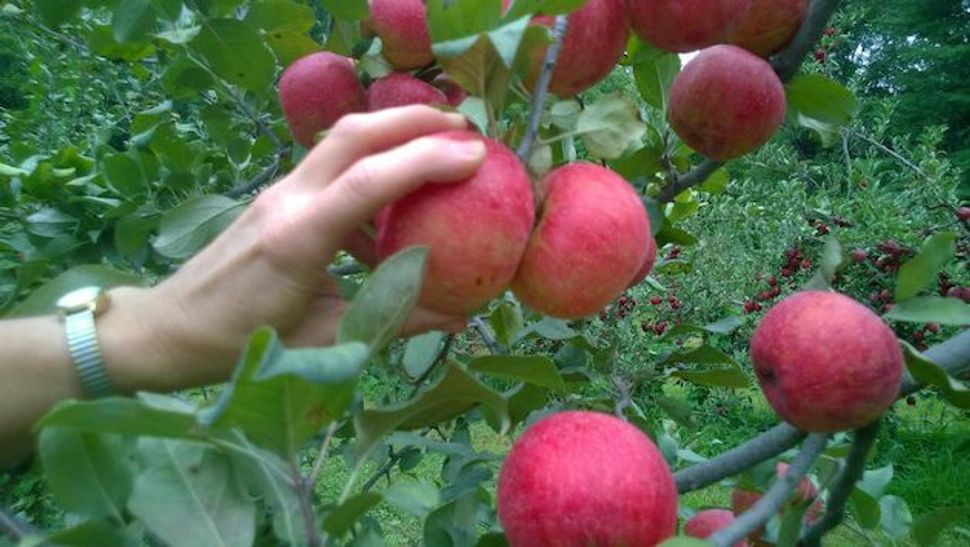 My son decided that he wanted to pick apples so that the family could make applesauce together. He had just read “Apple Days”, by Alison Sarnoff Soffer, the PJ Library book that had taught him how to do it. My wife and I figured it would be a stretch to find any apple variety so early in the season, but since he had the idea to go pick apples it was worth a try. We had actually been waiting for a couple of years for him to grow tall enough to take him to an orchard to pick fruit.

We went to Indian Orchards, a wonderful orchard near Media, Pennsylvania, that my wife and I had found several years ago. We doubted that the orchard would actually have an apple selection so early in the season. To our great surprise, they did. They had Jonathans for applesauce and Honeycrisp for us to eat. While we were there, we decided to pick some Galas as well. This would give us a nice variety to make an apple cobbler or two in addition to the applesauce. (We also found some raspberries, blueberries, blackberries, and peaches on the way to the apples.)

We liked the fact that Indian Orchards is all about growing great tasting fruit in a sustainable way. We actually got an impromptu tour and saw a variety of fruits. It was pretty special to stand with a row of edible Galas on one side and a row of equally edible Honeycrisps on the other. There are really not many things better tasting than fruit directly picked off the tree. We actually got pretty good at picking ripe fruit — the secret is that if the fruit is ripe, it will come right off. If you have to tug, it is not ready yet. After about an hour or so, we had picked about 15-20 pounds of apples, plus several pounds of peaches. We had plenty for the applesauce and cobbler(s).

Our son had very definite ideas on how to make the applesauce. If he were the chef, he would have added ample amounts of cinnamon and honey to make it yummy. However, he was not the chef, Mommy was, and she did not want the extra honey. We cut up about 5 pounds of apples and put them into a big pot to boil down along with some cinnamon. Our son poured in some of the water to make them boil. He had tried to help with the apple peeling, but he and the apple peeler did not get along too well.

He had more success helping with the apple cobbler. He measured the flour and had a grand time rolling the apples in it. Since he is an experienced (junior) baker, he had no problem with getting the proper amounts of sugar, eggs, and butter into the mixing bowl. The parents got the job of mixing the ingredients together and putting them into the baking pan.

We thoroughly enjoyed the applesauce and the cobbler. Even though our son also enjoyed the applesauce and cobbler, he was not finished with his apple adventuring ideas. Rosh Hashanah was coming, so he needed to bake an apple cake. So the night before Rosh Hashanah, he and my wife did just that. It was a fine way to help celebrate the new year. I have a feeling that more apple adventures will be coming to our house this autumn.

Parental version
Peel apples (if skin in applesauce is not wanted)
Fill the pot with apples
Put in a dash of cinnamon
Add about an inch of water
Bring to boil and then let simmer for about a half hour or until applesauce comes to proper consistency.

Len Zangwill is a blogger keenly interested in good fresh food and different aspects of sustainability, He blogs at www.sustainablewritings.com. He lives in the Philadelphia area with his wife and son.