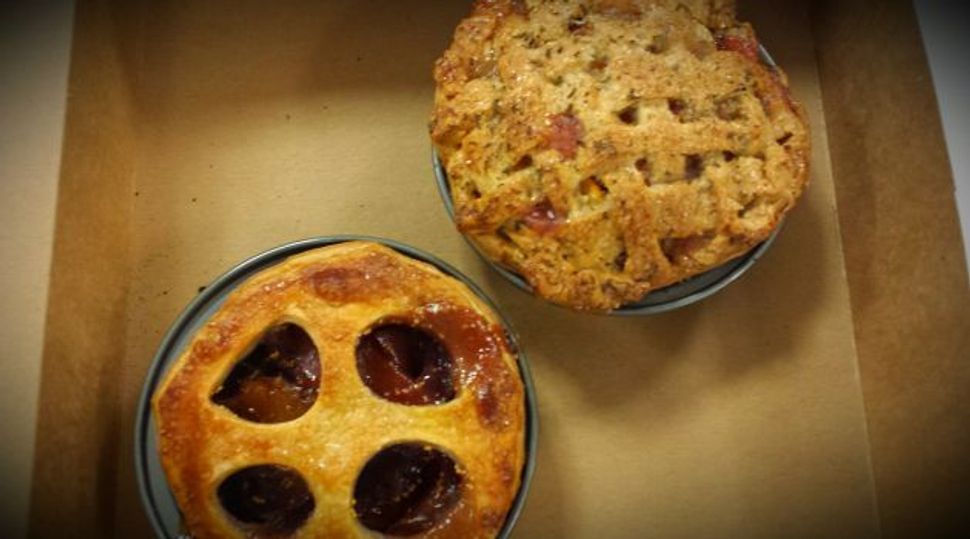 When it comes to a good pie, there are a few important factors that distinguish the edible from the incredible. Starting with the crust, which should be flaky and light but also capable of both standing up to and also complementing whatever goodness makes up the filling. While there are seemingly infinite possibilities when it comes to fillings, finding the right balance of ingredients — most notably, seasonal fruits and herbs — that marry together in a way that will make your mouth water is no easy task. Piety, Brooklyn’s newest kosher pie bakery, rises to the challenge.

Just from speaking to Rebecca Greenberg, founder and owner of Piety, you know she makes good pies. The patience, tenderness and kindness that come naturally to her personality (characteristics that were further developed by previous careers in education and child care), also make their way into her pies. “Baking a pie isn’t fast,” she says. “It takes time, patience and thoughtfulness” — and you know she’s speaking from experience. Crust and filling can make or break a good pie, but it’s these additional qualities that put a good pie over the top.

Having grown up in an orange grove town in California, Rebecca is not only well versed in seasonal ingredients, but inspired by them. As a result of the California school system, in middle school Rebecca found herself at home for a period of several weeks with a copy of the Williams-Sonoma Pies & Tarts cookbook. It was during that time that her love for pies began. Over the years, she’s developed a strong passion for community and for hosting and feeding people. As of early summer, she’s taken the leap from turning pie and people from passion to profession.

Rebecca came by my office on a slow day with three gorgeous looking pies (another important pie factor) — and it didn’t take long after the box was opened and the smell of pie wafted through the vents to pull all of my coworkers out of their offices, forks in hand.

The first pie we tried was a honey-fig-plum pie (pictured above, left). Second only to a fresh fig right off the tree, like the kind I used to eat while farming in Israel, this is the most amazing way to enjoy a fig. The fruits stay true to their shape but release with the sweet temptation of the honey and the heat in the oven. The crust provides just the right amount of savory crunch to balance out the sweetness of the filling creating an amazing morsel.

The second pie we tried was rosemary peach (pictured above, right) — a mind blowing combination of sweet summer fruit and savory winter herb. The pie had gorgeous latticework that almost made too pretty to want to eat (almost!) — but as soon as we did, it was gone in just a few bites. This pie is an extraordinary combination of seasons and flavors. The third pie is creatively called “apple honey thyme”. The flavor is so succulent; it’s like being totally embraced in a hug of fallen leaves, Rosh Hashanah dinner, and apple cider with a cinnamon stick.

Piety pies are available for purchase online and are currently available for delivery in all five boroughs. On October 22, Piety pies will be available for national consumption. Online you will also find a gluten-free pear custard with pistachio coconut crust and an Asian pear anise seed pie, and later this Fall a concord grape and maple pumpkin.

After trying the pies in our office, Hallie Newman says she knew she had to bring one to her family dinner. “The pie was so unbelievably delicious and ordering from Rebecca was such a delight,” she said. Piety pies are kosher, dairy. On the subject of pareve pies, Rebecca says, “pie and butter are b’shert (soul mates).” The next time you’re invited to a meal or are too tired to make dessert, a delicious Piety pie might well be the answer to your prayers.

Liz Traison is an outgoing Program Associate at Hazon. She is a health coach and the founder of Eat the Change, dedicated to helping individuals change the world starting with the tip of their forks. She is also the founder of From Where I Stand, an online presence that captures the narratives of women working in the Jewish community. She is a graduate of The University of Michigan. She also studied at Midreshet Lindenbaum and Hebrew University. She likes being outside, particularly on Skeleton Lake. And also being inside, specifically doing creative workshops in prison.