A Twist on Cholent You’ve Got to Try 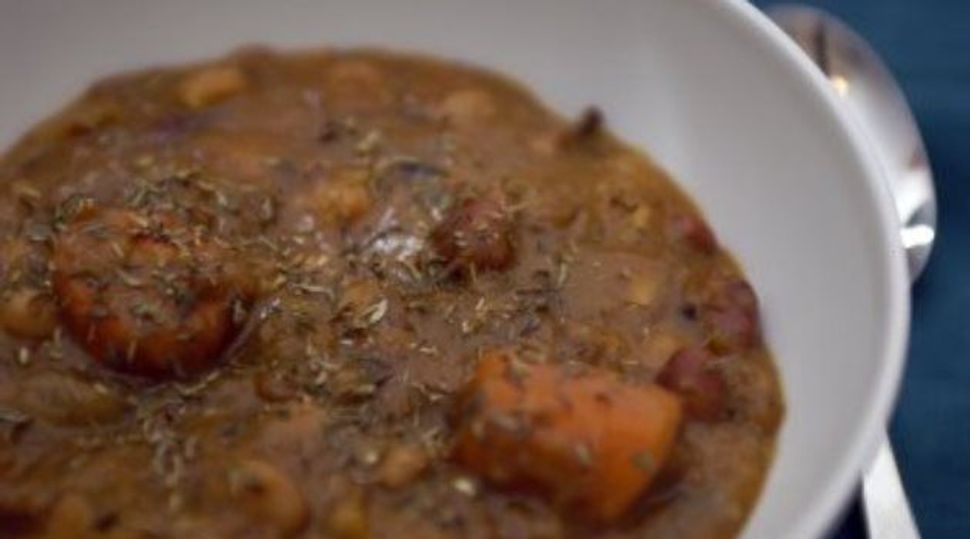 Growing up, there was nothing like waking up on Shabbat morning to the unmistakable smell of cholent cooking in my mother’s extra-large stock pot. Held down by a massive weight (which my mother used to call “the cholent maker,” leading me to believe there was an actual devise that magically worked to churn beef, beans, potatoes and barley into a perfectly cohesive stew), the pot would often threaten to bubble over, spilling drops of rich cholent goodness down the sides.

At times, the smell would be overwhelming, both for better and for worse. But the hardest part was the hour before lunch time, when the anticipation of that perfect amalgamation of spices and substance would take over and my mother’s otherwise reasonably well-behaved children would turn into unrecognizable monsters begging for food.

These days, many people serve cholent weekly as a side dish for Shabbat lunch, offering it in conjunction with chicken, salads and various sides. But in my mother’s kitchen, when cholent was on the menu, it was the only thing on the menu. Furthermore, cholent was something that made an appearance three times a year at most, generally when the weather reached its coldest.

Now that I have my own household and kitchen to run, I take the same approach to cholent: I only make it a few times a year, and when I do, it has to be the star of the meal. And while I’m certainly a fan of my mom’s traditional recipe, I also like to experiment with different variations.

So let’s review the anatomy of cholent. Your basic ingredients consist of beef, potatoes, beans, barley and spices to bump up the flavor. You can adjust the quantities below based on the size of your cooking vessel, but in my kitchen, here’s how basic, unadulterated cholent usually takes shape.

2) Sauté diced onions in 2 tablespoons of oil until golden. Add garlic, cumin, and paprika; sauté for one minute more.

4) Brown your meat using the remaining olive oil; transfer to cholent pot. Pour in half of your potatoes, followed by the beans and barley (no need to pre-soak).

5) Dump in your tomato paste, ketchup, and barbecue sauce; mix thoroughly. Pour in the rest of your potatoes and top with cumin and paprika. Stir the entire mixture thoroughly.

6) Add water — enough to just cover the mixture — and then stir in the salt and pepper. Cover and cook on low for a minimum of 16 hours (mine has gone in a crock pot for up to 24).

Using the basic recipe above, add in the following spices for an Indian kick:

Take the basic recipe but swap kidney beans for dried chickpeas. Then add the following spices:

Warning: This one really packs some heat.

Take the basic recipe but replace 1 cup of kidney beans with a cup of dried black beans. Then add:

Meat-lovers, don’t dismiss this recipe just yet. Yes, this version is vegetarian-friendly, but the abundance of beans and lentils make it a hearty enough meal to satisfy even the most dedicated of carnivores.

Here, you’re going to take the basic recipe but nix the beef entirely and add:

Then add ½ cup of tomato sauce and a touch more ketchup and barbecue sauce to your mixture to compensate for the missing beef that so wonderfully flavors the classic iteration.

No matter which cholent version you choose, just remember the cardinal rule: A meal consisting mostly of cholent must be immediately followed by an extended Shabbat afternoon nap. Plan accordingly, and b’eteavon!

Maurie Backman is a writer and editor who loves to feed others and share her recipes with the world. You can check out some of her sweet concoctions at busybakingmama

A Twist on Cholent You’ve Got to Try