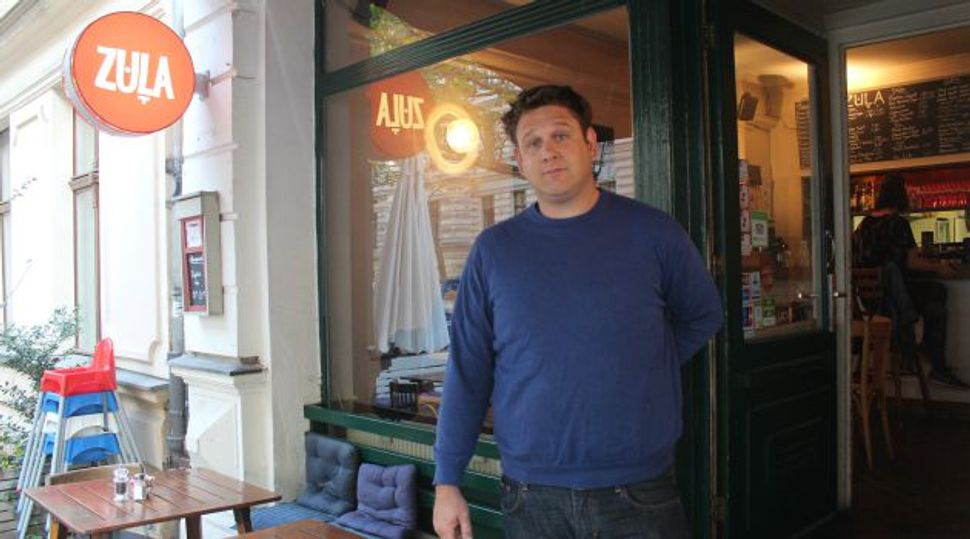 Back in Israel, I used to eat a hummus plate for lunch about three times a week. When I relocated to Berlin this summer, reviving this delicious routine was high on my priority list.

On my third evening in town, while strolling East Berlin’s streets, I saw a restaurant with an inviting name: Zula Hummus Cafe. Zula is Hebrew slang describing a comfortable, relaxing place, and at the time — as I cluelessly searched for an apartment in this huge city, with zero German language skills — that’s exactly what Zula Hummus Cafe was for me. It gave me a feeling of home.

I soon discovered that Zula was just the tip of the chickpea. In fact, Berlin has become a hotbed of hummus entrepreneurship, with joints like Zula, Sababa and Djimalaya popping up in its most popular neighborhoods. Much of the Berlin hummus buzz is — unsurprisingly — connected to the mass immigration of Israelis to the city. The German capital has an estimated 20,000 Israeli-born residents, most of whom have arrived since the beginning of the decade.

Israeli restaurants are not a new phenomenon in the German capital. Nor is hummus, which was brought to the city by its large Arab community. The innovation of Zula, Sababa, Djimalaya and other Israeli-style hummus places is their attempt to import to Berlin a culinary concept that is weird to German eyes and mouths.

“The concept of hummus as a main dish did not exist here,” said Zeev Avrahami, the owner of Sababa, which opened in 2011. ”Hummus here used to come only as a side dish, next to shawarma or falafel. It was never the main part of the meal. … I still have to explain to customers how to wipe the hummus. I tell them they don’t need to eat with a fork.”

The owner of Djimalaya, Ofer Melech, has been involved in hummus businesses in Berlin since 2005. Like Avrahami, he said his first challenge was to convince locals that a plate of hummus, a couple of pitas and pickles is a nutritious and satisfying meal.

“For many locals here, it was like eating mayonnaise as a main dish,” said Melech.

Ofer Melech stands in front of his shop, Djimalaya.

Adaptations had to be made, and first to go was the garlic. Avrahami, Melech and Eran Weinberger, the owner of Zula Hummus Cafe, all minimized the use of garlic in their hummus — unfortunately, I say — in order to please Berliners’ taste. It didn’t end there. Unlike Israeli hummus places, which tend to be informal spots to grab a quick lunch, the Berlin versions actually feel like restaurants.

“They drink red wine with their hummus,” said Weinberger. “In Israel we don’t have such a thing.”

Despite the garlic-less hummus and the red wine, Israel is very present in Zula, Sababa and Djimalaya. Photos of Jerusalem’s Jewish holy spots and Tel Aviv’s beaches decorate the walls, and the menus proudly declare that the kitchen serves Israeli cuisine. At a time when anti-Semitism seems to be on the rise in Germany, and Jews throughout Europe suffer a backlash from Israel’s political actions, these Berlin-based hummus entrepreneurs all use the term “Israeli kitchen” in their marketing.

“People here really love Israelis, they love the Jewish culture. I have never encountered anti-Semitism,” said Weinberger of Zula. “On the contrary, people came to me and said it is great that I opened this place.”

In Jimalaya, even though there are images of the Western Wall overlooking the eaters, the boss’s approach is a bit more reserved.

“People come to eat hummus, to eat shakshuka, to drink lemonade and other natural juices — that combination is very Israeli,” Melech said. “But we don’t go overboard. There are no Israeli flags hanging here. To be Israeli today is to be political. You cannot ignore that.”

The jury is still undecided as to whether “Israel” is positive or negative branding in the heart of modern-day Europe. But the product — my beloved hummus — is definitely gaining popularity in Berlin, just as in other progressive, cosmopolitan cities.

“In the last few years, there is a shift in the gastronomic world,” Melech explained. “People eat less meat, and some people eat only vegan. [A meal of] hummus, tehini and salads is a perfect solution for them.”

Weinberger said the vegan trend has caught on in Berlin more than in other places. “Everybody comes to eat hummus because it is vegan and it is filling,” he said.

Each of these three former Israelis has married and created a family in Germany. Their hummus entrepreneurship is not some short-term investment — they are in it for the long run. Berlin is their adopted home, as it is for me. I am thankful they are here and will be visiting their restaurants. Often.