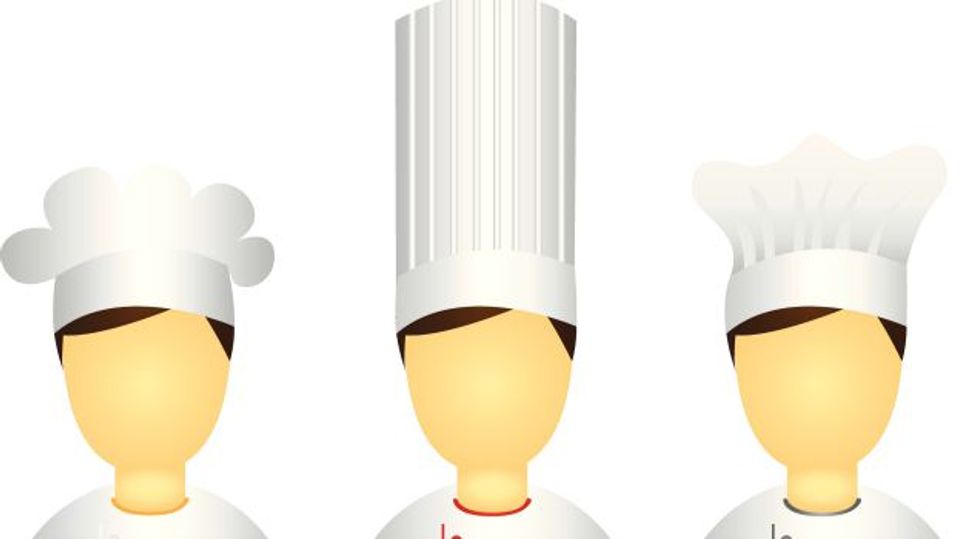 My in-laws and I are in the middle of an all-out competition, a head-to-head contest that has been raging for years, since my husband and I started dating. What are we competing over? Culinary supremacy.

They’re winning handily, and they don’t even know it. In fact, they’d be shocked to know that we’re in competition at all.

Let me explain: I love cooking. Not the weekday-evening frenzy of putting food on the table in a hurry — when I lived alone, I subsisted on a steady diet of omelets and pita-bread pizzas. What I love is the kind of cooking that precedes a holiday or a big family meal. The kind that requires spending hours upon hours in the kitchen with my mom, catching up on every little thing that’s going on in our lives as we chop, dice, whip and stir, my brother and my dad stopping in to help, to hang out and to taste the food-in-progress. There’s a looming deadline, but it’s energizing, rather than stressful.

Sometimes we try out new recipes, but mostly we cook staples — the well-loved dishes that we know our family and friends are looking forward to. For me, it’s not Passover unless there’s a carrot-raisin tsimmes. For my dad, Thanksgiving absolutely must include marshmallow-topped yams. Our cousins devour my mom’s flourless chocolate roll, the centerpiece dessert at every seder. We know our audience, and we cook to please them.

Well, we knew our audience.

Enter my husband, an official member of the family for just about a year. He brings to the table not just an additional mouth to feed, but also a completely different frame of reference. For him, my mom’s beloved chocolate roll is just a chocolate roll. It’s a dessert — and a subpar one at that, since it is neither pumpkin-flavored, nor cheesecake. For him, it has no baked-in nostalgia; it doesn’t remind him of a lifetime’s worth of holidays spent around the table with loved ones, telling and retelling familiar stories and jokes.

We grew up just over an hour apart, both on the fringes of New York City. But when it comes to food, my husband and I grew up in different worlds. It’s partly due to differences in religious observance between our two families — cheesecake on Shavuous is a given, when you celebrate Shavuous — but it’s mostly a matter of the subjectivities of taste.

Where my mother-in-law makes a tasty chicken in a tangy-sweet sauce, one of my sisters-in-law is famous for her sweet challah topped with sugary crumbles and the other makes a cran-apple kugel that’s essentially a cobbler masquerading as a side dish, I grew up in a kitchen that relied heavily on the “Moosewood Cookbook” and relegated every last bit of sugar to dessert. (The annual appearance of marshmallow-topped yams notwithstanding.) In some cases, I cannot account for my family’s culinary peculiarities — we never once had homemade pumpkin pie on Thanksgiving, for instance. In other cases, it’s the foods my husband takes for granted that I cannot explain. (What exactly is the point of a deli roll, anyway?)

And so, after years of knowing exactly how to cook to the crowd, I’m stumped. As I struggle to add something to our blended holiday table that makes my husband just as physically and emotionally sated as everyone else, it’s nearly impossible not to weigh my offerings against the food he grew up with. My cheesecakes aren’t as light and fluffy; my challah not as sweet; my pumpkin pies entirely subpar. Even if my husband doesn’t say it, I know it. Which is why it feels like I’ve stumbled into a one-sided cooking competition with my in-laws, where every dish that I put on the table is pitted against theirs in a game of “Who made it better?”

My mother- and sisters-in-law are besting me without even trying. They don’t even know we’re competing. Probably because we shouldn’t be, but I’m not the first wife to feel like she’s trapped in a perpetual cooking contest. There are reality TV shows around the world based on this very concept, pitting wives and mothers-in-law against each other in a quest for culinary domination. Nonetheless, it feels petty. It drives me crazy that I care at all. It’s silly. It’s just food. And yet…

When there’s something tasty on the table, it can change the entire tenor of a meal. In Judaism, food is rich with symbolism. Apples and honey on Rosh Hashanah. Latkes on Hannukah. Matzo on Passover. What we eat reminds us of where we’ve come from, of our shared culture and tradition. Even Yom Kippur, a holiday famously (or infamously) predicated on the absence of food, has its own culinary conventions — I’d bet most families have their own customary pre-fast meal, or their own break-fast traditions. Food is about so much more than sustenance, and plays such a central role in my experience of family and holidays, that I can’t bear to think that my own offerings to our new family table may not be up to the task.

Of course, it begs the question, “Why me?” The notion that the burden is on me not just to cook, but to cater to the vicissitudes of my husband’s taste buds is embarrassingly archaic, harkening back to the idea that the way to a man’s heart is through his stomach. (I should note, lest it sound like I only cook what he likes, that I serve up more than my fair share of semi-experimental dishes, executed to varying degrees of success; and he knows that if he wants steak, he better make it himself because I don’t yet have the mettle to handle raw red meat.)

When we first started dating, I barely ever cooked at all, so determined was I to ensure that we would not default to traditional gender roles. But I couldn’t escape that one simple fact: I like cooking. Why should I keep myself from something I enjoy, on principle?

Which brings me back to where I started: in the kitchen, attempting to keep my chicken soup at a simmer, not a boil, so the broth stays clear and full-bodied. I’ve accepted that I’m going to be doing most of the cooking, and the perfectionist in me won’t let me stop trying to do it better. After all, half the fun of it is watching people enjoy eating what you’ve made. So I won’t stop cooking for my audience, trying to serve up meals that I know will make my husband and our friends and family smile. But it’s time to change my strategy, to stop turning cooking into a competition I can’t win. There’s enough space for everyone’s food on the table. Rather than vainly trying to replicate my in-laws’ tried-and-true recipes, it’s time for me to start offering up some of my own — to turn my attention to making new contributions to our two families’ shared culinary tradition.

For the most part.

Because cheesecakes will drive me crazy until I figure out how to magic those dense bricks of cream cheese into cloud-like little bites of sweetened fluff.