Exploring the Pickle’s Storied Past 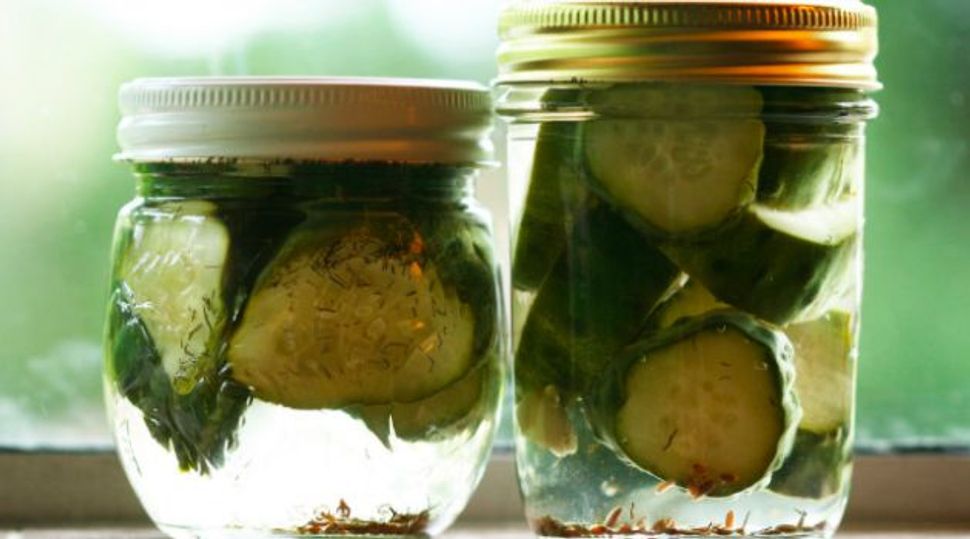 November 14 is Aaron Copland’s birthday. It’s the day that Chicago Bears’ quarterback Sid Luckman passed for seven touchdowns to help defeat the New York Giants 56 to 7 in 1943. And it’s the day Ivan Boesky confessed to illegal market activity in 1986.

But for readers of The Jew and the Carrot, November 14 has even greater significance: It’s National Pickle Day.

Pickles, of course, aren’t exclusively Jewish. They date back thousands of years, appearing as far as India and Egypt. But over the centuries, pickles became a staple food for Ashkenazi Jews. Pickled vegetables were a dietary staple for Jews living in the Ukraine, Poland, Lithuania and Russia, as Claudia Roden explains in “The Book of Jewish Food”: “The sharp flavor of pickles proved a welcome addition to the bland bread-and-potato diet of these cold-weather countries.”

There’s also a darker connection between Jews and pickles, according to Jane Ziegelman, director of the culinary program at New York City’s Tenement Museum and author of “97 Orchard: An Edible History of Five Immigrant Families in One New York Tenement.”

“Non-Jews in the early 20th century had a violent reaction I still don’t understand against pickles favored by Jewish immigrants,” Ziegelman told the Forward. “They identified the pickle with everything that was wrong with immigrant food ways and cooking.”

“Pickles were seen as stimulants because they were so garlicky, sour, vinegary and strongly flavored, which in turn created other bodily cravings,” Ziegelman explained. “And when children ate pickles, [it was thought that] they set themselves on a dangerous path in which they would require stronger and stronger flavors until food would no longer answer those cravings.”

Caffeine would come next, then alcohol, “then who knows,” Ziegelman said. “Pickles were a gateway drug, essentially, to a world of caffeine and opiates. There was a kind of insanity surrounding pickles.” Think of it as a fermented version of Reefer Madness.

Though those associations have faded, picklers of the past do have quite a bit in common with modern artisan pickle businesses that have been popping up as part of the nouveau-Jewish food wave of the last few years.

“In a way, our immigrant ancestors were all start-up businesspeople,” she said. “They operated in found space, just like people do today — [artisan purveyor] [Brooklyn Brine]4 started in someone else’s restaurant. Pickle vendors back then started in tenement apartments; the kitchen would become a pickle factory while the family was out.”

Venerable Brooklyn picklers Batampte — “one of the great old pickle families,” Ziegelman said — started selling pickles out of a hosiery store on the Lower East Side, she explained.

“Again, it’s the idea of finding space, sharing it, cobbling together a livelihood. To me, that’s the strongest connection between pickles then and now. It’s more cultural, social and economic than culinary, though many of today’s picklemakers are using the same fermenting techniques used by our forebears.”

In honor of National Pickle Day, the Forward has been marinating some fun facts about our favorite fermented food. Click here for 7 delicious pieces of pickle trivia.

Exploring the Pickle’s Storied Past