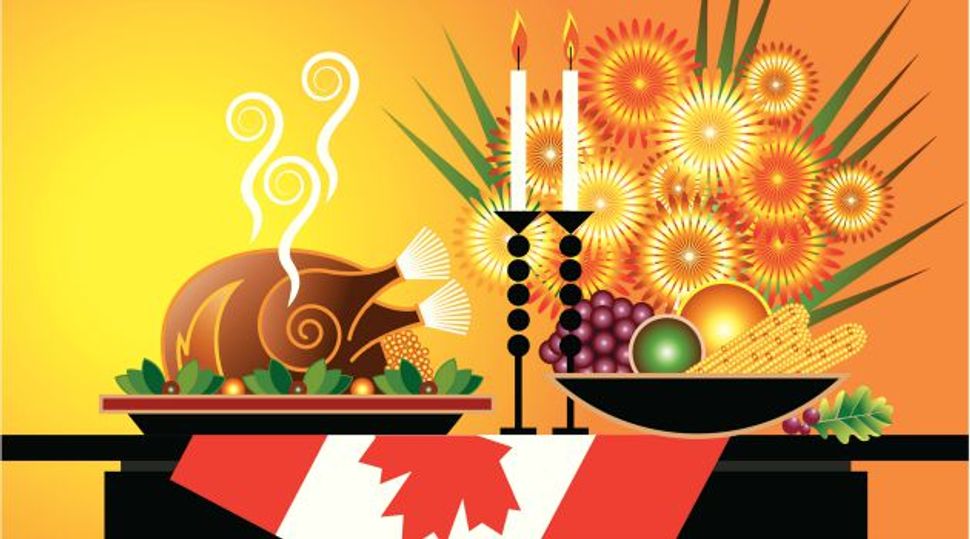 Growing up in Montreal and Toronto respectively, neither my husband nor I celebrated Canadian Thanksgiving. According to my parents, it was a Christian holiday. In my imagination, Thanksgiving encouraged families of scrubbed-faced pale-haired Christians across the country to sit around their hand-sawn and sanded wood tables under a big similarly homemade cross and say thank you to Jesus for their bounty.

In reality, Thanksgiving in Canada, as in America, is a harvest holiday, but it’s held more than a month earlier (it was pushed back from November to October in 1957 as not to clash with Armistice Day), and it seems to me the reason so few Canadian Jews celebrate Canadian Thanksgiving is because of the terrible timing. Canadian Thanksgiving, almost without fail, lands on Yom Kippur, between Yom Kippur and Sukkot, or on Sukkot. Trying to add another holiday during the early-fall calendar of Jewish holidays is not only chaotic, it can be a straight-up conflict (fasting and turkey-eating simply do not go hand-in-hand).

After moving to the United States in our early twenties, we adopted American Thanksgiving, a tradition that was cemented with the birth of our American son. I learned to roast a turkey, cook cranberry sauce and bake pumpkin pie. Sure, with the late-November date we had a conflation of holidays from the American and Jewish calendars last year — but nobody is going to complain about the awesome hybrid results of Thanksgivukah: sweet potato pancakes and pumpkin kugels and cranberry-sauce-filled sufganiyot.

This year, we moved to Britain, which, curiously, seems to celebrate Black Friday without much mention of the preceding Thursday. We waffled about celebrating a holiday that wasn’t really ours in a country that didn’t really recognize it. In the end, we decided we didn’t want to give up a tradition we had come to enjoy. Also, our American son, though doing an excellent job of picking up the local loves (like football and “Doctor Who”) and lingo (“Mom, can you wash my gray jumper? And no putting it in the rubbish bin because I’ve torn it!”), has become quite emphatic about his patriotism (“colour,” he wrote on his spelling test, loathe to get the answer wrong, but then he added, in parentheses, “British,” and, a few finger spaces after that, “color ← AMERICAN!,” preserving his own sense of correctness).

Happily, with a few translations from English to English (turns out “squash” in the U.K. is a syrup added to drinks, not the gourd; “marrow” is what we call squash; “mange tout” is the term for snow peas; “aubergine” for eggplant; “courgettes” for zucchini — and the list goes on and on), I managed to pull together a fairly traditional menu. I found some American friends and some sort-of-American friends (do South Americans count?) to invite to our home.

I surfed Netflix and discovered “Free Birds” is currently playing (which means we can kick out the kids and have a little space at the table after they declare themselves full after soup). And, without the pressing need to hold Thanksgiving dinner on Thanksgiving itself, I moved dinner to Friday night, which is a lot easier for everyone, since the workweek is a normal one. So, in fact, our British-Canadian-American Thanksgiving dinner will be Shabbat dinner, which is perfect, because the idea of cooking a whole multi-course meal the night after Thanksgiving has never been appealing to me.

Karen E. H. Skinazi, PhD, is a cultural and literary critic. A Torontonian through birth, New Yorker at heart and Brummie by residence, she leads a vagabond life with her scientist-husband and three rowdy boys.