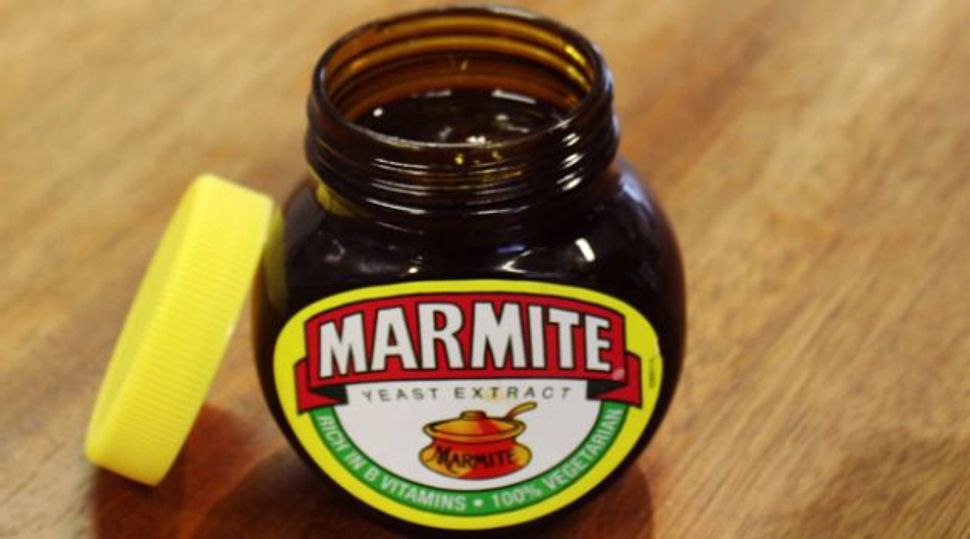 It was certainly one of the stranger Jewish conversations I have had. (Mind you, I have had many.) There I was in Oxford after a hearty Sabbath lunch, walking in the beauty of Christ Church Meadow, chatting with a new friend about food. At a moment, he turned to me and said, “You said you’re South African, right?”

And then he explained to me a great British Jewish saga. Marmite — that constant, ever-British (and delicious) condiment — was not kosher-certified by the British rabbinical authorities, despite its “suitability for a kosher diet.” That is, as manufactured in Britain! However, the South African version is certified, and until recently, was readily available at South African and Jewish shops across the United Kingdom. But then the British manufacturer decided to enforce its brand monopoly — and the South African — and kosher — Marmite was gone!

“So, next time you’re in South Africa, could you bring me a few jars of Marmite please?”

I did not necessarily consent to illegal activity. However, I did have a brainwave.

What can one jar of Marmite tell us about how Jews deal with diaspora?

Let us start by discussing what “diaspora” is — and how it operates. As classically (though nebulously) defined, the Jewish diaspora would describe the collective of the Jewish people as scattered around the world — not just in terms of being scattered from the Holy Land in 70 AD or not being in Israel today, but how we Jews here in England are separated geographically and slightly culturally from those of us in America, South Africa, Suriname or Manila.

However, we are bounded by an imagined community comprised of Jews. That is not to say a Jewish community does not exist, but rather that it is strongly influenced by an (often romanticized and simplified) idea of a common Jewish world. These ideas permeate our everyday existence as Jews — and I will use Marmite to explain how.

Our little jar of Marmite is a wonderful illustration of how diaspora members — in this case, Jews — developed a habit of transnational living even in a seemingly most British context. Firstly, there is the idea that there is a kosher option from abroad — even if there is not one at home. The British version has no hechsher? No problem, we will import the South African one instead: Jews there eat Marmite too, and though they are six thousand kilometers away, they are still like us. Secondly, food consumption habits are seen beyond borders or what is locally available: rather, the idea of a kosher world — with kosher Marmite! — is created. Thirdly, the common language of halakha (though contested and debatable) around kashrut helps re-create this common idea of a single, kosher diet that does not change between the nodes of the Jewish diaspora. Though this is highly problematic and contested, and folks are often excluded for dangerous reasons, one could say that these (varied) standards of acceptability guarantee membership in the diaspora — and trading power within. Our little jar of Marmite is thus representative of how halakha operates and is reconstituted across borders. (Yes, reconstituted. For discussions of how people shape a living halakha, go to this New Voices contributor’s work.)

South African Marmite also tells us something about the economic connections forged by diaspora. Firstly, there was — before the ban — enough of a desire for South African Marmite by Jews seeking the kosher product for wholesalers to buy Marmite from South Africa, and, in a modern-day shipment of coals to Newcastle, bring it to the United Kingdom for sale. From this fact, we get a clue of how diaspora groups — both Jewish and South African here — create markets and sustain certain forms of trade. Secondly, the Jewish diaspora to an extent forms another type of unified market. The customer base for kosher food is not then necessarily bounded by national borders, but rather on another plane of community. In addition, the methods by which our jar of Marmite is sold and resold — in kosher markets and by wholesalers — gives a hint to the economies that have grown up around diaspora communities — traditional or non-traditional.

Finally, let us please note that we are talking about Jews eating Marmite — the quintessential condiment of the Commonwealth. Underneath all of the concerns and scaremongering about assimilation (and attempts at various levels of sexiness to counter it), Jews across the world integrate into many of the norms of their host communities. One could say then that different places of integration create common norms that are not “Jewish,” but still play out in a Jewish context. Thus South African and British Jews alike might want to eat Marmite at breakfast — and they share that commonality — but not with other Jews. But also this integration shows that Jews are also members of other communities — be it “the imperial diaspora” of Britain’s settler communities or “Englishness,” or…whatever, really. Marmite reminds us that being in diaspora is never an isolated experience.

Diaspora is a lived experience; Marmite is one apt, if unusual, illustration of this fact. From it, we can understand how Jews relate to diaspora, live in diaspora, form connections through it — and at the same time integrate it into other ways of life. But from here, I encourage you — yes, you — to think about how diaspora is played out in your everyday life. What can a food you eat or a way you decorate your house say about the way you relate to other Jews — or any ethnic or national group you are a part of? (I assume most New Voices readers are Jews, but I also know many are not.) You don’t have to do what I have done academically and dedicate your life to examining migration and diaspora, but I do think it is a healthy and fascinating exercise.

And when you’re finished, make yourself some toast — with (kosher South African) Marmite, of course.

Jonathan P. Katz is an American student at Oxford. This article first appeared in New Voices.