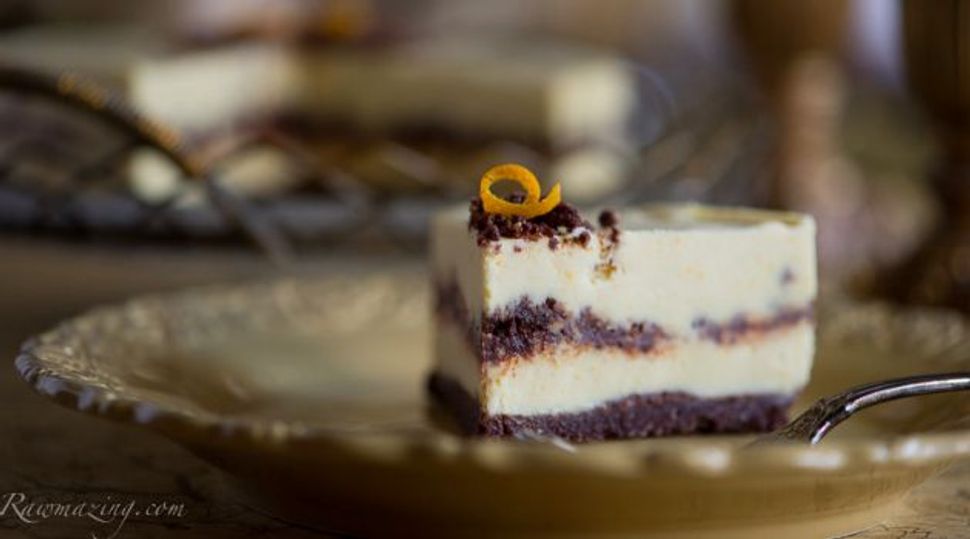 My first foray into the healthful and delicious world of raw desserts began seven years ago when I was making a sheva brachot (seven blessings) dinner for a friend who had gotten married two days earlier. As Murphy’s Law predicted, my oven and stove died the morning of the big event.

While I prepared most of the dinner on the grill, I was stumped by the challenge of what to make for dessert.

Like a “Top Chef” quick-fire contest with crazy requirements, the final course had to be non-dairy and made without an oven or stovetop.

I had a lot of fresh fruit on hand because, originally, I was going to make mini peach-blueberry crumbles. I halved and pitted the peaches and soaked them in sweet wine and spices. As they macerated, I processed cashews in the blender with a little bit of water, maple syrup and vanilla bean to create a decadent cashew crème.

I served the plumped, spiced peaches with a spoonful of cashew crème, a sprinkle of crushed, caramelized nuts and a garnish of blueberries. While the addition of the sweetened nuts was not technically “raw,” I was thrilled to serve a tasty, non-dairy dessert that didn’t rely on Rich’s Whip or Toffuti cream cheese.

Since this experience, even when my stove and oven are working, I often make raw desserts.

This style of sweet ending is based on nuts or coconut, which create all-natural, creamy, dairy-like consistencies, perfect for a health-minded kosher cook who wants to end a meat-based meal sans processed parve ingredients.

As I delved into this repertoire, my pantry expanded.

Nuts are the jack-of-all-trades in raw desserts. They can be chopped, crushed, blended or used whole. I turn them into nut butters and nut milks to give that creamy, smooth, buttery consistency often found in dairy desserts. High-quality plant oils and butters also play an important role in raw desserts. This includes coconut oil, raw extra virgin olive oil, coconut butter (which is creamy paste made from dried, ground coconut meat), nut butters and tahini.

Even raw desserts call for sweetness. Unrefined favorites include fresh or dried fruit, Medjool dates, coconut nectar, coconut sugar, stevia or maple syrup. Maple syrup, the boiled sap of maple trees, is technically not “raw,” but I often use this minimally processed sweetener, which contains minerals like manganese and zinc, and has a distinct, irreplaceable taste.

With Chanukah on the horizon, I’m using an array of these natural ingredients to make non-dairy, raw desserts that are a fitting end to a healthful holiday meal.

Creamy cashews, blended with fresh orange and ginger zest, star in an orange-chocolate “cheese” cake. Apples dressed in a creamy Medjool-date sauce mimic a traditional fall pie in deep-dish caramel-apple pie. Fruit-and-nut snowballs, which feature dried fruit, shredded coconut and hazelnuts, are a perfect winter treat when fresh fruit is hard to find. That recipe is below.

1) In a food processor or personal blender such as the Nutribullet, process the coconut until finely shredded. Remove 1/3 cup. Set aside.

3) Remove with slightly damp hands and divide into 12 small balls.

4) Roll each one into the reserved finely shredded coconut until thoroughly coated. Store in an airtight container.