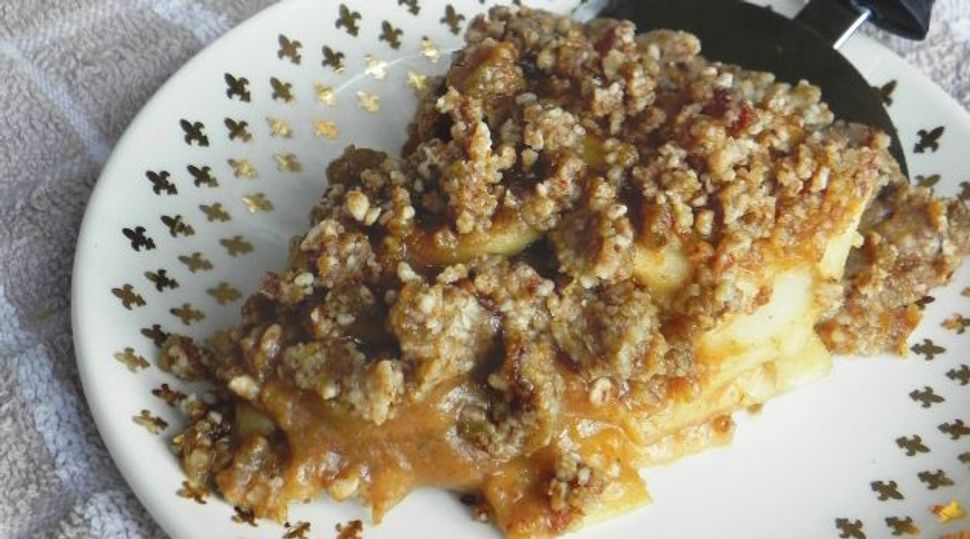 Picture it: a tender, nutty crust and crumble topping, surrounding caramel-coated apple slices kissed with cinnamon, all gently warmed in the dehydrator or oven. In other words, autumnal heaven. That is this pie. Photograph by Amber Shea Crawley

For the crust and topping:

For the caramel sauce:

To make the crust:

1) Combine the almonds, walnuts, pecans and salt in a food processor and pulse until the nuts are finely ground. Add the raisins, ¼ cup at a time, pulsing in between additions until well-incorporated. Add the dates and pulse until the mixture is sticky but still crumbly. Measure out 1 cup of the crust mixture and set it aside.

2) Transfer the remaining crust mixture to a deep-dish 9-inch pie plate (lined with parchment paper for easy removal, if desired). Press the mixture thinly, firmly and evenly onto the sides and bottom of the pan. Set aside the pan while you make the sauce and filling.

To make the caramel sauce:

Combine all the ingredients in a high-speed blender or food processor and blend until smooth. Store in an airtight container in the fridge, up to 3 days.

To make the filling and assemble the pie:

1) Combine the sliced apples with lemon juice and cinnamon in a large bowl and toss to combine. Add the caramel sauce and toss again until the apple slices are coated with the caramel.

2) Transfer the apple mixture, and any extra sauce lingering in the bottom of the bowl, into the reserved crust, arranging the apples and patting them down so they create a flat, even layer.

3) Sprinkle the reserved crumble mixture on top of the apple filling.

4) Dehydrate at 115˚ F for 5-6 hours, until the pie is barely warmed through, or bake in a preheated oven at 250˚F for 20-25 minutes, until warmed throughout, or just refrigerate until ready to serve.

5) To store, wrap snugly in plastic wrap and store in the fridge for up to 3 days.