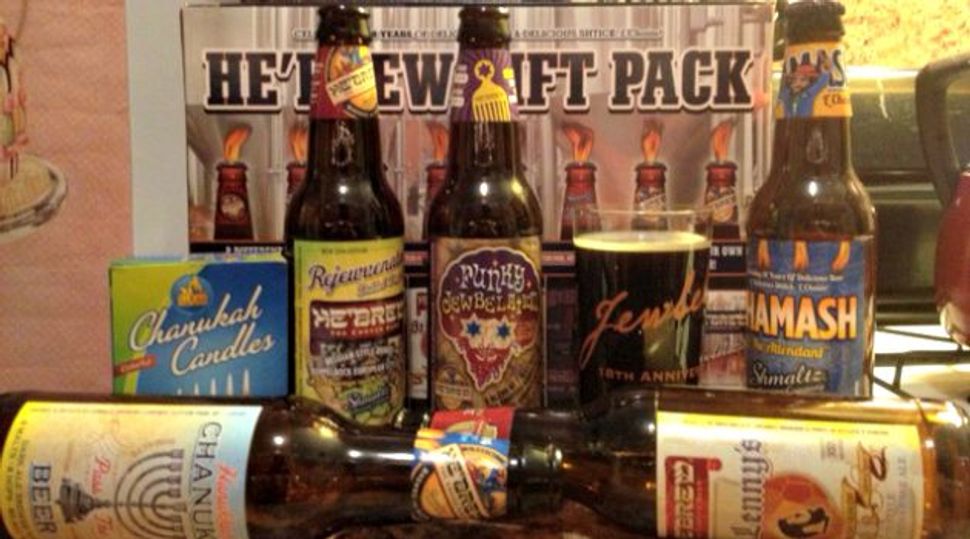 The holiday season is upon us, which for many means a time of social gatherings, family, friends and traditions both religious and secular.

This time of year brings me back to my youth, when I believed December was the time the Jews celebrated Hanukkah as well as Passover — when Santa Claus passed over our house and went to everyone else’s. Were it not for Cecil B. DeMille and his documentary, “The Ten Commandments,” I might still be disillusioned.

Needless to say, as an adult I have no sentimental attachment to any of December’s celebrations, but thanks to Shmaltz Brewing Company, that is all about to change. Because if there’s one tradition I can full invest in, it’s one that involves craft beer.

Shmaltz brews a variety of beers under the brand He’brew “The Chosen Beer” — and come Hanukkah season, it releases the He’brew Gift Pack. The pack consists of eight different beers, a box of candles, a glass and an extra bottle for the shamash. Your job is to drink all the beer and make a menorah out of the empties.

My boyfriend, Jon, was delighted to help with this project and is now fully committed to celebrating Hanukkah. We are drinking our way to our very first menorah. So far, we’ve made it through the Hanukkah, Chanukah: Pass the Beer — a dark ale brewed with (what else) 8 hops and 8 malts. And you guessed it: It’s 8 percent alcohol by volume. I don’t really like hops, so I was surprised that I enjoyed the taste of this beer. Jon gave it an A+ for richness, complexity and humor.

Next up was the Rejewvenator Dubbel Doppel, a Belgian-style dubbel and doppelbock European-style lager, with grape juice added. I was skeptical about the juice, but it contributed a freshness and unexpected lightness to this wholly satisfying beer.

I got home late from work one night to discover that Jon had already imbibed the St. Lenny’s, an “immaculate collaboration between Shmaltz Brewing and Cathedral Square Brewery.” Jon said he was certain that I wouldn’t have liked this Belgian-style double-rye IPA. He thought it was good, and liked that it had the distinct taste of a traditional Belgian beer, but with a heavy dose of hops. He was right: I wouldn’t have liked it.

The Funky Jewbelation has, in my opinion, the best name and logo, but alas the flavor was not for me. A blend of seven ales aged in bourbon and rye barrels, it was I too sweet for my taste — and I wished for more of the bourbon.

As of this writing we have nine days to finish four more beers and make our menorah. It’s a challenge Jon and I will face together. Ah me, the trials I must endure for a story.

P.S. Keep your bottle caps! (You’ll need them for the menorah.)