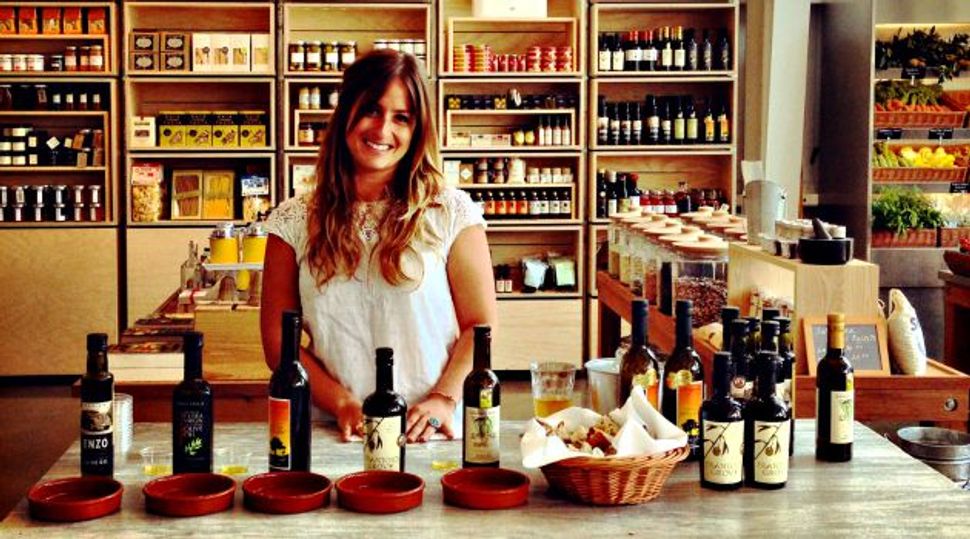 Maia Hirschbein with some of her favorite olive oils. Photograph by Emily Potter

It was in an olive grove in Tuscany that Maia Hirschbein had an epiphany that would determine her future. Already a food lover, she had come to Italy in 2012 to study its food, culture and language, and with no other particular direction, she answered an ad asking for help with the olive harvest.

“I took a train, not knowing where I was going, and met some guy who gave me a room and put me to work,” she said. “I’d wake up early and spend the day raking unripe Tuscan olives off the trees.”

The olives were then brought to the mill, a modern production facility, “and I was able to watch the steps of seeing my fruit milled and transformed before my eyes,” Hirschbein said. “In 30 to 40 minutes, it had turned this bright neon green that smelled incredible, and I thought, ‘How have I never tasted this before? It’s so full of life.’ ”

Hirschbein now works as a contractor for California Olive Ranch, a Chico, California-based company whose rectangular-shaped bottles are widely sold. Her job includes advocating for using locally produced olive oil and teaching people how to taste it, what vocabulary to use, how to cook with it, and what to look for when buying it.

“In every country of the world, using a fat of some kind is a way to increase the deliciousness of your food,” she said, “and olive oil tends to be my personal favorite.”

Hirschbein believes that even though she grew up in a food-centric Jewish family, hers was no different than most: “I grew up on rancid and low-quality olive oil, which is so common here in the U.S.,” she said.

Not anymore. Hirschbein now has her mother, Kathy Beitscher, baking her “legendary challah” with olive oil. Originally from La Mesa, California, a suburb of San Diego, Hirschbein, 31, now lives in Oakland. She grew up in a Conservative Jewish family, attending Jewish day school through sixth grade. Her paternal grandparents were Polish Holocaust survivors and her grandmother made all the Jewish classics.

Hirschbein says as a child she wouldn’t eat her grandmother’s chopped liver, but now chopped liver is one of her favorite foods.

She fondly recalls large Shabbat dinners with her grandparents, and her parents growing a lot of produce in their backyard. Cooking meals and cleaning up the kitchen were major ways her family spent time together.

Now that she is an oleologist (olive oil expert), Hirschbein appreciates how olive oil is a “vein that goes through all my interests, from food to Judaism.”

(Quick aside: According to the Talmud, the olive oil in the Hanukkah story was unadulterated and undefiled, with the seal of the Kohen Gadol, or high priest, needed for the menorah in the Temple).

Hirschbein attended graduate school at the University of Gastronomic Sciences in Italy and thought she would write her master’s thesis comparing the California and Italian olive oil industries. But after finishing her coursework in Italy, she decided to come home and focus on California’s industry, which is formidable in its own right. She drove up and down the state visiting olive farms and meeting producers, many of whom became friends that she still works with today.

While California produces 99 percent of American olive oil (Georgia and Florida produce a tiny amount), Hirschbein said that’s only a tiny drop in the bucket of olive oil produced worldwide — just .01 percent. Up to 60 percent comes from Spain, but much of that is not extra-virgin, is of subpar quality and is exported to other countries including America. Greece and Italy are the next largest producers.

Hirschbein said a lot of what is marketed to American consumers is of questionable quality. “People are misled when it comes to olive oil,” she said. For this reason, she encourages supporting the California industry — and the local-eating ethos. She recommends always having two bottles on hand, a cheaper, “everyday” one for cooking and a more expensive bottle for finishing.

She advises looking for three major qualities when tasting olive oil. The first is fruitiness. “You want it to smell like bananas or fresh cut grass, some characteristic of a fruit or freshness on the nose,” she said.

The second is a degree of bitterness. When you slurp it, you should taste some bitterness, which is a sign of freshness.

The third is pungency, which shows itself with “a tactile sensation in the back of the throat, like a burning,” she said. “That’s a sign that there are antioxidants, which is good, since we want there to be health benefits from the fat we consume.”

When asked whether it’s true that one shouldn’t use olive oil for frying foods with high heat, she answered that it was a myth.

While neutral oils might be a good choice if you don’t want your food to taste like olive oil, olive oil is fine for most applications. “Olive oil starts smoking around 400 degrees, and frying happens at around 350, with the smoke point directly being correlated to the quality,” she said. “If you’re using an old [oil], it will smoke and start burning at a lower temperature.”

Which means that olive oil, provided it’s fresh, is the perfect fat for most deep and shallow frying.

This article first appeared on J. Weekly. Alix Wall is a personal chef in the East Bay and beyond. You can find her website at The Organic Epicure.