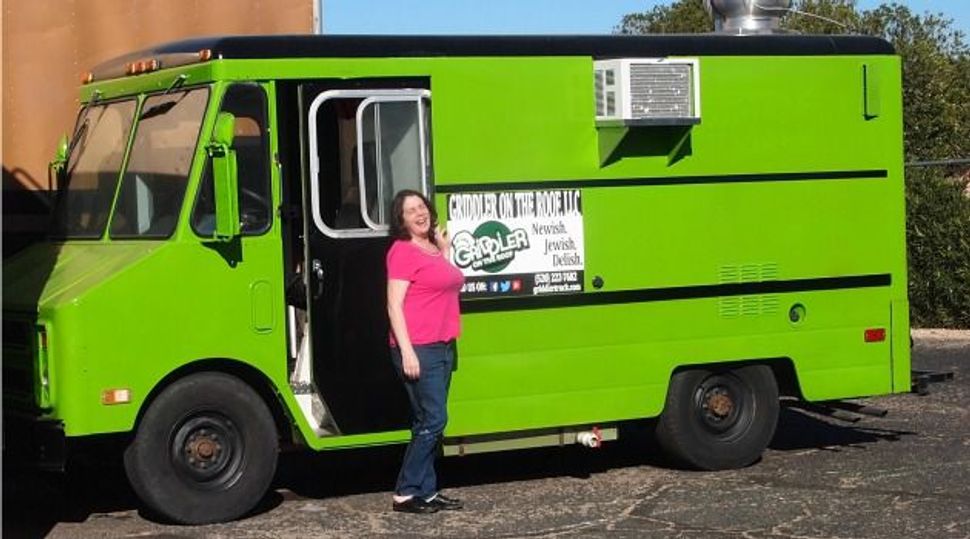 Kim Bayne in front of her food truck, which she dubbed Griddler on the Roof. Photographs courtesy of Kim Bayne

When Kim M. Bayne’s business and technology writing career hit a wall, only the force of a food truck could break through her professional slump.

The Tucson, Arizona, native had a strong interest in food on wheels, which she explored at first through writing — Bayne has been a correspondent for The Food Network’s Eat Street blog, she founded Street Food Files, and she coordinated social media for TucsonFoodTrucks.com.

Still, she felt something was missing.

“I was suffering from a credibility gap,” Bayne said. Writing about food without preparing it herself was no longer going to cut it.

“Other than being a home cook with a Jewish heritage, I don’t have a chef’s background,” she said, laughing. “I thought, ‘I really want to try this food truck thing!’” With that, she launched her new career.

At first, Bayne said, she thought about waffles. “But I couldn’t get excited about it,” she said.

In the end, her solution came from a handwritten letter she stumbled upon, from her Russian grandmother, that contained a recipe. Bayne had an “oh my God!” moment, realizing she had all of her grandmother’s and mother’s recipes. “There’s slim pickings in Tucson when it comes to Jewish cuisine, and suddenly I found my passion, and that was going to be my food truck.”

Griddler on the Roof was born.

Tucson has a large hispanic population, but there are an array of Jewish denominations practicing in the city as well, Bayne said.

“When I was looking around for a commercial kitchen,” she said, “one of the owners asked me what kind of cuisine I was preparing. I told him ‘Jewish’ and there was this deer-in-headlights look like, ‘huh?’” Bayne realized that the Jewish community would understand her concept and be her main market.

“I have a litmus test,” she said. “When I tell someone my truck is called Griddler on the Roof and they say ‘Oh, so, breakfast food?’ or… think I’m a roofing contractor, then I know I have an opportunity to educate people. This is fun for me.”

Bayne wants to introduce a wider audience to Jewish cuisine, and in doing so she’s educating herself as well. She said her concept of Jewish cuisine had been largely Ashkenazi. Now she is exploring Jewish food around the world, from Latin America to Africa to the Middle East. Her enthusiasm for international Jewish food is boundless, she said.

After launching in November, taking a step back in December to refine her process, and relaunching this month, Bayne has found the best business model for now is catering specific events. Her team is small — she, her husband and daughter run the truck themselves. “I’m starting to get good at recognizing which recipes will work on a truck and which won’t.”

The events she caters are not just synagogue-central. Bayne has found her customers also include adventurous Tucson eaters, ex-New Yorkers who miss the cuisine and people who have heard how great the grub is. The menu changes often, and Bayne adjusts the menu for specific events. Some staples include cheese blintzes, pastrami on rye with chipotle-ranch dressing and matzo balls. She’s constantly playing with recipes to make them more local, modern or healthy.

“Experimenting is one of the most exciting aspects of running this food truck,” she said. She concerns herself with the health factor in moderation, explaining: “Schmaltz is necessary for flavor!”