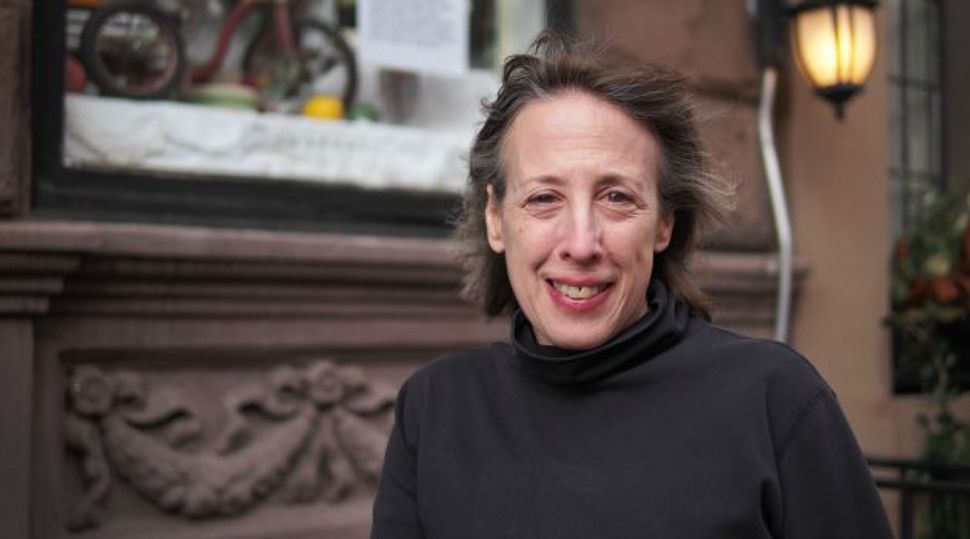 Bookshop owner Bonnie Slotnick took a quick break from packing to have her picture taken outside the 10th Street store. Photographs by Liza Schoenfein

I was happy to read at the end of last week that Bonnie Slotnick Cookbooks, the beloved little shop on West 10th Street that recently lost its lease, had found new digs and would soon be reopening. I scanned the Grub Street piece with avid interest, and when I got to the middle I did a double-take.

“Slotnick confirms she has signed a lease on a new space at 28 East 2nd Street,” the article said.

I knew that address.

“Her new landlords,” it went on, “who are the children of late Times editor Eden Ross Lipson, reached out to her after reading about the eviction.”

I knew Eden Ross Lipson — alas just a little — because she used to be the landlord and great friend of my great friends Dan and Tia.

Slotnick doesn’t like her hands, but they’re beautiful and busy as they carefully pack cookbook after cookbook.

I watched Dan and Tia get married in the house’s garden, and celebrated in Eden’s upstairs apartment, where she hosted the reception. I attended the christening of Dan and Tia’s first son in that garden. And when Dan had an art gallery in the downstairs space, I attended the openings and once walked out carrying a fine little picture, my wallet a couple of hundred dollars lighter.

The gallery (what will become the bookstore) had a door that led out to the garden, as did Dan and Tia’s parlor-floor apartment. (I remember a precipitously pitched metal staircase leading down to the enchanting oasis.)

Removing books from a high shelf at the old store.

Eden’s children, Margo and Garth Johnston, contacted Slotnick when they heard about her situation. “When we met and all agreed, Garth said, ‘I guess this is when we have to shake hands,’ and I said, ‘No, I have to hug you,’ ” Slotnick said.

“I’ve seen other people post that they knew Eden and she would have loved this so much. I think that’s what’s making her kids so happy, not only that they’re like her, but that they’d do something that would please her so much.”

Without a doubt, Bonnie Slotnick is trading up.

“It’s three times the space, three times the floor area,” she said. “It has room for a table and chairs in the middle of the room, and reading nooks and the garden. I’m looking forward to planting in the spring. It’s just a few steps up to the garden.”

Some of the many treasures awaiting their turn to be packed for the new East Village space.

What’s the best thing about the new space? I asked.

“The love,” Slotnick answered quickly. “The new space has the love that I never got from my old landlord. I hate to call them landlords — they’re the people upstairs. (Well, Margo lives upstairs.)”

Just as I was about to hit “Publish” on this article, an email came in from Tia, who wrote, “It was at Bonnie’s shop, after Eden died, that I found the vintage cookbook called ‘Kitchen Suppers’ that contained a recipe for fried red tomatoes, very similar to Eden’s recipe, which we enjoyed in summer and which is among our most favorite of all those she shared with us.”

“There’s a lot of confluence and synchronicity going on,” Slotnick had already said to me. Indeed there is.