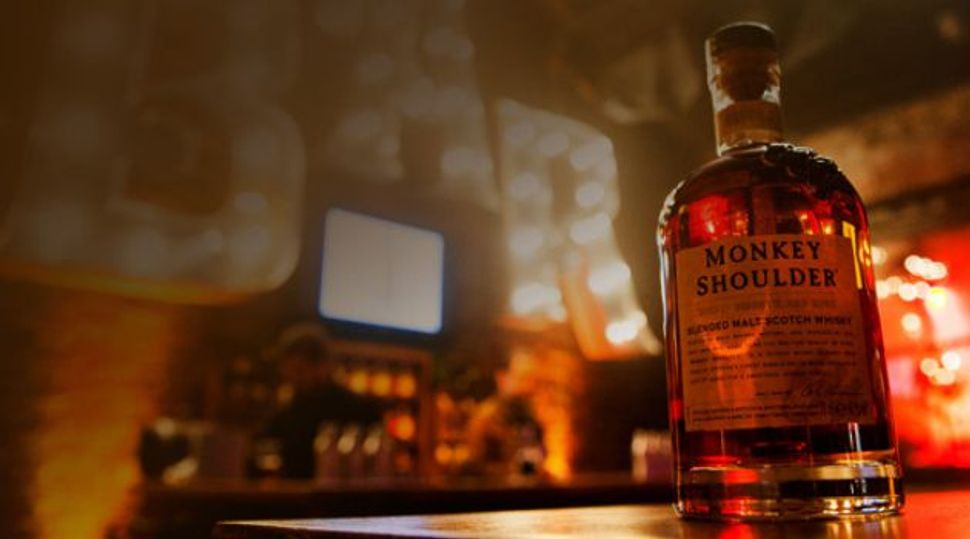 A recent addition to the American market, Monkey Shoulder is a blend of three single malts.

I had whisky plans with a highly agreeable chap I hadn’t seen since the autumn.

“My good fellow, you seem in fine fettle,” I greeted him.

“Likewise, I’m sure.” He responded.

We sat at a banquette that locals call a booth.

We started our drinking with the young pretender, Monkey Shoulder. I was excited to see it on the menu and, more importantly, actually on the shelf of our depleted tavern as I’d heard about it in the New Year as a tasty and good value option that hadn’t been available in America until recently. A blend of three quality Single Malts — Glenfiddich, Balvenie and Kininvie — it comes of good stock.

Caramel notes on the tongue but then a confusion of flavors, like a tangle of wires heading in whisky directions. No discernible finish, just a dissolute fanfare of malty tones blaring briefly into the palate. A mild disappointment. Perhaps a veneer of woodiness. The most amusing thing is the name, born not of an ingredient, but of a muscular ailment caused by stirring the barley.

“And our mutual friends?”

“I’ve spoken to some, but not for years.”

Lagavulin, from the Scottish island of Islay.

A smoky aroma of the Lagavulin 16 wafted over the table. Our young waiter, with fashionable facial hair, remarked that this liquid fire from southern Islay was the whisky of choice of someone called Ron Swanson, in the show “Parks and Recreation,” following the predilections of Nick Offerman, who plays the rôle on television.

A taste of toffee and bonfires, a lingering finish of charcoal that is unsurprising in a single malt Islay, but distinctive even among its peaty brethren. A development of dark flavors as the taste carries you up on its smoke from the bonfire to the wooden chimney and out to the delicious island sky.

“But, sir, there is no argument, you are entirely lacking in disputation!”

“Won’t you disagree for the sake of the series?”

“And what, pray, would my remuneration be?”

“The pleasure of my company.”

Motto: You get what you pay for.