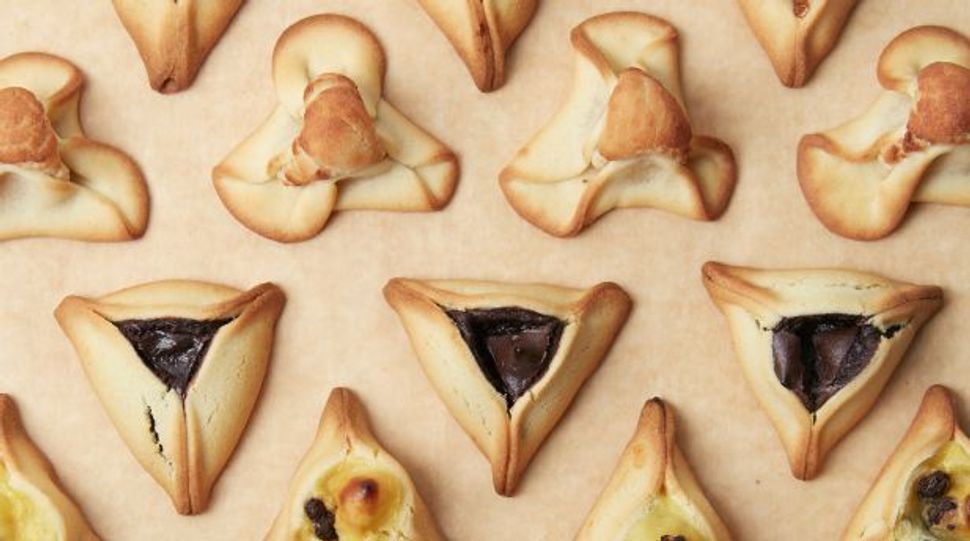 Breads Bakery, whose hamantaschen are pictured above, will operate three food concessions at the Armory Show, which falls on Purim this year. Photograph courtesy of Breads Bakery.

A very serious art show will get a little Purim spirit this year.

Breads, the Israeli-owned bakery near Union Square, will serve its highly praised hamantaschen at the Armory Show, the chichi contemporary art fair that calls itself “one of the most important annual art events in New York.”

It’s a first for both Breads and the Armory Show, whose dates coincide with Purim this year. Breads will operate three food concessions at the show; along with hamantaschen, the bakery will offer baked goods like babka and croissants, plus sandwiches, salads and sweets.

According to Eater, Shaya opened its doors last week, with Semitic staples like shakshuka, matzo ball soup and Israeli salad on the menu, along with “North African, Bulgarian and Polish influences,” according to Eater. “I’d say the signature dish at Shaya may be the wood fired pita bread made to order for each table, along with our selection of salatim (salads and spreads for the table) that will be constantly rotating depending on the season,” Shaya told the Forward by email.

How will New Orleans diners — more accustomed to straight-up Southern fare than creative Israeli cooking — respond? “I think people will love it,” Shaya said. “I’ve been hearing for years from customers that they’re looking for a great farm-to-table restaurant that satisfied their cravings for Mediterranean and Middle Eastern. Shaya does that but also gets into Eastern Europe and the Persian Gulf as well. It has always been what I’ve wanted to cook for them.”

…Montreal’s getting a new kosher café. Named for owner Iris Loutati, Iris-istible is slated to open this month in Snowdon, just northwest of downtown. “Iris-istible will offer not only fresh pastries, muffins, croissants, soups, salads and sandwiches, but a wide variety of fresh gluten-free baked goods… All products are either parve or cholov Israel, including the for-fainting chocolates,” reads an announcement on MK.ca, the web site of Canada’s largest kosher certifier….

…Jewish culinary machers dot the list of this year’s [James Beard Foundation Restaurant and Chef Award semifinalists, which the foodie powerhouse announced last week. Among them: Michael Solomonov, for outstanding chef at Zahav, his Philadelphia modern-Israeli joint; Mark Furstenberg for outstanding baker at Washington, DC’s Bread Furst; and Zachary Golper at Brooklyn’s Bien Cuit in the same category. “I’m politely trying to say that I’m a bad Jew,” Stollen joked to Serious Eats in a December story on why he loves stollen, the German yeasted holiday fruitcake.

…After lighting up New York with The Smile and sprinkling the Big Apple with Black Seed Bagels — his partnership with deli king Noah Bernamoff — Matt Kliegman is going Italian. Eater reports that Kliegman and Michelin-starred chef Missy Robbins will open Lilia in Williamsburg, Brooklyn; its menu will “very heavily” focus on pasta, Robbins told Eater…

…Call it the “inti-foodah.” A kosher food-cart vendor is accusing a “halal mafia” of stopping him from hawking his wares in Midtown Manhattan, the New York Post is reporting.

Yisroel Mordowitz, who sells brisket and pastrami sandwiches from his Holy Rollers cart near Rockefeller Center, told the paper he’s been “terrorized” by mostly Egyptian competitors who squat on curbs or use umbrellas and cartons to block him. “Why doesn’t he go to 47th Street?” shouted a vendor named Mohamed Mossad, referring to the Hasid-heavy Diamond District, the Post reported.

Mordowitz, meanwhile, has apparently been wandering from corner to corner in Midtown, trying to find a peaceful spot to sell sandwiches.

…Full Belly Deli, the sole Jewish delicatessen in Portland, Maine, has shuttered after 28 years. Owner David Rosen told the Portland Press-Herald the deli fell victim to the economy, rising food prices and competition from the chain restaurants that have proliferated nearby. “It was a place to ‘fress’… and to ‘schmooze’ or ‘kibitz’… not only for the Jewish community but for their many fans,” a local rabbi told the paper.

…Back in October, we reported (https://forward.com/food/207394/kosher-barbecue-comes-to-crown-heights/) on the soon-to-open Izzy’s BBQ Addiction (https://www.facebook.com/izzysbbq), NYC’s first stand-alone kosher barbecue joint. At least it was supposed to open soon. “We still don’t have an opening date, unfortunately,” owner and BBQ fanatic Sruli Eidelman told the Forward this week. The Daily News reported that “strict zoning and permit regulations” bear most of the blame for the seemingly endless wait. Stay tuned…