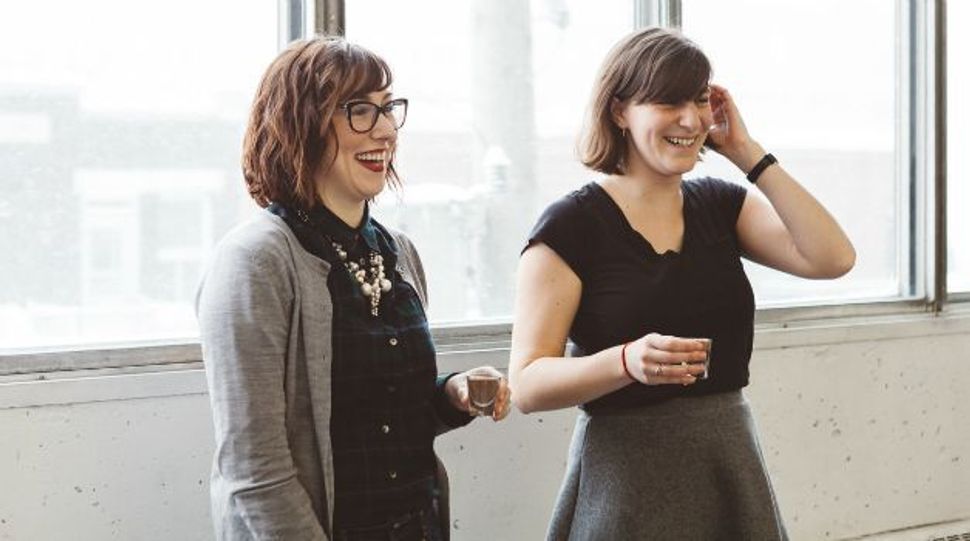 They’re not trained as chefs. They haven’t cooked in restaurants. But Sydney Warshaw and Katherine Romanow are becoming two of the biggest machers in Montreal’s burgeoning Jewish food scene.

As The Wandering Chew, the duo stages pop-up events that “try to teach people about the variety of food that makes up Jewish cuisine,” Romanow told the Forward. “It’s more than the Ashkenazi staples everyone thinks about when they think Jewish food.”

With that in mind, Wandering Chew events have strayed all over the Semitic map, from an Iraqi-Jewish feast — the pair’s 2013 debut dinner — to a Mexican-Jewish fiesta to a Scandinavian-Jewish brunch.

“We interview people from each community we choose, to get their food stories and recipes,” Romanow explained. “Then we prepare a menu from recipes we’ve been given. We do play around with formulas a little. It’s important for us that food is really delicious. We have a dual mission of showing people there’s this diversity — introducing them to dishes they wouldn’t have thought of as Jewish — and also cooking great food.”

The first course was engreeyeh, translated as sweet-and-sour eggplant cooked in a sauce of onions, tomatoes, sugar and lemon, served with crispy Iraqi rice. Kubbeh — rice flour dumplings stuffed with beef and parsley or onion and mushrooms — arrived next served in rich pumpkin stew.

For dessert, guests savored muhallabi, the almond-milk pudding flavored with cardamom, rosewater and vanilla, and garnished with pistachios and cardamom — all washed down with mint tea.

The Wandering Chew itself was cooked up as the happy outcome of a failed experiment. “Syd and I took part in a three-day incubator offered by NU Montreal for 20 young Jews,” Romanow said. NU bills itself as “a catalytic think tank… to rethink and push the boundaries of meaningful Jewish experiences for the Millennial generation.” “At end of it,” she said, “we had to come up with a project that would engage other young Jews. We got on a team together and came up with this idea.”

The duo lost NU’s funding competition, but applied for — and won — seed money from the Jewish Community Foundation of Montreal, whose mission is “to inspire, promote and innovate Jewish philanthropy”. “We chose to do the Iraqi dinner first because we were thinking of Middle Eastern and North-African communities in Montreal,” said Romanow, who works at the Museum of Jewish Montreal by day. “Moroccans are most prominent here, but which others are here that people don’t really know about? My thesis adviser does work on Iraqi communities, so we knew there was interesting stuff going on there, and she got us in touch with people.”

Most recently, The Wandering Chew recreated a Montreal Moroccan-style pastry shop at a pop-up gallery event for Sacre Profane, a Montreal gallery show exploring the life and music of Salomon Amzallag, who was a “cantor by day, Moroccan pop star by night,” as the Forward reported.

What’s next for the peripatetic pair? “We’re thinking about doing an Italian Jewish dinner,” Romanow said. “There are some Italian Jews in Montreal, and it’s interesting for me because my mother’s side of the family is Italian — I wasn’t raised Jewish, but converted last summer. I’m excited to bring those two sides of the family together.”

With Passover approaching, are friends expecting Warshaw and Romanow to whip up a killer seder? “We’re so busy with these dinners, we barely have time to cook for ourselves,” Romanow laughs. “But we’re thinking about making a dinner for our parents — they’ve done so much to help make all this possible.”