A Jewish Perspective on Preserving 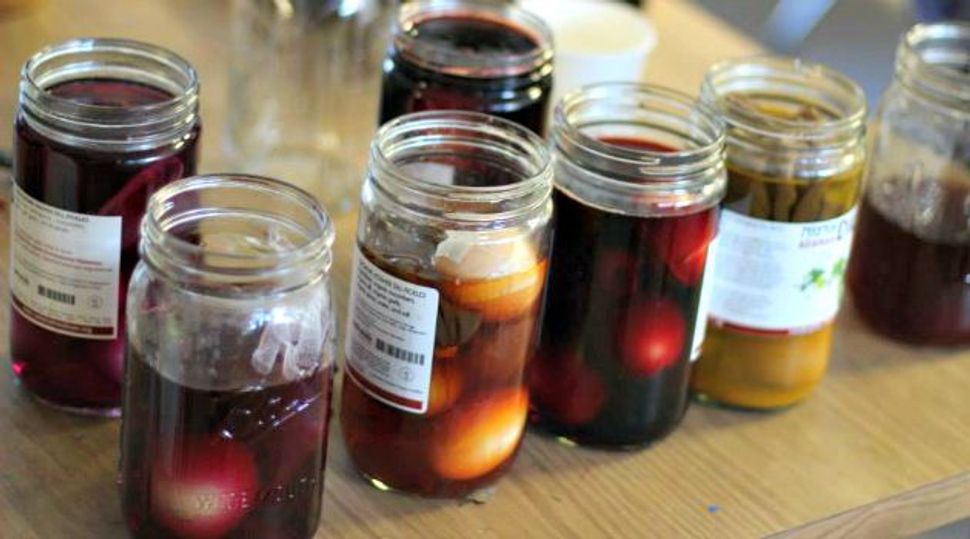 Two hundred pounds of tomatoes. Some big and red and juicy, some yellow, some tiny cherry tomatoes, a pile of colorful beefsteaks and even a box of ripe green tomatoes with beautiful dark green veins.

This summer, two hundred pounds of tomatoes passed through our kitchen. And over the course of three weeks, our shelves got overwhelmed with tomato sauce, salsa and dried tomato chips.

Not to mention the two hundred fifty pounds of apples.

I wouldn’t want you to get the wrong impression: I haven’t always focused on preserving produce when it’s in season. My passion for canning and preserving represents a new stage in my life. Growing up, most of the cans I interacted with were either full of processed beets and green beans from the grocery store, or empty…and being kicked down an empty alley in a fierce game of Kick-the-Can.

The first time I realized I could can food at home, I was participating in the ADAMAH Jewish environmental fellowship, where I worked as an apprentice on a Jewish farm for three months. One of the products the farm produced was blueberry jam, which is stored using the canning process. I remember standing in the industrial kitchen stirring a giant pot of blueberries for well over an hour, splashes of blueberry juice painting my clothing progressively more purple.

Blueberries are ripe in August, but they just don’t grow here in February or March. That blueberry jam I made could be eaten through the winter, long after the blueberry harvest had ended. A few weeks ago, I served a blueberry pie for Shabbat — and it was made with the blueberry pie filling we canned this past August. If I want local blueberries in winter, I need to think ahead.

That’s the great, unseen benefit of canning: It forces us to ask not just where our food comes from, but when. My blueberry pie in February is not just delicious — it also deeply changes the way I interact with my food. Similarly, between September and June, when tomatoes are out of season, I only eat tomatoes that my wife and I canned during the summer.

Choosing to can and preserve food isn’t just a powerful personal statement, but can also inspire us to get in touch with our own Jewish ritual and practice. It turns out that food preservation and seasonality have been a part of Jewish dialogue for thousands of years.

The shmita year, the biblical sabbatical we’re currently observing, offers an excellent example. The earliest rabbinic discussions about shmita — ten chapters of oral law — largely revolve around agricultural timing. During the shmita year, the entire population is expected to live off of food widely available for foraging. The rabbis ask: At what point in the year will fruits ripen and be available to the population? What if fruit trees in one area of Israel stop producing fruit before trees in other areas?

The agricultural laws of shmita don’t apply outside the land of Israel. But the rabbi’s deep intimacy with the rhythms of the land should inspire us to be more aware of food seasonality, of what grows when.

Note: If you decide to try your hand at canning, safety is paramount: you must use a published recipe that’s certified for canning. Be sure to do your homework on the canning process and follow the instructions carefully.

Jacob Siegel is a student at Yeshivat Chovevei Torah, an open and modern Orthodox rabbinical school. He is also a certified shochet (kosher slaughterer), and offers demonstrations and workshops across the country on kosher sustainable meat.

A Jewish Perspective on Preserving