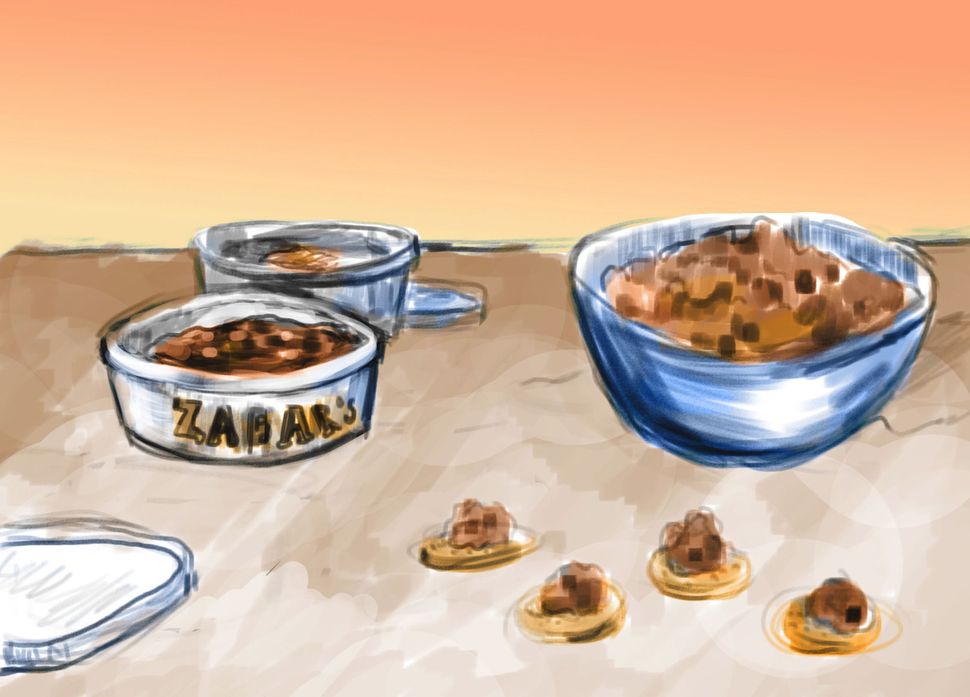 Here are the results of , based on a survey of five retail sources in New York. Samples were purchased, listed ingredients noted, and each rendition tasted, chewed, and graded, measured, using a reconstruction of the precious Ashkenazi prototype. For control purposes, an upscale vendor on the city’s Upper East Side was included in the research, to assure that what’s on sale to elites was evaluated alongside the working man’s chopped liver.

Please note that what follows is entirely one man’s opinion. I encourage you to embark on your own quest, and let me know if you encounter le vrai foie hache.

1) Fairway. After years of including mayonnaise in its foie haché, Fairway took a strong step forward a while ago by eliminating it, thereby coming closer to the real thing. But Fairway has much work to do. This West Side hub for populists, Pilates instructors, penthouse dwellers and working stiffs adds sugar to its livers — a definite no-no in Alsace Lorraine — plus a preservative, citric acid, and water. Water? Onion and chicken fat are on the ingredients list — a good thing, honoring CL’s heritage.

Fairway’s is an industrial chopped liver. It is blended smooth, thus you’re buying a “spread,” with “natural flavor” added. (How do you add natural flavor? Where do you buy it?) This CL has the longest ingredients list in the study. But in essence it is a mediocre, sweetened pâté, a degraded relative of the archetypal conception, and is therefore decidedly mid-ranking. No one who knew the real thing would be drawn to it. Grade: C-.

2) Zabar’s. Zabar’s isn’t true to tradition, either. Its livers are not chopped. Instead, they are subjected to a merciless grinding similar to that endured by the coffee beans at the rear of the store. An industrial processor — not your grandmother’s chopping blade — reduces the livers to more-or-less uniform pieces. Whereas Fairway’s product is as smooth as Smucker’s “creamy” peanut butter, Zabar’s is a clunky, sticky mélange, drier than the archetypal liver of childhood memory. The latter had heartiness and vitality, it would break off in clusters at the touch of a fork, rather than sticking together as though mucilage had been applied, like Zabar’s does.

This chopped liver is sterile and synthetic. It feels pounded rather than chopped, and harshly pressed down, by rough machinery. No one’s grandmother helped it come into being, with tender hands. What’s more, this CL offers merely a scant suggestion of hard boiled eggs, and only a suspicion of onion.

In our time, courage and commitment and grit and a strong sense of cultural identity are needed to produce a pungent, zesty, coarse and chewable Gehakte leber. Zabar’s can’t seem to muster the single-minded determination required to keep the past alive. Too many of its efforts to evoke the old time Yiddish kitchen are embalmed in plastic coffins.

But don’t give up. There is hope at Zabar’s. True, its livers, like its rugelach, challah, matzoh balls and stuffed cabbage, have been battered by the forces of modernity. But its chopped liver, at least, can be rescued and improved by the tender touch of those who add home-diced onions, softly sautéed in homemade schmaltz, with morsels of crisp apples -— thereby producing a chopped liver brought to life in the home kitchen, counteracting the trauma inflicted by harsh, unfeeling machines and those deracinating containers.
Grade: B. With a gentle and knowing touch, Zabar’s chopped liver can rise to B plus level.

3) Kosher Marketplace. Kosher Marketplace has something special to offer. In this Broadway shop, a wonderful opportunity awaits the knowledgeable CL lover. You can begin at the 11th-century beginning, because you can work with pure, whole broiled chicken livers. They’re packed and wrapped, but their certain destiny is the hand-held chopper. They are toasty, with a browned crust, as in times gone by. You can take these livers home and do the right thing by them — add some raw apple pieces; add chop hard-boiled eggs; add schmaltz and gribenes.

Kosher Marketplace’s decision to broil rather than grill or fry, is testament to its faith that the home cook will chop and chop and chop, and boil the eggs and add the fat and soften the onions. You can sing-along.
Grade: A, though this is for sure a different category from the others.

(4) Kosher Marketplace also sells its own version of prepared chopped liver. A pretty good product, but alas, the list of ingredients includes sugar. Otherwise, this chopped liver is okay. It includes eggs and onions. No extras or additives. It’s the yellowest chopped liver in the study, perhaps because of the many tiny bits of boiled egg yolks combined with beads of finely ground liver. The liver is definitely broiled.
Grade: B+. (The one to get if you don’t want to buy the broiled livers and make your own. Elbow grease.)

(5) Eli Zabar. Eli dolls up his livers. His Upper East Side onions aren’t sautéed. Sautéing isn’t good enough for them, they’re caramelized. Alas, the sautéing is done in butter. Moreover, instead of schmaltz, the carriage trade gets mayonnaise. I asked Eli whether he makes the mayo. “Heck no, it’s Hellman’s, the only brand I use.” At least there’s no water (Fairway’s moistening agent). Eli’s CL is the wettest in the study, and the highest-priced.

Eli’s on Third Avenue has a kosher bread-baking oven at the front of the store — enclosed within glass walls. Kosher breads (including a delicious challah), are kneaded and baked by Sabbath observers, separated by the mechitzah from the treyf consumables that dominate the store’s main selling space. Eli’s is modernity: It evokes (and exploits) memories of old-time Jewish foods, to produce a synthetic and pseudo product that satisfies “cultural” Jews who live outside of Torah. Taste and ‘lifestyle’ trump the real thing.
Grade: B-/C+.