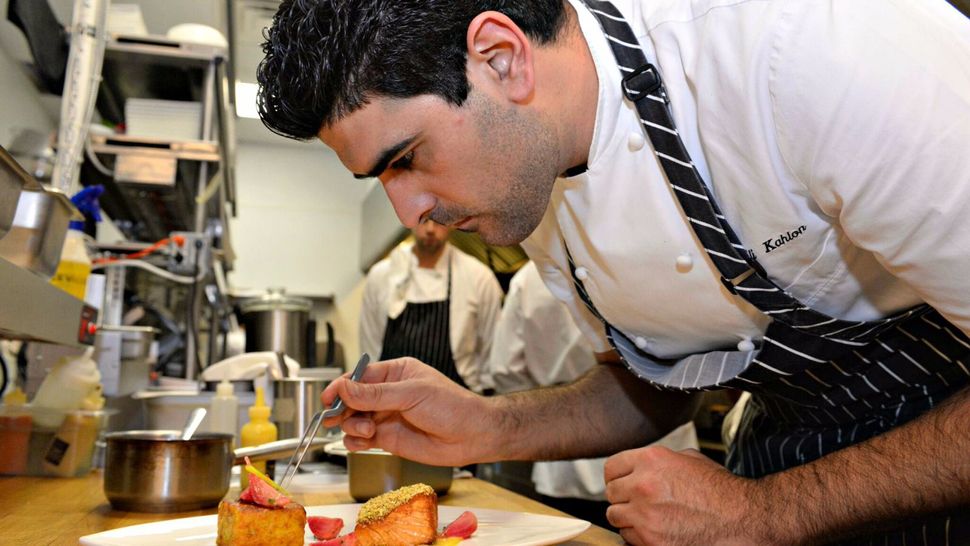 Chef Elie Kahlon of Novo puts the finishing touch on a salmon dish.

Diners at Novo, in Ridgewood, New Jersey, likely appreciate the spices, imported from the Middle East, that accent their meals. Some might even be aware that their food was cooked on an open-flame oven called a taboon or that a special Arabic steamer was used to prepare the couscous.

But will they get that every dish comes with a heavy dollop of memory, forged in the Israeli-born chef’s upbringing? Hard to say. But the chef in question, Elie Kahlon, certainly hopes so.

But for the Middle Eastern music that’s piped into the dining room at Novo, the restaurant/s look and feel seem less Mediterranean than American contemporary, with modern fixtures lighting chic wooden tables. Yet it all works quite well, thank you.

In fact, the Record, the local paper, recently called Novo “arguably North Jersey’s best new restaurant.” It had been In business less than half a year when it earned 3½ out of 4 stars from the paper’s restaurant critic last January.

Novo’s genesis took place on a relatively remote agricultural moshav in Israel populated primarily by North African Jews. “We could see Gaza from the second floor” of our home, said Kahlon, his roots evident in his accented English. At 6-foot 4-inches, he is NBA tall and sports a stylish day or so growth on his cheeks. His father, from Libya, is “a religious man. He prays two or three times a day, “ Kahlon said. But it was his mother, from Tunisia, who instilled a love of food and cooking. 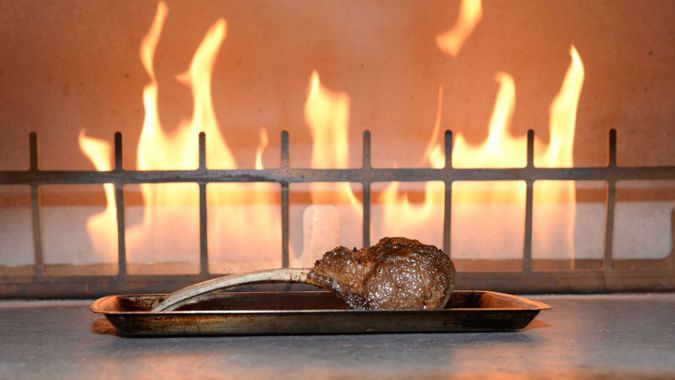 Lamb chops cooked over an open-fire oven called a taboon.

“Food was an important thing in my home,” he added. With seven children — Kahlon has three brothers and three sisters — and lots of guests on weekends, his mom spent a lot of time in the kitchen. Among the memories Kahlon brings to his tables today are the countless times he helped prepare for Shabbat. They’d start Thursday afternoons readying lamb, chicken, fresh vegetables and fruits — ultimately enough for several meals: Friday night, a big lunch Saturday and dinner before Yigdal service — often with enough left over for a Sunday meal as well.

It wasn’t just the cooking that inspired the him. “I learned a lot about how to be a chef by working on a farm,” Kahlon said. “It was a gift to be able to recognize freshness, when to serve… It gave me a big plus in experience.”

Between high school and compulsory military service, Kahlon received his first — you should pardon the expression — taste of the business. He worked at a restaurant that his brother opened and found his calling. “I just started to like it,” he said. “I had the opportunity to work in the kitchen and found this is my place. This is where I feel safe.”

So after three years as an air force mechanic, Kahlon enrolled in a culinary institute just outside Tel Aviv. It was not a choice that pleased his parents, because it meant their son would now be working with (and presumably eating) non-kosher foods and working on the Sabbath. But, as Kahlon said, he’d stopped wearing a kippah when he was 15 years old, so this shouldn’t have come as a complete surprise to his folks.

After finishing the one-year course, he worked in the kitchen of several upscale Israeli restaurants, but his ambitions exceeded local possibilities. “I was all about fine dining, Michelin-starred restaurants,” he said.

So Kahlon came to New York and worked at several high-end spots including Balaboosta (owned by another Israeli-born chef, Einat Admony) and the Gordon Ramsay Restaurant at the London Hotel. He learned a great deal — and throwing plates and tantrums was not among them, if you’re wondering. He does admit that “show time is show time. When one of the cooks makes a mistake, my voice does get a little louder.”

Kahlon followed those jobs with a gig as the personal chef for a Russian oligarch. It was a tremendous opportunity on a number of levels, he said. He traveled around the world on private jets, visiting Russia, Spain, Israel and all over the U.S. It also brought him to the attention of Rafael Cohen, a restaurateur who was then in the process of opening a Mediterranean-style restaurant in Westwood, N.J., also in Bergen County.

He brought Kahlon in to consult on the menu. “He liked me,” Kahlon recalled. “He liked the way I cooked. He liked that I bring some food from Israel.”

Cohen offered to help finance a spot of Kahlon’s own. The restaurateur and his partners found the location in Ridgewood and were “willing to pay a few dollars more” for authenticity, Kahlon said, adding, “I was trying to bring the real thing here, to use the same paprika, the same steamer to make couscous the way we make it in Israel.”

He doesn’t prepare “Jewish food,” he said, but Israeli food. “Jews came from all over the world and brought their food with them.”

So he resists labels and instead says, “it’s all one world.”

So the menu includes everything from a “haloumi cigars” appetizer (Mediterranean spring rolls with haloumi cheese, spinach, zucchini and a cashew dipping sauce) for $13 to lamb chops in a date eggplant puree, along with homemade lamb bacon, for $38.

“This is the way I grew up,” he said. “I didn’t grow up with that flavor. I think you can cook a lot of things without pork.”

How does he explain shellfish?

Fear could have been another red light, but Kahlon had to get past it. The chef admits to experiencing a certain trepidation before opening. “When I first came to Ridgewood, I asked, who is going to appreciate my food?” he said. “I’m trying to bring something new. Will people want to come here and explore the new flavors that I cook?”

“People told me they were scared to try it, that they’d had bad experiences with food with a lot of spices. But we can give them an opportunity to experience that [in a good way].”

First Ridgewood and then the world — or at least New York. Kahlon has his sights on the Big Apple. Meanwhile, the Michelin reviewers will have to trek across the George Washington Bridge.